“May you live in interesting times.” Whatever the origin of the expression, it is doubtful it was first uttered in the context of dealmaking. Trade wars, rising interest rates and weak oil and gas prices are just some of the recent global developments influencing deal activity in Canada—and in some cases, not always for the better. Nevertheless, the Canadian markets are evolving amid broad geopolitical uncertainty, and we expect dealmaking momentum to continue through 2019.1

Despite potential headwinds, including regulatory uncertainty, major changes to international trade, like USMCA, and full-on trade wars among some of the world’s biggest economies, Canadian inbound and outbound investment remained at record levels in 2018.

Although foreign investment in Canadian public M&A (see Chart 1) decreased slightly in 2018, it is overall still at historically high levels. In terms of inbound investment from the U.S., the volume and aggregate value of deals from U.S. investors into Canada almost doubled year-over-year (see Chart 2). Going into 2019, we expect inbound investment from the U.S. to keep pace. Canada continues to be ranked highly by U.S. corporations and private equity firms as the market in which they will most likely pursue opportunities,2 and the favourable exchange rate should continue to draw interest from U.S. investors.

While Chinese investment into Canada has been significant in recent years (see Chart 3), the rejection by the federal government of the acquisition of leading construction firm Aecon by China Communications Construction Company and latest controversies involving Chinese telecoms giant Huawei have highlighted important issues. The current strained relations are likely to dampen deal activity somewhat in the short term. However, we expect that significant transactions will continue to be completed and that Chinese investment will continue to grow through 2019 and onward. Certain target sectors will continue to attract scrutiny from regulators, such as advanced technology, critical infrastructure, telecoms and aerospace and areas related to defense. For further information, see the article entitled “Chinese investment into Canada: balancing openness and security.” 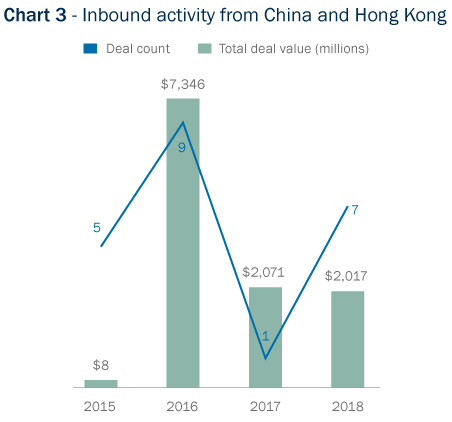 Although the aggregate volume of outbound deals may have dropped since the record high in 2017, it remains well above the number of deals for each year since 2010 (see Chart 4). The second half of 2018 saw some notable acquisitions of foreign targets by Canadian companies, including Brookfield Asset Management’s acquisition of Forest City Realty Trust for US$11.4 billion.3 In 2019, we expect increased momentum in outbound investment, as Canadian companies look abroad for growth.

The legalization of cannabis for recreational use in October 2018 produced an unsurprising surge of cannabis M&A in Canada. Given the relative fragmentation in this industry and the expected legislation in October 2019 to permit the sale of edible cannabis products, we expect this momentum to continue in 2019.

While materials (which includes metals, mining, steel, chemicals and agriculture) continued to be the most active sector, the financial sector had the highest increase in activity year-over-year (see Chart 5). This increase reflects the ongoing importance of fintech as institutions buy technology assets to evolve their business and service offerings, and is an important driver of M&A deal activity. Demand for fintech is only set to increase as new products, including those which use blockchain and machine learning technologies, make their way to market. As demand increases, we expect cost for quality targets will rise.

M&A in the mining sector was active in 2018, including with the contested takeover bid for Nevsun and the blockbuster combination of Barrick and Randgold. The momentum has continued into 2019 with the recently announced combination of Newmont and Goldcorp. We expect that the deal making activity will grow through 2019 with further consolidation in the gold space and the desire of large and mid-tier base metals producers to bulk up with further acquisitions, particularly of new copper projects. 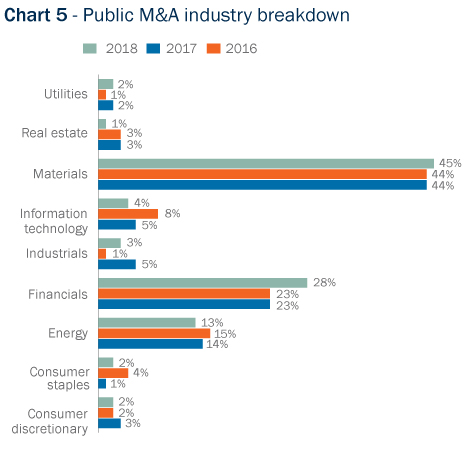 Hostile deal activity and consolidation in the oil patch

When the new bid regime under NI 62-104 came into effect in 2016, it was expected to have a chilling effect on hostile activity. Instead, we have seen hostile bid activity broadly consistent with levels experienced under the prior regime. Depressed valuations can drive increased levels of hostile bid activity as buyer and seller expectations regarding deal price diverge. The oil and gas sector, perhaps the starkest example of depressed valuations in Canada in recent years, saw the highest level of hostile activity in 2018. In 2019, we expect hostile activity in the energy sector to keep pace with activity in recent years as current low valuations and accretive deal metrics create an attractive environment for companies seeking acquisition opportunities.

Attractive valuations have also led to buying opportunities for energy companies, which are seeking to consolidate and focus their strategy. In 2019, this trend of consolidation and opportunistic buying should continue. We may also start seeing further consolidation focused on shale and natural gas assets. For more on M&A in this sector, see “State of Play in Canadian Oil and Gas M&A.”

Despite a strong start to the year, the credit market stalled in the fourth quarter of 2018, due to concerns about the economy, possible trade wars, and, in the case of fixed rate high-yield bonds, rising interest rates. The impact of these factors was most visible in market for larger syndicated loans and high-yield bonds: margins were up, documentation trends favored lenders, and larger deals were pulled or delayed. Underwriters of syndicated loans pay particularly close attention to syndication risk and broaden “flex” provisions in times of volatility to address the risk that markets will decline between the date of signing the commitment letter (and related acquisition agreement) and closing. But aggressive flex provisions make non-syndicated loan options (such as bilateral, unitranche and club deals) more attractive to sponsors and borrowers. In addition, rising interest rates affect markets differently: investors generally shy away from fixed rate bonds and rush towards floating rate loans when rates rise.

Nevertheless, the U.S. middle market and Canadian bank loan market have traditionally been slower to react to market volatility (just as they are slower to incorporate some of the most borrower-friendly terms in frothy markets), so we are bullish that deal activity will continue (even if on adjusted terms). Of course, higher pricing will affect all acquirors relying on financing as more expensive debt will require larger equity checks or lower acquisition bid prices. It is too early to know whether this is just a blip or the start of a longer trend. Going into 2019, there is still a lot of liquidity in the loan markets to fund deals from varied sources, and some debt sources may be increasingly attractive, so it remains to be seen exactly what effect credit market volatility will have on acquisition financing.

In 2018, both incidents relating to the #MeToo movement and cybersecurity breaches at public companies made headlines. As these types of crises are expensive and can have a negative impact on share price, market participants have started to take steps to reduce these risks, including in dealmaking. During the diligence phase, acquirors are seeking out more information regarding the target’s policies, governance practices, history of complaints and data breaches. #MeToo representations to the effect that no managers, directors or executives have been accused of harassment are becoming increasingly common in transaction agreements. Similarly, information about a target’s data protection systems and software has also come under increasing scrutiny during diligence and beyond.

Looking back: the 2018 markets in Canada

While 2018 started off slowly, Canadian public M&A activity gained momentum by the second quarter. By the end of the year, activity had surpassed the number of deals year-over-year, and came close to meeting 2017 by aggregate deal value ($193 billion, compared to $216 billion in 2017). Mega-deals, such as Thomson Reuters’ sale of an interest in its financial and risk business,4 contributed to aggregate deal value, consistent with the global trend. The Canadian mid-market was also busy in 2018, with transactions valued under $250 million continuing to represent the majority of M&A activity.

Strategic buyers were largely responsible for public M&A dealmaking in 2018, making up the vast majority of the investor pool in the domestic public market (see Chart 7).

Meanwhile, for the first time in recent years, private equity investors were more likely to be on the buy-side of a transaction in the Canadian private equity market, and exit activity declined significantly over 2017 levels (see Chart 8). 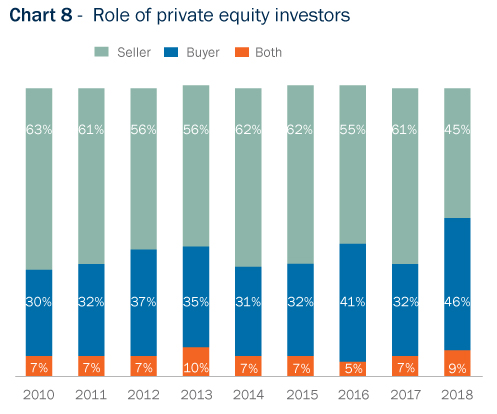 While shorter timeframes are becoming more common, there has also been an increase in funds with long-term hold periods for assets that are yield generating such as core real estate and infrastructure, though it remains to be seen whether funds with hold periods of over 10 years are here to stay. While these long-term funds may be useful to weather market cycles, it will be important for firms not to justify overpaying for an asset by putting it in a long-term fund. 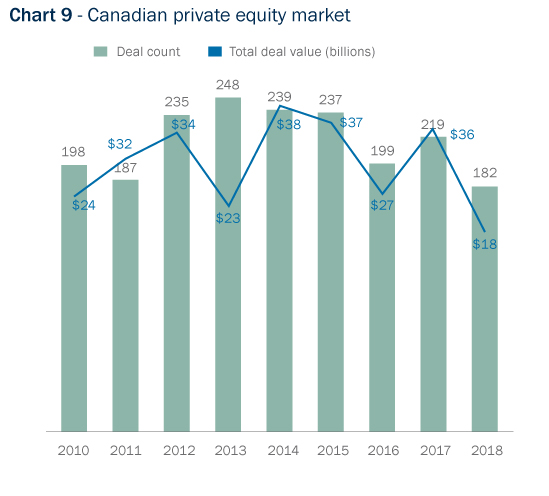 There is no denying that the nature of recent events has the potential to put downward pressure on dealmaking. While market conditions and the macro dynamics affecting them show no sign of calming, they may also lead to opportunities for Canadian companies in the year ahead: Canada continues to be seen as a stable place to do business; the exchange rate will draw ongoing interest from U.S. and European buyers; and Canada remains the only G7 nation that has legalized recreational cannabis, with huge potential for investment. Whatever “interesting times” 2019 reveals for business, it will no doubt come with its share of opportunity as well.

1 Data sourced from S&P Capital IQ. Year allocations are determined by announced date. All data exclude investments in new issues and include both acquisitions of, and exits from, Canadian targets by financial investors.