The extraordinary events of 2020 have amplified the profile of what was already expected to be a historic U.S. election. The pandemic and its many effects on the global economy and international relations loom large over both a turbulent America and its trading partners, including Canada.

M&A dealmaking experienced a sharp decline earlier this year as a result of the pandemic, though some deal activity has resumed heading into the last half of the year1. We have seen U.S. investment into Canada drop significantly in both deal volume and value (see Figure 1). 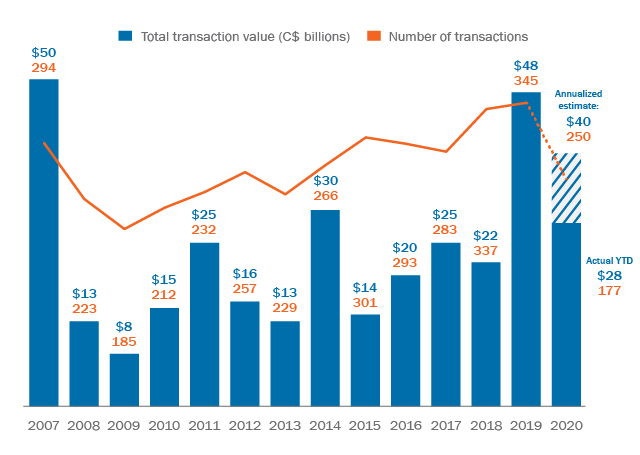 Meanwhile, Canadian investment into the United States also suffered as a result of the pandemic, though year-over-year activity in terms of volume saw a slightly softer decline (see Figure 2). While “southbound” cross-border dealmaking has slowed this year, deals continue to get done, though transaction sizes are substantially smaller on average than other recent years.

Figure 2 - Canadian investment in the U.S. 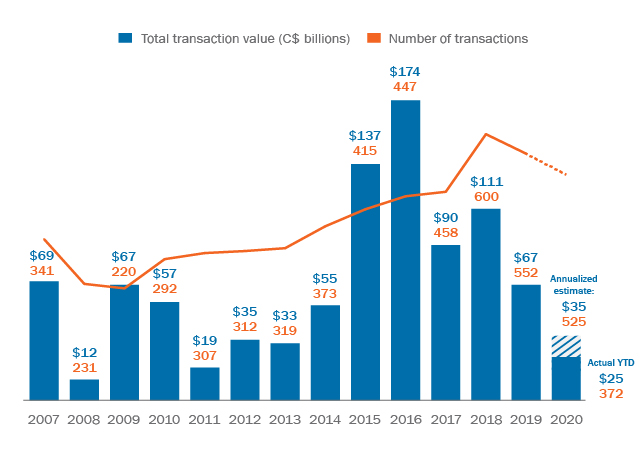 Against this backdrop, and with the U.S. elections just around the corner, we look at some of the issues at stake in the election and how they may affect business between the U.S. and Canada. Of course, these issues turn not only on the outcome of the presidential elections. Even if Biden ascends to the presidency, most of his campaign proposals are not likely to be implemented unless both houses of the U.S. Congress have a Democratic majority.

While specifics remain unknown on how a Biden administration might approach regulation of M&A processes in the United States, it is conceivable that it will bring a new level of empowerment for regulators in managing the economy—particularly in traditional areas of Democratic concern such as environmental regulation, healthcare and labor.

With that might come a desire for increased regulatory scrutiny, more disclosure and transparency expected from transacting companies, as well as a higher diligence burden corresponding to increased regulatory risk in areas that the Trump administration has been less focused on regulating.

Tax is a point of notable difference for the two presidential candidates and their parties. While many U.S. businesses have benefited from President Trump’s Tax Cuts and Jobs Act, Biden has announced an ambitious tax plan that would make a variety of changes to that legislation.

Key to Trump’s Tax Cuts and Jobs Act was decreasing the corporate tax rate to 21% from 35%. Biden has said he’d meet that difference halfway, with a proposed increase to 28%. This change, if enacted, could have significant impact on U.S. businesses’ cashflow and, accordingly, on Canadian businesses or investors looking to invest south of the border.

Biden has also announced plans to significantly increase taxes on high earner individuals. He would increase the top tax rate for compensation and ordinary income from 37% to 39.6% and increase the tax rate on long-term capital gain and qualified dividends from 20.0% to 39.6% for such individuals, a change that some expected would be a catalyst to M&A activity in 2020 as business owners seek to exit before rates go up. However, it is difficult to ascertain to what extent that expectation has been borne out given deal volume and value numbers for 2020 have been materially impacted by the pandemic.

To reiterate, as with other Biden proposals, any significant tax changes will require that Democrats retain control of the U.S. House of Representatives (which is expected) and take control of the Senate (which is uncertain).

The Trump administration has been targeting Chinese ownership of and investment in technological applications that collect the personal data of U.S. persons (President Trump’s approach to video-sharing app TikTok is the latest high-profile example)2. To do this, the administration has been leveraging the Committee on Foreign Investment in the United States (CFIUS) in its role to safeguard U.S. national security concerns related to foreign investment.

In the near term, Canadian investors should consider CFIUS oversight over similar technology and data-intensive businesses, particularly when in connection with Chinese investment. CFIUS’s focus on China, however, presents Canadian investors, many of whom are currently deemed “excepted investors” relieved of certain CFIUS requirements, with opportunities to facilitate their investments in the United States.

While it remains to be seen whether CFIUS will continue to play an outsized, and politicized, role in the event the upcoming U.S. election results in a change of administration, scrutiny of Chinese investment in the U.S. accelerated under former President Obama and, therefore, can be expected to remain a bipartisan priority well into the future.

The energy sector and climate change

If elected, Joe Biden appears set to invest more in renewable energy infrastructure and in particular has said that he would oppose the Keystone pipeline project from moving forward. Altogether this could have a further chilling effect on the state of oil and gas industry, not just in the United States, but also in Canada, where support for key pipelines between the two countries is widely seen as a critical step for improvement of Canada’s long-beleaguered oil and gas sector. While projects will still likely have a path forward, approach to energy resources and investment in the United States will likely change under a Biden presidency.

During the economic crisis created by the pandemic, private equity sponsors have increased their focus on distressed investments, seeking to capitalize particularly on assets that may be in temporary distress3. Similarly, they have pivoted to sectors that have weathered the crisis well, including healthcare, biotech and renewables. We would expect these trends to continue irrespective of the outcome of the U.S. elections.

As mentioned above, Biden’s tax plan contemplates raising corporate taxes to 28% and the corresponding decrease to corporate cash flows may negatively impact company valuations, including for PE-owned businesses.

Likewise, Biden’s plan to increase the long-term capital gains tax rate could well inform the timing of exit transactions for PE-owned companies, assuming the larger pandemic environment doesn’t get in the way.

Private equity sponsors have long been wary about how a Democratic trifecta in Washington D.C. would treat their carried interests. While Biden’s tax proposals do not expressly comment on eliminating the current tax treatment for carried or profits interests, Biden has proposed an increase to the long-term capital gain rate for those earning more than $1 million. That, in essence, has the effect of taxing carried interest at ordinary income tax rates. If enacted, these changes may result in private equity firms revising their investment models, and that in turn could have broader implications on valuations for transaction participants.

While Biden’s current stated plan for infrastructure is relatively light on details, he has committed to investing $2 trillion during his first term on modern, sustainable infrastructure and clean energy. His infrastructure plan focuses on expected sectors, including roads, water systems, municipal transit networks and universal broadband access, but also on areas outside the traditional definition of infrastructure. For example, the Biden plan would create incentives to upgrade residential and commercial buildings to make them more resistant to extreme weather and would fund research and development in precision agriculture.

Biden’s infrastructure plan is linked to his promises related to combatting climate change and rebuilding the American middle class. One of the stated goals is to create millions of new union jobs building and upgrading American infrastructure. On this basis, companies benefitting from his infrastructure and clean energy investments will need to meet the labor protections in Senator Merkley’s Good Jobs for 21st Century Energy Act, applying and strictly enforcing Davis-Bacon prevailing wage guidelines.

Big Tech has ended up in the political spotlight for a number of reasons: allegations of monopolistic practices, controversial use of data and privacy policy; the role of Big Tech in regulating free speech and the spread of misinformation are among those issues. As we look forward, these issues are likely to remain part of political debate—although neither Trump nor Biden have made specific statements suggesting that breaking up Big Tech or enhancing their regulation are top priorities in their platforms.

In a year marked by instability, and government response to the pandemic in countries around the world, the outcome of the U.S. election will be felt throughout the business community and may well end up impacting how businesses evaluate, negotiate and close transactions. Canadian businesses and U.S. companies with business in Canada will want to consider how they will adapt their cross-border strategies to the outcome of this historic election.