In 2017, the Canadian domestic M&A market experienced growth in the small and mid-market segments. This was especially the case in the private equity industry where the volume of transactions falling in the <C$100M value range rose by 35% year-over-year.1 We witnessed a similar trend in transactions that Torys advised on. The shift towards smaller-valued deals may be due to the over-heating of the mid-market, causing buyers to search for opportunistic investments in smaller targets where competition among potential buyers may be more moderate. Many sponsors have also pursued lower-valued add-on transactions, rather than platform acquisitions, building on existing investments to maximize returns.

To a certain extent the smaller deal sizes influenced our findings around general indemnity caps, i.e., the amount at which sellers were willing to cap their obligation to indemnify the purchaser for breaches of non-fundamental representations and warranties set out in the purchase agreement.

For transactions where the buyer did not purchase R&W insurance, the average indemnity cap was approximately one third of the transaction’s deal value, a relatively high threshold. Meanwhile, the median indemnity cap value was 25%.

At the same time, 2017 also saw an increase in the number of transactions with indemnity caps for breaches of non-fundamental representations and warranties falling in the “<10%” value range (see Indemnity Cap as a % of Transaction Value below). This was largely a function of transactions in which R&W insurance was purchased. These transactions yielded lower indemnity caps which fell, in all cases, below 5% of the deal value and the average indemnity cap was 1.1%.

From our experience we have seen that the use of R&W insurance in Canadian M&A transactions has grown significantly over the last few years. The increasingly competitive and crowded marketplace for quality investments has encouraged prospective buyers to turn to R&W insurance as a way to distinguish their bids in competitive auctions. Meanwhile, financial sellers have continued to take advantage of strong market conditions to dispose of their investments,2 with R&W insurance allowing sellers to significantly reduce their overall liability exposure post-closing.3 Together, these developments have given rise to smaller indemnity caps on transactions that are subject to R&W insurance. 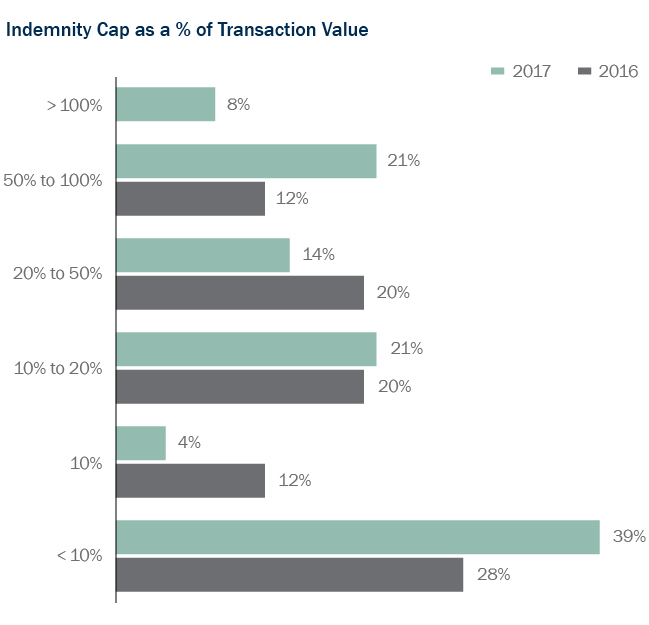 While Canadian M&A buyers have long succeeded in negotiating longer survival periods for breaches of non-fundamental representations and warranties than their U.S. counterparts, market practice in respect of indemnity survival periods on both sides of the Canada-U.S. border appears to be converging.

Although survival periods vary from deal to deal, 18 months was the most frequent survival period for non-fundamental representations and warranties in our 2017 deal sample (see General Indemnity Survival Period. This is in line with the general market practice in the United States according to the 2018 U.S. Private Target Mergers & Acquisitions Deal Points Study.4 We did, however, observe a meaningful increase in deals with longer survival periods of 24 months, deviating from the prior year’s findings. 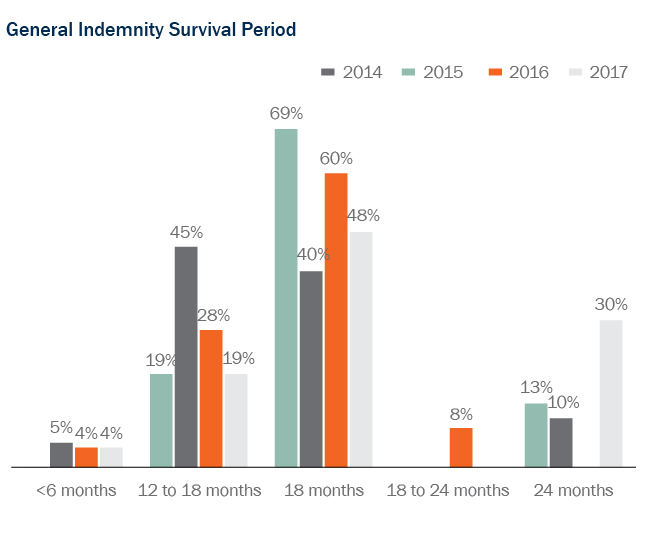 The convergence in deal terms can be explained, in part, by the rising frequency of cross-border transactions. Last year, investors from the United States continued to deploy a significant amount of capital in Canada, and many of the record-high investments in 2017 involved large-scale acquisitions by U.S. financial investors of Canadian targets.5

Similarly, basket sizes in our deal sample also tracked closely to U.S. market practice. In this ongoing sellers’ market, sellers continued to negotiate successfully for deductibles—where the buyer bears the amount of losses up to the deductible amount—rather than thresholds/tipping baskets. Deductibles were negotiated on 27% of our canvassed deals and thresholds were used in 18% of our deals. This was consistent with last year’s findings.

Sandbagging permits a purchaser to bring an indemnity claim for breach of a representation and warranty against the seller post-closing despite the purchaser having knowledge of that breach before closing. Most often parties will set this question aside, staying silent in their contract on whether or not the purchaser may “sandbag” and leaving the matter for the courts to decide if the issue gets litigated.

Our deal sample shows that this was the position taken in the vast majority of deals negotiated last year: most agreements were silent as to the treatment of sandbagging. Where included, pro-sandbagging wording (allowing the purchaser to retain the right to indemnification regardless of its knowledge) was more common than anti-sandbagging wording.7 Similarly in the United States, the latest ABA study reports that although the majority of deals are silent on the issue of sandbagging, where addressed pro-sandbagging provisions are far more common than anti-sandbagging provisions.8

Our 2017 transaction sample also showed that materiality scrapes (provisions that read out materiality qualifiers in the representations and warranties for the purposes of the indemnity) were used in approximately half of the deals. While materiality scrapes are becoming fairly common in Canada, they are far more common in the United States. The latest American Bar Association study finds that these types of terms were used in approximately 90% of transactions surveyed.

Last year cash-only transactions remained the most popular consideration structure as strategic acquirors continued to put corporate funds to work and financial investors invested capital. However, we also saw an increase in the number of transactions where the buyer issued shares and/or debt as purchase consideration.

Working capital adjustments continue to be the most common purchase price adjustment post-closing, although adjustments based on net debt and unpaid expenses were also frequently negotiated (see Post-Closing Purchase Price Adjustments and Earn-Outs). Lock-box mechanisms (which do not provide for any post-closing adjustment to the purchase price and effectively “lock in” the equity value at signing, and which are very common in U.K.-style deals) are still relatively uncommon in North America.

Our 2017 deal sample reflected a significant rise in purchase agreements with earn-out provisions. In the current sellers’ market, an earn-out may work as a useful mechanism for buyers and sellers to bridge gaps in valuation. If the business performs as promised and achieves certain financial or other performance milestones over a period of time following closing, the seller is entitled to receive additional purchase price payments. 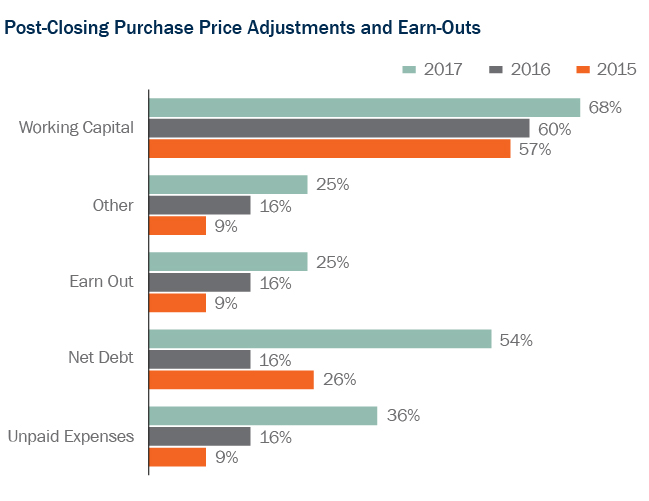 Our findings show the ongoing influence of wider market conditions on private M&A deal terms. We expect that the growing popularity of R&W insurance, sustained cross-border dealmaking and favourable conditions for sellers will continue to shape Canada’s M&A market as we move through 2018.

7 See our Transaction Tip, “Catching the Sandbagger off the Green: Sandbagging in M&A,” for a detailed discussion of this topic.

Read More From This Issue
Q2 | Spring 2018: The Future of Business in Canada
Trade uncertainty, federal-provincial clashes and the #MeToo era of governance are just some of the influences steering the path forward for Canadian business.
Table of Contents
Related Experience