The Canadian public M&A market was active in 2017, with the number of acquisitions of domestic public company targets rising sharply by 45% year-over-year, surpassing volume levels on record since 2011. 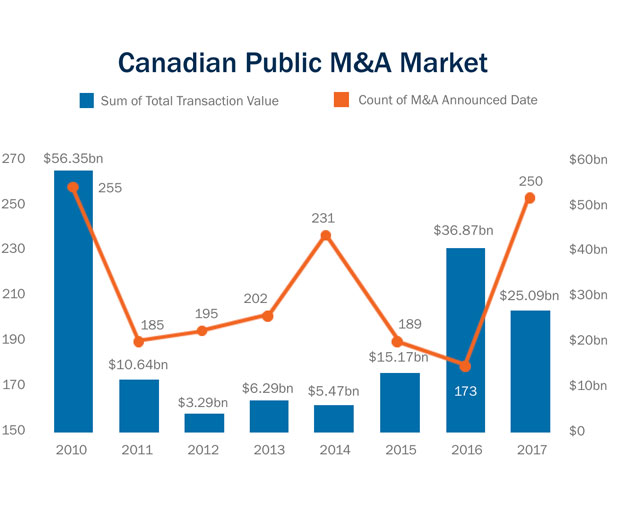 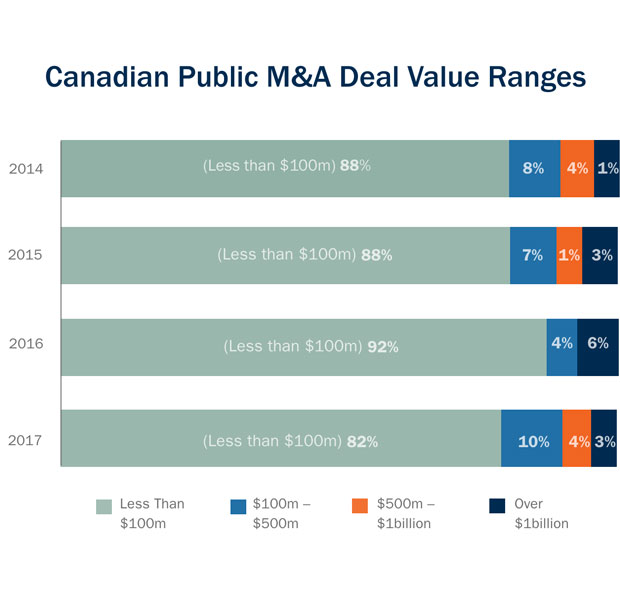 Strategic buyers were largely responsible for the buoyant dealmaking in 2017, making up the vast majority of the investor pool in the domestic public M&A market. Approximately 60% of public acquisitions were funded in cash, as strategic acquirors put corporate funds to work. Fewer financial buyers acquired public company targets last year, and volume levels fell to their lowest on record since 2011 (see “Strategic vs. Financial Buyers in Public M&A Market,” below).

In fact, private equity investors have continued to take advantage of strong market conditions to liquidate their investments, acting predominately on the sell-side of Canadian M&A transactions. Fewer financial sponsors invested capital in 2017, facing persistent challenges in sourcing quality assets in a highly competitive environment. Despite this, the volume of sponsor-to-sponsor transactions rose to its highest level in the last three years (see “Role of Private Equity Investors,” below).

Increasingly, Canadian businesses are owned by sponsors who are operating like quasi-strategic investors, assisting their portfolio companies (i.e., their platform investments) in becoming strategic acquirors in order to take advantage of synergies through dealmaking. We expect this trend to continue, with more sponsor-to-sponsor transactions to follow in the coming months. 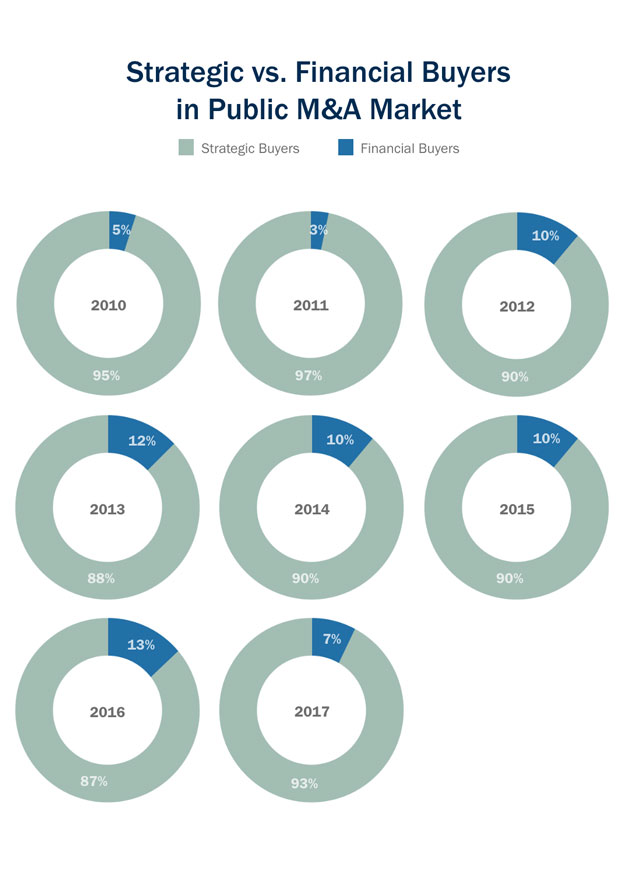 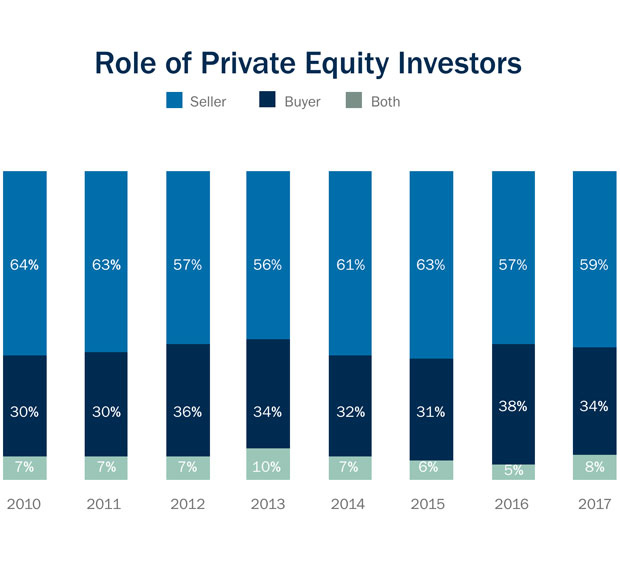 Overall, domestic M&A transactions involving a financial buyer or financial seller slowed down in 2017, and aggregate deal values in the private equity industry also decreased (see below), in line with the trend observed in the Canadian public M&A market.

The decline in capital invested in both the public and private equity markets is in stark contrast to the amounts of capital that financial investors have available for investment, reportedly at US$954 billion in September 2017 (with some other estimates well over US$1 trillion).2 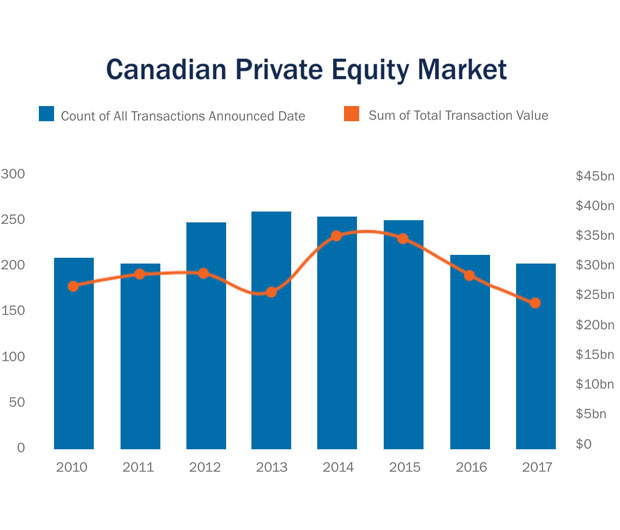 The mid-market segment continues to remain the focal point for Canadian dealmaking. Over the last several years, transactions valued under $500 million have made up over 90% of domestic public company acquisitions (see “Canadian Public M&A Deal Value Ranges,” above), and M&A transactions involving a financial buyer or seller have followed a similar trend (see “Canadian Private Equity Deal Value Ranges,” below).

Mid-market deals were notably prominent in 2017. On average, a Canadian public M&A transaction was valued at $218 million, representing a marked decline from 2016 where transactions were commonly double in size (see “Average Public M&A and PE Deal Value,” below). Specifically in the private equity industry for domestic M&A transactions involving a financial buyer or seller, average deal sizes have also been getting smaller over the last few years, falling to $291 million in 2017.

Although the mid-market segment attracted the majority of investor interest, many of the record high investments in 2017 were large-scale transactions involving U.S. financial investors acquiring Canadian targets. An example of this was OMERS Private Equity and Berkshire Partners’ agreement to sell Husky IMS International Ltd. to funds managed and/or advised by Platinum Equity for US$3.85 billion. 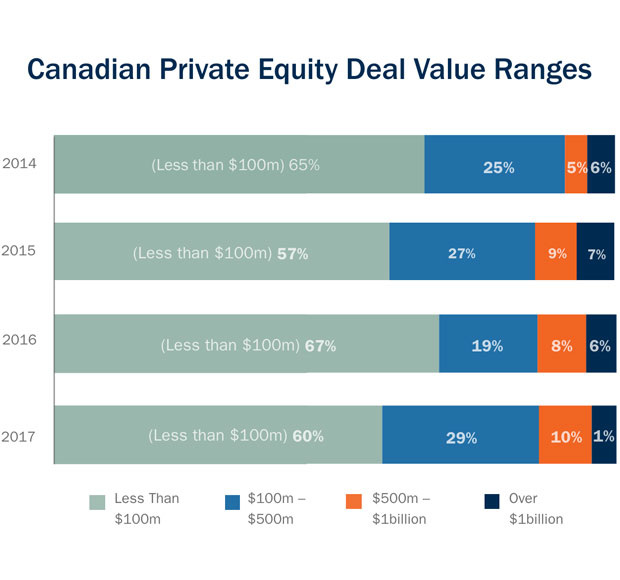 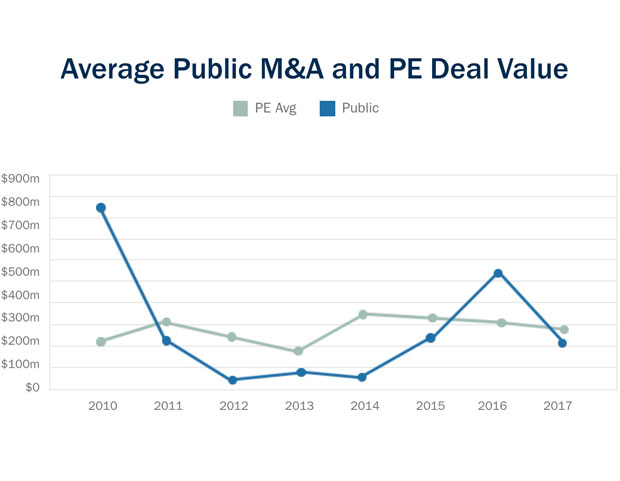 In 2017, Canadian public companies proved to be attractive targets for foreign buyers whose investments in the Canadian public M&A market increased by over 10% year over year (see graph below). Foreign financial buyers were especially active in Canada, with investments by foreign financial investors on the climb since 2015 (see “Foreign Buyers of Canadian Company Targets,” below). We expect foreign buyers will continue to be well-positioned to pursue growth opportunities in Canada as the current Liberal government has signaled that Canada is open to global investment.3

Meanwhile, the volume of outbound M&A transactions by Canadian investors—predominantly the Canadian pension funds and other institutional investors—continues to climb, topping volume levels observed since 2010. However, aggregate capital invested overseas has nearly halved since the peak in 2015, but remains well above total investment amounts reported before that time (see below). The Canadian pension funds continue to pursue international co-investment opportunities, forming alliances with local sponsors to penetrate new markets. 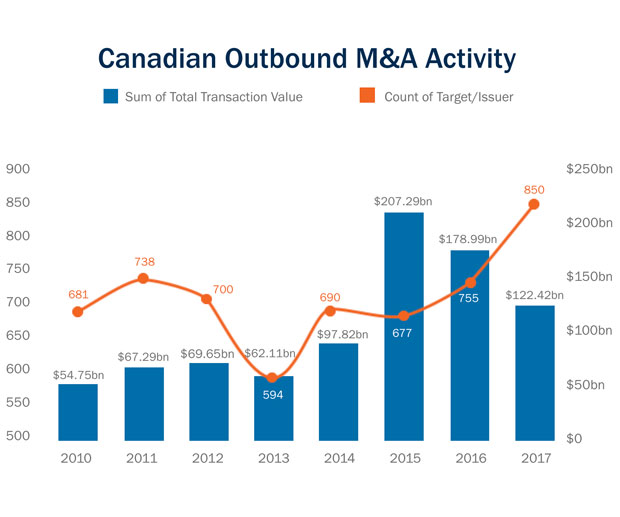 Declining investments both domestically and internationally are a reflection of investors’ growing prudence in the current environment. High valuation multiples, a scarcity of quality assets and overcrowded markets are causing investors to take their time to invest capital in new deals. More diligence is being done before engaging in a deal process, with more time being spent on valuating and testing key deal drivers.

The high level of competition is causing some investors to change the nature of the risks they are willing to take.

Smart investors are nonetheless finding good-value investments, although these may be harder to source than in the past and transactions may be more complex. The high level of competition is causing some investors to change the nature of the risks they are willing to take in order to achieve targeted returns, such as by acquiring companies with increased operational risks. This new approach is requiring financial investors to enhance internal expertise and seek outside sector specialists in certain industries.

Investors are also searching for opportunistic investments in disrupted sectors. Overall, given the efforts of sponsors, some transactions are being preempted, with quality assets being sold ahead of any auction process being commenced.

The technology sector experienced strong growth in 2017, with private equity investments in the sector surging by over 10% year over year (see below). In the public M&A space, we saw an uptick in deal activity in the financial services, manufacturing and industrials sectors, but oil and gas and mining public M&A activity remained relatively static. 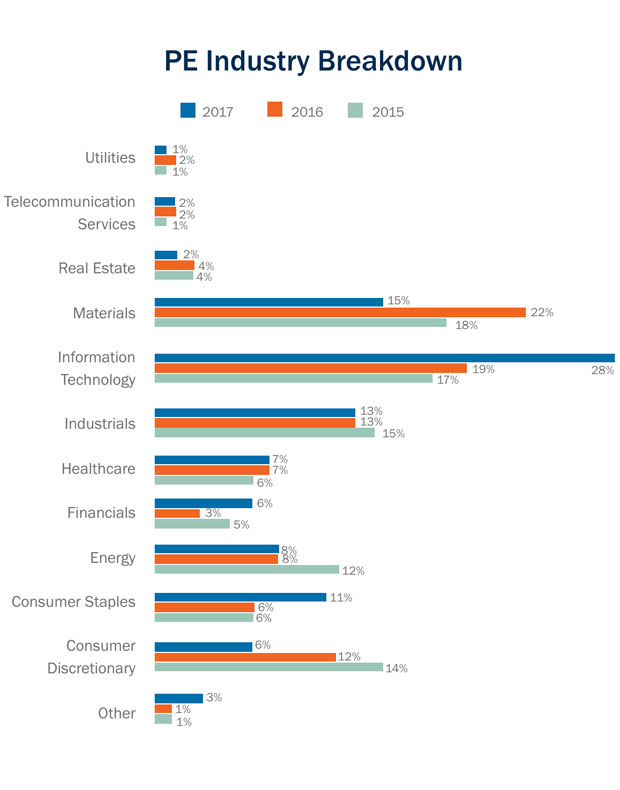 While Canada’s strong economic growth is predicted to ease in the coming months, the economic outlook for Canada in 2018 is still anticipated to be solid.4 5 Accordingly, we expect dealmaking will remain robust in the Canadian domestic market, especially as the mid-market core of Canadian M&A activity is unlikely to be severely impacted by broader macroeconomic influences in the global markets. In particular, more private businesses are expected to come to market as baby boomers retire. This is likely to keep stoking investor interest in the mid-size market segment. Growing corporate liquidity and favourable lending markets should also continue to support corporate buyers in their pursuit of domestic strategic investments. Cross-border transactions too will persist as businesses and investors continue to look outside of Canada for growth opportunities. While investors remain cautious and are taking their time to source opportune transactions, deals will continue to get done in the coming months.

1 Data sourced from S&P Capital IQ. 2017 data to December 1, 2017. Year allocations are determined by announced date. All data exclude investments in new issues and include both acquisitions of, and exits from, Canadian targets by financial investors.