Women in the C-Suite: Can Securities Law Advance Gender Equality?

Securities regulators around the globe have been focused on the underrepresentation of women in the C-Suite. Most notably, the United States, United Kingdom and Australia require disclosure of diversity practices and board nomination and selection procedures. At the direction of the Ontario provincial government, the Ontario Securities Commission (OSC) launched a public consultation process in 2013 to explore a model of disclosure intended to advance gender diversity on boards and in senior management.

In December 2014, the OSC (along with every other Canadian jurisdiction, except Alberta, British Columbia and the Yukon) introduced new disclosure requirements relating to women on boards and in executive officer positions.

(For a detailed discussion of the new disclosure rules, see our bulletin here).

Overview of Our Survey

To spotlight the impact of the new rules and emerging disclosure trends, we reviewed the proxy circulars of all reporting issuers in the S&P/TSX Composite Index subject to the new rules whose circulars were filed by May 10, 2015. These 179 reporting issuers make up approximately 71% of the Index and have an average market capitalization of approximately C$8.3 billion.

Most of Canada’s largest financial institutions were excluded from our survey group because, due to their fiscal years, they will not be subject to the new disclosure rules until next year. These institutions have historically been early adopters of corporate governance best practices, and often lead the way in the development of market standards for good governance. To compare their practices with the issuers in our survey group, we also reviewed the proxy circulars of nine of Canada’s largest financial institutions.

56% of the 179 issuers in our survey group have adopted formal policies addressing the representation of women on the board. This is a good example of disclosure rules driving corporate behaviour, as the vast majority of issuers who have policies appear to have adopted them between the 2014 and 2015 meeting seasons. While the rules only require disclosure regarding board policies, some issuers have gone further and adopted a policy that also addresses women’s representation in senior management (either as part of the board policy, or as a standalone policy). 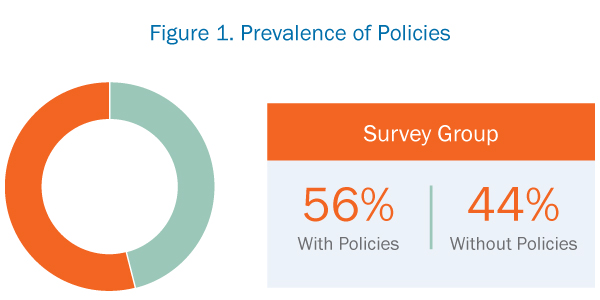 We found that issuers with policies tended to have larger market capitalizations and, perhaps not surprisingly, more women on their boards. Consistent with this, 7 of 9, or 77% of the Canadian financial institutions we looked at have board diversity policies in place and their boards are comprised of 34% women on average, compared to 16.4% women on average among all issuers in our survey group. 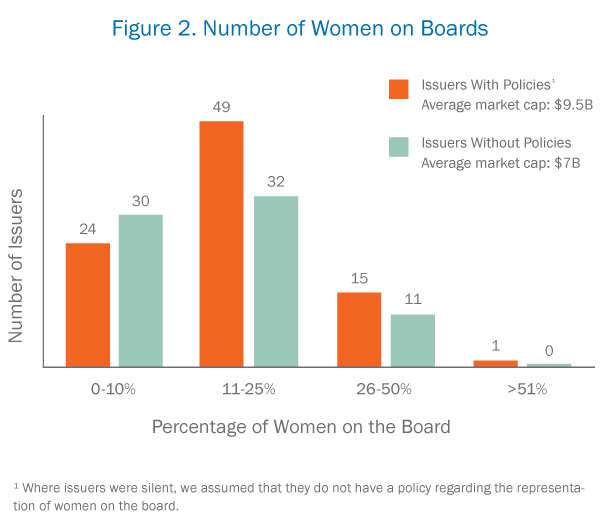 Scope of Policies and Targets

Jim Leech, former President and CEO of Ontario Teachers’ Pension Plan, remarked in a roundtable discussion during the consultation process that “diversity is experience, is nationality, is ethnicity and gender— but gender just jumps off the page at you. Fifty percent of the population and fifty percent of the board... it just jumps off the page, and I guess we’re going to eat this elephant one bite at a time.”2 The new rules align with this sentiment by focusing exclusively on policies regarding the representation of women (and not other groups) on boards and in senior management.

Despite the rules being focused on the representation of women, within our survey group a substantial number of issuers opted to adopt broader diversity policies. 60% of the policies we reviewed referred to the importance of diversity more generally, including, among other factors, diversity of race, nationality, ethnicity, religion, aboriginal identity, age, disability, sexual orientation and, of course, gender. We expect this is reflective, in part, of the broader scope of many issuers’ existing nondiscrimination and employment equity policies, which may have served as a point of reference for their policy regarding the representation of women.

Only a small subset of issuers in our survey—24, or 13%—have taken the step of adopting objective, measurable targets. Moreover, with a single exception, all quantifiable targets that issuers have set related solely to the representation of women (and not other under-represented groups) on the board. Interestingly, four issuers applied the targets only to the independent directors—this approach may appeal to issuers with controlling shareholders or other groups with board nomination rights who do not want to be constrained by the consideration of diversity when selecting their board nominees. We also found that most issuers who have committed themselves to targets have already met those targets—signaling perhaps a reluctance to adopt targets that may not be achievable, especially in light of the obligation to measure progress against targets in future disclosures. 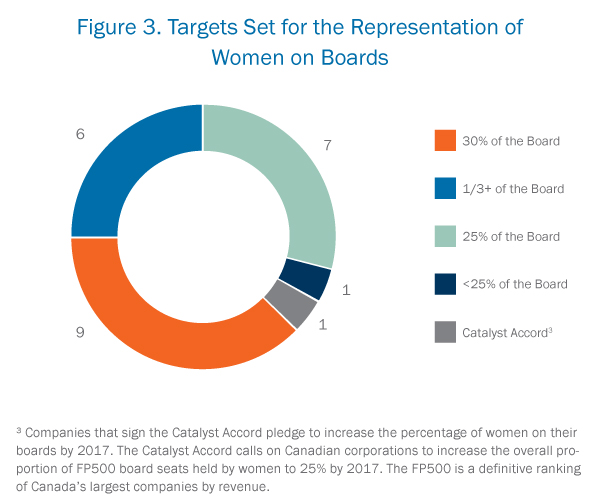 A commitment to selecting candidates based on merit was by far the most common reason issuers gave for not having a policy about the representation of women on the board, not considering gender in the board nomination process and/or not adopting a target for female board representation. 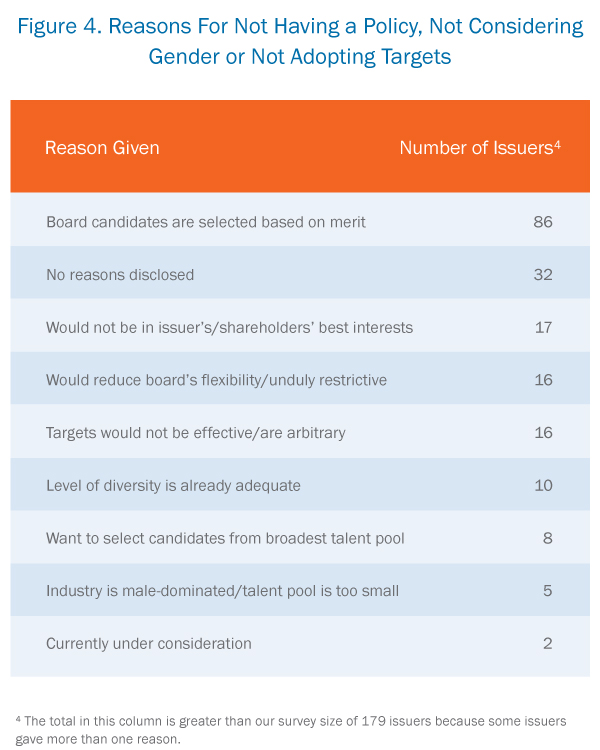 Some issuers may have tailored their disclosure to demonstrate that, while the representation of women in executive officer positions may currently be low, a robust pipeline of women with opportunities for internal promotion at different levels of management exists. We also suspect that some issuers provided disclosure of the segment of their workforce with the most balanced gender make-up.

Only a very small group (five companies) have adopted numerical targets for women in any of the executive or management categories mentioned above. The reasons given for not adopting targets mirror the reasons given in the board context—primarily the desire to focus on qualifications, skills and other merit-based characteristics.

The new disclosure requirements—and issuers’ initial responses this year—bring to the forefront a number of considerations for Canadian reporting issuers.

This year, many issuers responded to the new disclosure rules by adopting a policy regarding the representation of women on the board. The next challenge will be to effectively implement these policies in a meaningful way. Although most policies do not set fixed objectives, the new disclosure requirements have been effective at kick-starting the dialogue about women in the C-Suite among boards, governance and nominating committees and other market participants.

The new rules were designed to address the discrete issue of underrepresentation of women in board and executive officer positions. The importance of diversity and inclusiveness more generally is reflected in many issuers’ policies which, laudably, are not limited to gender diversity, and this could ultimately lead to progress for other underrepresented groups. However, as noted earlier, “gender jumps off the page,” and we believe that securities regulators chose to focus on gender as an important first step.

Many issuers expressed a resistance to targets on principle. Particularly in the executive officer context, where the talent pool or succession pipeline may be predominantly male or where recruiting externally is antithetical to the corporate culture, we believe that the adoption of targets will continue to be rare.

Where targets are adopted, they may inadvertently serve as a cap for female representation in board and executive officer positions. It would be unfortunate if adopting targets worked to undermine an issuer’s ability to achieve a longer-term objective of gender parity.

While eschewing targets, some issuers may look for other ways to increase the representation of women, and advance diversity more broadly, among their senior management team. Issuers may focus on systemic ways of building the pipeline of potential future women executive officers, for example, by making changes to their recruiting strategies, granting scholarships, and enhancing their internal retention and mentoring programs.

1 Where issuers were silent, we assumed that they do not have a policy regarding the representation of women on the board.

2 Transcript of the roundtable discussion of OSC Staff Consultation Paper 58-401 Disclosure Requirements Regarding Women on Boards and in Senior Management on October 16, 2013. Available at: http://www.osc.gov.on.ca/documents/en/Securities-Category5/oth_20131016_58- 401_transcript.pdf

4 The total in this column is greater than our survey size of 179 issuers because some issuers gave more than one reason.