The average indemnity cap for non-fundamental representations increased to nearly 45% of the deal value in 2014, from less than 40% in 2013 (see Figure A). This increase may in part be a function of our deal sample, which included a larger number of transactions in the mid-market range than in prior years (higher caps being more frequent in deals with a smaller transaction value).

As was the case in 2013, sellers continue to be successful in negotiating for the use of true deductibles (where the buyer bears the amount of losses up to the deductible) rather than thresholds/tipping baskets (where the buyer can claim from dollar one, once the threshold is exceeded). Deductibles were agreed to on 53% of our canvassed deals and thresholds/tipping baskets appeared in 40% of the sample transactions.

The average deductible/threshold amount in our deal sample for 2014 was 0.9% of transaction value (see Graph 3.1). The slight increase in the average from 2013 may be explained by the emerging use of “materiality scrapes” (see below), which, in our experience, sellers sometimes accept in exchange for a somewhat higher deductible. 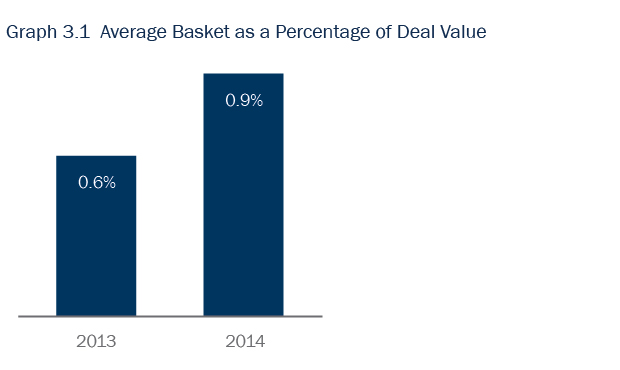 Although survival periods varied from deal to deal, the survival period for non-fundamental representations and warranties most frequently seen in our 2014 deal sample was 18 months.

One consequence of the competitive dealmaking environment of 2014 was that more buyers agreed to forgo post-closing escrows to backstop potential post-closing claims. This is indicative of a wider trend to execute private M&A transactions “public-company style,” particularly in the context of hot auctions. We also believe that the rising popularity of representations and warranties insurance, which we reference in detail later, as an alternative to seller escrows contributed to this development.

Our 2014 data show a veritable explosion in the use of representations and warranties insurance (R&W insurance), although use of the product was more frequent on U.S. deals than Canadian ones. Our data lines up with what other industry participants observe: one global insurance broker reports that insurance limits placed and associated transactions closed in the North American market essentially doubled in 2014 from 2013 and have increased by over 300% from 2011.

What makes R&W insurance so attractive? Consider a traditional PE deal in the mid-market with a transaction value of $100 million: the recourse package for the deal might include an indemnity for breaches of non-fundamental representations with a cap in the range discussed above and a seller escrow (accruing nominal interest) in which 5% to 10% of deal proceeds are held back for at least one audit cycle. The former puts at risk a sizeable portion of the sellers' return; the latter is a meaningful drag on the sellers’ IRR. A R&W insurance policy, by contrast, permits an almost entirely “clean exit” from the sellers’ perspective for a moderate premium.

Pricing for policies varies, but as of late has trended within a band of 3.0% to 4% of the insurance limit for a “middle-of-the-road” set of representations and warranties, meaning that a $10 million policy can be purchased for approximately $300,000-$400,000, plus a small underwriting fee in the range of $30,000. The costs can be allocated among the seller and buyer as desired.

Most of the insurers have groups of former M&A attorneys who assist with putting a policy in place. That greatly facilitates the overall resolution of issues and the process, which typically consumes two to three weeks from start to finish. Does R&W insurance pay, if indemnity claims are asserted? While the product has not been around long enough to definitively answer this question, anecdotally, insurers have honoured claims and have done so swiftly. The conventional wisdom is that it may well be easier to collect from an insurer trying to establish a reputation in this increasingly popular and competitive niche of the insurance market than from a seller who will almost always be incentivized to fight tooth and nail in connection with a rep and warranty claim.

What’s in the Fine Print?

The rising popularity of R&W insurance and the above changes in indemnity terms are reflective of the recent sellers’ market that we expect to continue in the year ahead. It will be interesting to see how deals terms will evolve as Canada’s highly adaptive private equity market hits its stride in 2015.