Much of the newsmaking developments of 2019—geopolitical conflict, trade wars, and plenty of speculation around a looming global recession, to name just a few—shared a common theme of volatility.

Watch the heads of our M&A practice Karrin Powys-Lybbe and John Emanoilidis discuss dealmaking in 2019 and what lies ahead for 2020.

Despite this, Canadian M&A in 2019 experienced good growth across the board, thanks in part to mega-deals, foreign investment into Canada, as well as an active private equity sector. These trends, macroeconomic conditions pointing to growth in certain sectors, buoyant equity markets and low interest rates are all anticipated to contribute to an active dealmaking environment for 2020.

M&A on the rise

Public M&A in Canada had an active 2019: deal volume for acquisitions of Canadian public targets is back on the rise after a three-year decline, and total deal value is almost double what it was in 2018 (figure 1). Key mega-deals can take much of the credit for the ballooning in value, with a 6% increase in the volume of transactions over $1 billion from 2018 (figure 2). 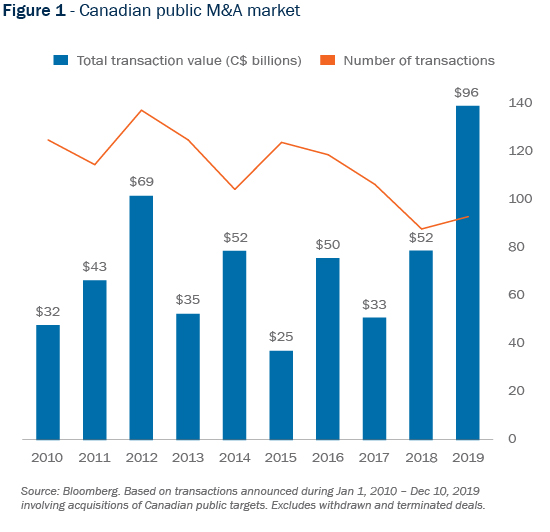 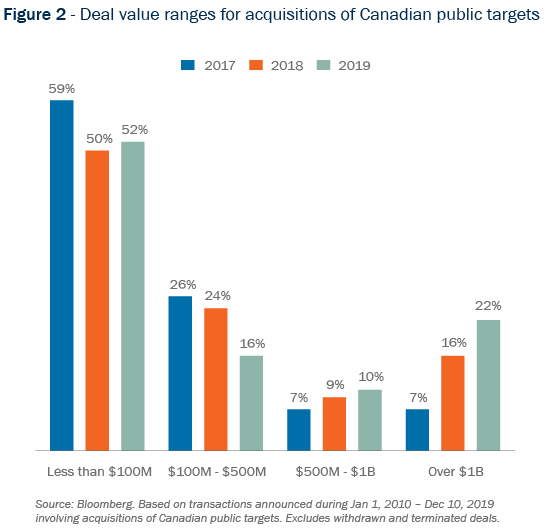 A trend toward high-value transactions was also seen in the private equity space in 2019. The average size of a transaction involving a private equity buyer increased to $605 million, which is over double the average from last year (figure 3). To some degree, the growth in deal sizes is being driven by Canadian and US mid-market private equity funds which have been able to raise larger funds and attract more significant co-investment interest, and are therefore able to deploy more capital towards larger deals. Equally important mega-investments made by the larger private equity buyers in the Canadian public markets also influenced the average transaction value. These included Onex’s $6.56 billion acquisition of WestJet Airlines and Blackstone’s $5.9 billion acquisition of Dream Global Real Estate Investment Group. 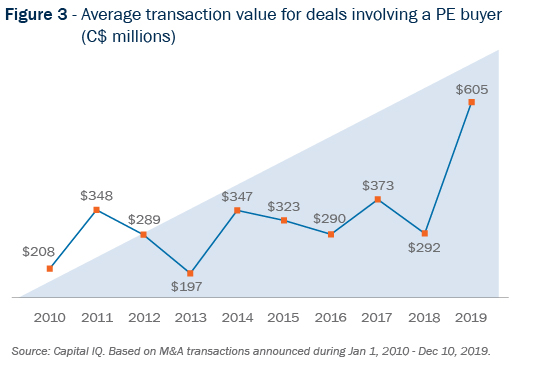 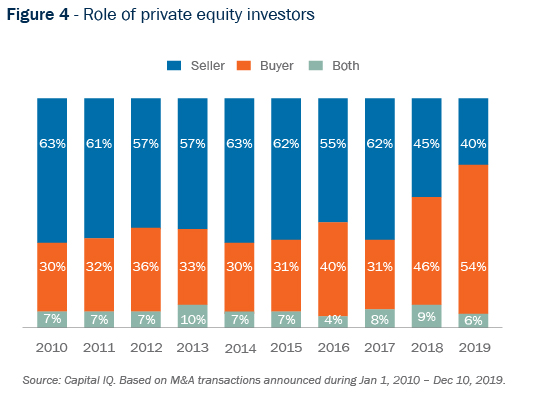 It was a busy year for inbound investment into Canada in 2019 (figure 5), with the U.S.-China trade war, as well as Canada’s strained relationship with China not having a dampening effect on trade or the economy. In particular, a spike in M&A deal activity from the United States (figure 6) resulted in a very substantial increase in overall inbound deal value, again in part due to large transactions including the Newmont-Goldcorp deal. 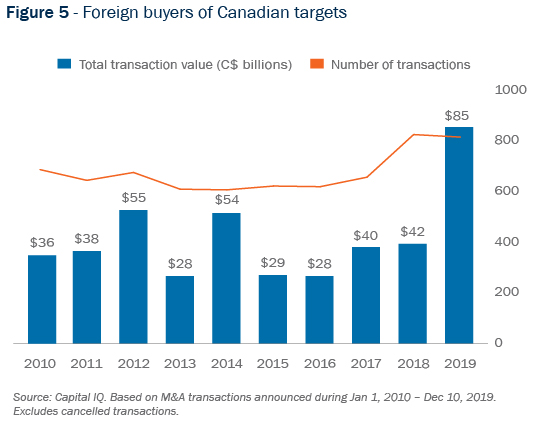 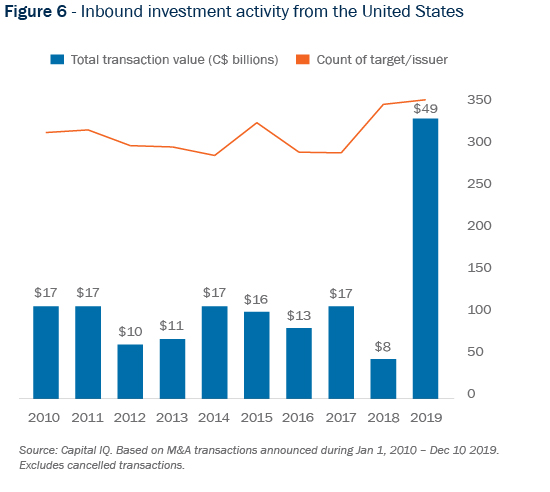 The Canadian government is continuing to scrutinize investments from China—and to a lesser extent from other countries—for potential national security concerns. High risk business sectors are critical infrastructure, AI and telecommunications, but reviews have occurred in a diverse range of industries, including urban transit systems and equipment and machinery manufacturing. Typical outcomes have been blocks, divestiture orders or (based on negative feedback received by foreign buyers) withdrawn applications. Although conditional approvals are granted from time-to-time, they are rare and the government is generally skeptical about conditions that require on-going compliance on the part of the foreign investor and monitoring by the government.

The large increase in national security reviews is resulting in a shift in how some businesses have been approaching the process. Foreign investors are now increasingly notifying the government voluntarily in advance of transactions to minimize the risk of post-closing divestment orders. Target Canadian businesses, for their part, are increasingly approaching the government early for preliminary risk assessments. This approach has now been used on numerous occasions by Canadian businesses seeking an advance indication of whether potential investors may create national security concerns. Feedback from the government usually takes less than a month and has enabled Canadian businesses to shift focus away from potential buyers that could create regulatory risks or delay.

However, this increased scrutiny ought to be assessed in context: measured by the number of deals, investments from the US and EU accounted for well over two-thirds of Canada’s inbound investment according to government statistics, and less than 5% were from China. In other words, for the vast majority of foreign buyers, Canadian national security reviews are not an obstacle to investment opportunities. 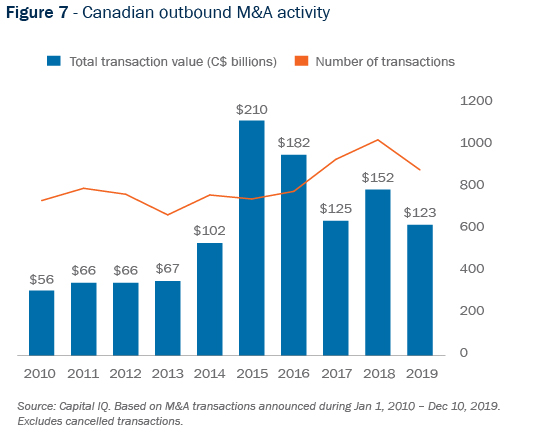 2019 saw a surge of outbound investment into the United Kingdom—a development that seems to defy many of the headlines of the past year which pointed to a chilling effect, stirred by Brexit-related uncertainty, around investment into the UK. However, with volume remaining relatively static from 2018 (figure 8), this spike is largely attributable to three key mega-deals: Blackstone’s purchase of Merlin Entertainment; the acquisition of British telecom company Immarsat by Apax, Warburg Pincus and CPPIB; and Saputo’s purchase of Dairy Crest. 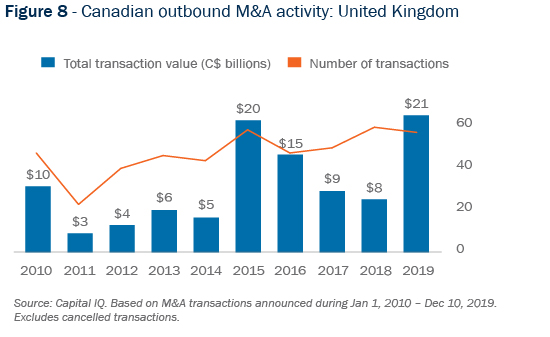 In 2019, Canadian sectors saw M&A numbers consistent with recent years (figure 8), with materials taking the lion’s share of deals. Notable departures from the steady mix of industry activity include an uptick in financial services M&A, and a drop in energy M&A (see “oil and gas update”, below). The financial services industry experienced an uptick in activity. Mega-deals (categorized in this industry group by Bloomberg), included Blackstone’s acquisition of Dream Global, and Brookfield’s acquisition of Genworth1, and point to institutional investors ongoing focus on investments with stable returns in sectors like real estate (learn more about this trend in our 2019 Q4 sector report “Key trends in Canadian real estate investment”). 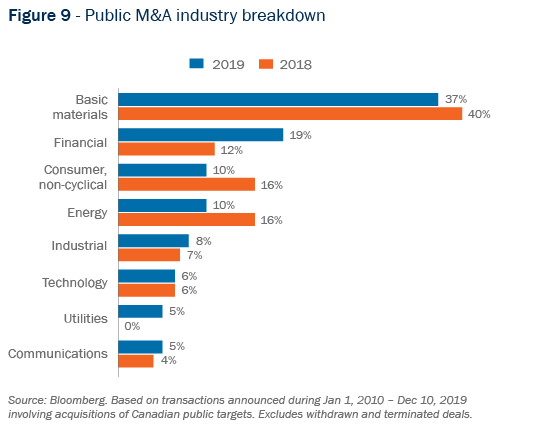 While PE deals waned in the financial and consumer sectors, IT and industrials continue to vie for being the top source of private equity M&A in the country, and both experienced marked increases in activity. Combined, they accounted for 42% of all PE activity last year. 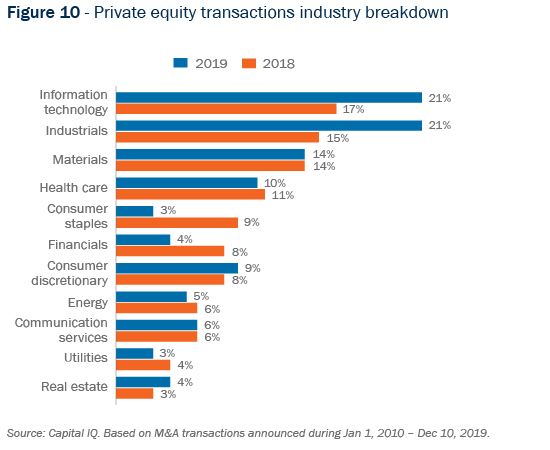 Canadian oil and gas is hoping 2020 will bring a breakthrough in good news as years of legal and political challenges, weak prices, ongoing export capacity issues and more have made times difficult for the sector. In particular, uncertainty around the progression of major pipeline projects (which you can read more about in our Q4 2019 oil and gas report here) remains a key barrier to reviving investor interest in the industry.

However, there are early tentative signs of hope. This month, the Supreme Court dismissed the BC government’s appeal as a lower court decision that quashed the provincial legislation that was intended to block the TMX pipeline expansion, and a decision from the Federal Court of Appeal on the government’s consultation process for TMX is expected in the next couple of months. There has been promising news on the development of TC Energy’s Keystone XL project, TMX and Enbridge’s line 3 replacement project from the project proponents who continue to demonstrate their commitment to push the projects forward. The $40 billion LNG Canada project is now over one year into construction, with hopes of opening by 2025. In the near term there continues to be significant M&A activity in the midstream space and certain TSX oil and gas stocks showed a rebound in the fourth quarter 2. It remains to be seen whether broader macroeconomic conditions such as instability in the Middle East and speculation of a slowdown in U.S. shale oil production, coupled with crucial movement forward with pipeline projects will contribute in 2020 to provide the shot in the arm the sector needs to rebound.

Large transactions and busy investors meaningfully moved the dial in Canada’s M&A landscape last year in spite of volatile head winds from the international stage. We expect strong M&A activity in 2020, but potential head winds exist. It remains to be seen how pressing macroeconomic issues which remain important to the Canadian business landscape—from business confidence amid the potential for an economic slowdown to our relationship with China to the fate of domestic pipeline projects—will shape M&A in Canada in the year ahead.

1 Torys advised Brookfield on this transaction.