The result has been a convergence of trends that should see increased activity in the sector and a number of key questions to be answered over the balance of 2016, including whether the rebound in the gold sector will be sustained and lead to capital markets and M&A activity opening up for other commodities.

An Equity Financing Window for Some Market Players

The first half of 2016 has seen a number of companies in the gold sector raise equity in the Canadian capital markets (see Figure 1). The most significant equity financings have been completed by precious metals royalty and streaming companies. So far in 2016, Franco-Nevada, Silver Wheaton and Osisko Gold Royalties have raised over US$1.6 billion of equity capital. These financings include Franco-Nevada’s US$920 million cross-border bought deal financing completed in February, a portion of which was used to fund the acquisition of a US$500 million gold and silver stream in relation to Glencore’s Antapaccay mine in Peru, with the balance for general corporate purposes.

And it is not only the royalty and streamers who have benefited—both Kinross, a large established gold producer, and development gold companies such as Pretium Resources, Lydian Resources and Red Eagle Mining have also accessed the capital markets in 2016. For the right precious metals companies and projects, traditional equity financings may now be a more viable option as investors cautiously return.

It remains to be seen whether the rebound in commodity prices will be sustained. A number of external factors, such as easing of concerns over Chinese growth and a dovish U.S. federal reserve helped halt the fall in commodity prices, but among commentators there is disagreement about whether this rebound in prices will keep momentum and whether a new normal has been reached. As a result, many of the themes we saw in 2015 continue to dominate. Many of the major and mid-size producers continue to pursue asset sales to address balance sheet concerns and rationalize portfolios. For example, Anglo-American has announced a target of US$3-4 billion in assets sales in 2016. In addition, Freeport-McMoran has continued with its asset sale program, having recently agreed to sell its interest in the Tenke copper project in the DRC and a significant interest in its Morenci copper mine in Arizona. Longer-term success of asset sales programs will depend on sufficient buying capacity from acquirors able to make strategic acquisitions and the availability of funds supplied by streamers and private equity investors. Equity capital markets financings may also soon become a source of funds for strategic acquirors and an option for the sellers once they have reduced debt and rationalized their portfolios.

For the right precious metals companies and projects, traditional equity financings may now be a more viable option as investors cautiously return. 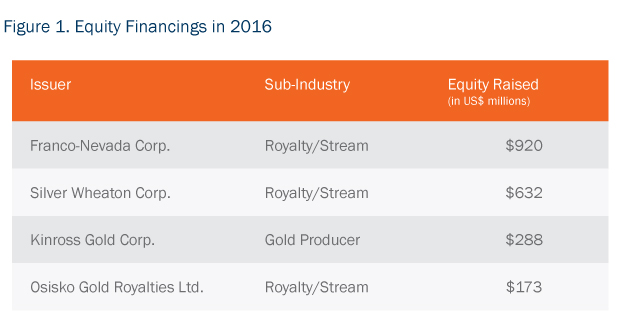 2016 has already seen a number of gold sector companies make strategic acquisitions. In May, Goldcorp Inc. agreed to buy Canadian explorer Kaminak Gold Corp. in a C$520-million share acquisition and earlier this year, Tahoe Resources acquired Lake Shore Gold Corp. for C$550 million. Stability in commodity prices and an opening of the capital markets would make it easier for other acquirors to make acquisitions. A key question for the balance of 2016 will be whether and how this will play out.

Another “Year of the Stream”?

Streaming transactions have played a major role in the asset sale trend as streamers have had the opportunity to acquire precious metal streams on tier-one producing assets from global miners. The increased use of stream financing has spurred an ties and transactions. For example, one of the key requirements of stream financings undertaken by the global miners to facilitate debt reduction is to ensure that the streams are not treated as debt by rating agencies. Certain features of the traditional structure of streaming transactions have seen adjustments made for this purpose—including forgoing the security interests traditionally granted over the assets and project ownership interests by the mining company. 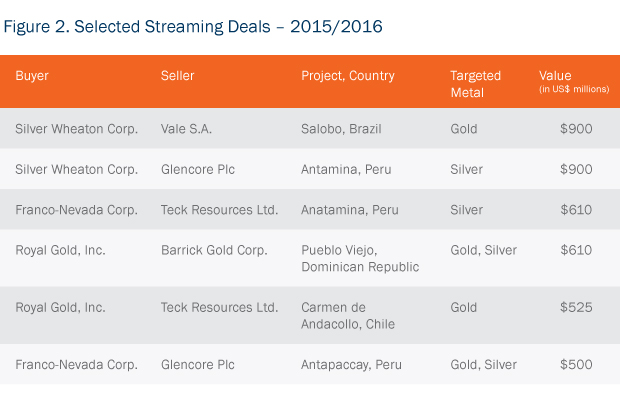 A key question at the outset of 2016 was whether streaming companies who had largely committed their available capital through 2015 could reload their war chests and bring in financing partners to continue the pace of deals. That question has been answered in the first quarter of 2016 as these companies were able to access the equity capital markets.

Accordingly, the rest of the year ahead should see continued royalty and streaming activity, both as part of the ongoing assets sales by the large and mid-tier miners and for financing new promising projects. As these transactions continue to be driven by the traditional streamers, we expect to see private equity and institutional investors continue to show interest in participating in the streaming model.