Canadian Oil and Gas: Midstream and Financing Activity on the Rise

Overall, activity in the Canadian oil and gas market has been significantly lower than normal over the past year, as equity markets in Canada remain subdued and investors continue to be cautious about investing in the sector.

Despite this, activity has increased of late, especially in the midstream sector, as primarily upstream oil and gas companies divest non-core midstream assets to bolster their financial position or “unlock value”—and an increasing number of sector-related issuers, mainly midstream companies, are turning to the capital markets for financing to fund new deals.

The recent uptick in oil and gas companies accessing the capital markets has been cause for some optimism in the sector. Companies who have recently accessed the capital markets found that investors were highly receptive to their offerings, with many deals being oversubscribed and the underwriters’ over-allotment options being fully exercised.

Midstream companies have taken to the capital markets this year to raise significant capital: in February, Enbridge Inc. raised C$2.3 billion from the issuance of common shares to fund its growth program over the next two years, and in April, both Pembina Pipeline Corporation (C$250 million) and TransCanada Corporation (C$500 million) announced offerings of preferred shares to fund capital expenditures, increase working capital and reduce debt. All of the offerings were fully subscribed, and Pembina’s and TransCanada’s offerings were so successful that both companies increased the sizes of their offerings.

In March, TransCanada Corporation announced that it would raise over C$4.2 billion in a bought deal financing of common shares as part of its major US$13 billion acquisition of Columbia Pipeline Group, Inc., a Houston-based company with a large interstate network of natural gas pipelines in the United States.

Companies who have recently accessed the capital markets found that investors were highly receptive to their offerings, with many deals being oversubscribed.

“Unlocking the Value” of Midstream Assets

Even as the oil and gas market has remained generally soft, the growing number of divestitures of midstream assets by integrated or primarily upstream oil and gas companies has dominated the market. Oil and gas companies searching for sources of capital to ride out low oil prices are monetizing their oftentimes significant midstream assets to focus on their core, upstream assets. We saw the emergence of this trend in the past couple of years. Encana Corporation concluded an agreement to sell natural gas pipeline and processing assets in the Montney area of British Columbia, owned by Encana and its partnership with a subsidiary of Mitsubishi Corporation, to Veresen Inc. and KKR & Co. LP for C$760 million in April 2015, in an effort to raise capital to fund the development of its large portfolio of upstream assets. Veresen and KKR’s resulting partnership, Veresen Midstream LP, additionally committed to invest C$5 billion in new infrastructure for the Montney area in the coming 30 years. 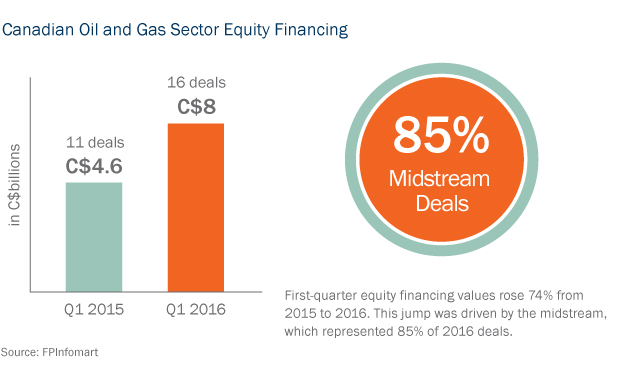 Starting in 2016, the appetite for midstream divestitures appears to have increased dramatically. In January, Enbridge Inc. announced a C$538 million deal to acquire gas plants and related pipelines in northeastern British Columbia from Murphy Oil Corporation, a U.S.-based upstream producer. In addition, after putting its midstream assets up for sale in January, Paramount Resources Ltd., a Calgary-based intermediate oil and gas company, announced in March that it had made a deal with Pembina Pipeline Corporation for C$556 million, which Paramount used to pay down debt. Notably, Pembina raised funds for the acquisition partially through a C$345 million bought deal financing of common shares, which is in addition to its previously mentioned offering of preferred shares.

Likewise, Husky Energy Inc. announced a deal on April 25 for the sale of 65% of its interest in certain midstream assets in Alberta and Saskatchewan to Cheung Kong Infrastructure and Power Assets Holdings Limited for C$1.7 billion. Husky intends to strengthen its balance sheet by using the proceeds to pay down debt. The assets will be held by a new limited partnership that will maintain integration with Husky’s upstream and refining assets, with Husky continuing to hold a 35% interest and act as operator.

The depressed oil and gas markets have not affected all companies equally: midstream companies looking to the capital markets to fund major deals in particular are finding investors highly receptive to new equity offerings. And some oil and gas exploration and production companies are finding they are not entirely locked out of the markets and have successfully raised funds this year in a series of offerings. We anticipate that distressed integrated and upstream oil and gas companies will continue to look at divesting non-core and midstream assets to improve their balance sheets, especially in the face of today’s low oil price environment and depressed equity prices.