Leveraged lending in the U.S. fell to a three-year low of 57% in the first quarter of 2015 compared to first quarter of 2014.1 After much speculation in the last two years, it appears that the U.S. interagency guidance on leveraged lending (the Guidance) issued in March 2013 by the Office of the Comptroller of the Currency (the OCC), the Board of Governors of the Federal Reserve System (the Federal Reserve) and the Federal Deposit Insurance Corporation (FDIC) is having a real effect on the U.S. debt markets.

When released, the Guidance was generally expected to have a moderate impact; today, the realized effects of the Guidance include a significant drop in overall volume of leveraged loans, and more specifically, a decrease in leverage ratios, most recently averaging 6.55 times in 2014 and reportedly down to 5.91 times in the first quarter of 2015. 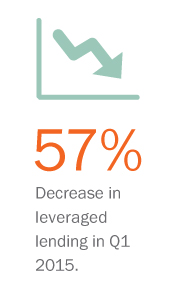 The Guidance applies only to leveraged loans and to those institutions regulated by the OCC, the Federal Reserve and the FDIC. Does this mean that there will be greater opportunity for non-bank institutions and sources of liquidity from outside of the U.S., including Canada? We believe the answer is a resounding yes.

What are the Types of Leveraged Loans That Pose Concern Under the Guidance?

In response to the financial crisis in 2007, U.S. regulators sought to address perceived deficiencies in underwriting standards and risk management by issuing the Guidance in conjunction with more frequent reviews of financial institutions. In their reviews, regulators examine internal standards and categorize lending portfolios. Financial institutions are expected to formulate their own definitions of what constitutes a leveraged loan, but four common transaction characteristics are identified in the Guidance:

A transaction need not meet all four characteristics to be deemed a leveraged loan subject to the Guidance. Underwritten commitments to extend a loan are also governed by the Guidance.

Regulators assign leveraged loans a risk rating of “pass,” “special mention,” “substandard” or “doubtful.” Although ambiguity still exists around the interpretation of the Guidance, certain transaction characteristics are viewed as earmarks of a loan that would be subject to criticism and include:

It is widely expected the unregulated funds and institutions will step in to fill the gap in leveraged lending created by the new standards, resulting in new market dynamics for lenders and borrowers alike.

Loans without financial maintenance covenants (or covenant-lite loans) are not automatically problematic. Regulators will look at the lender’s approach on due diligence, the sustainability of the borrower’s capital structure and its ability to repay the debt.

Of course, there are no bright lines or safe harbours in the Guidance, so market players have been forced to proceed cautiously, and financial institutions are walking away from the more highly leveraged transactions. The Guidance appears to be having its intended effect of limiting higher-risk lending and ensuring that lenders apply more stringent diligence standards.

Opportunity For Other Lenders

It is widely expected that unregulated funds and institutions will step in to fill the gap in leveraged lending created by the new standards, resulting in new market dynamics for lenders and borrowers alike. According to Thomson Reuters PLC, the combined market share of Jefferies, Macquarie and KKR in the 2014 institutional new money loan league tables increased by 20%. We expect that pension funds and other entities not regulated by the OCC, the Federal Reserve or the FDIC will find opportunity here as well. Considering the absence of withholding tax on most loans from Canadian lenders to U.S. borrowers and their familiarity with U.S. loan structures and documentation, Canadian investors would seem well suited to benefit from the U.S. regulatory environment. With Canadian banks obviously subject to their own regulatory constraints, the biggest opportunity may fall to Canadian institutional investors such as pension plans, life insurance companies and private equity funds.

Acquirors may also increasingly rely on issuances of high-yield bonds in the U.S. and Canadian capital markets to finance leveraged acquisitions. The main downside to buyers and sellers is that the high-yield bond market has historically been more volatile than the bank market so sellers (at least in auctions) have generally required back-stop bridge commitments to support bids. The bridge commitments have traditionally been provided by banks subject to the Guidance, so the Guidance will likely chill the bridge commitment market as well.

Both the regulations and the market’s reaction are very much in flux, but as the market shifts, we predict that new opportunities in the area of leveraged lending will emerge.

1 According to a report issued by Thomson Reuters.