Investing in the Future: PPPs and Infrastructure Assets

As global demand for improved infrastructure rises in tandem with institutional investors’ need to invest large capital pools in long-term assets, allocations of private capital to public infrastructure, as an investment asset class, are set to grow significantly. The PPP model is one innovative strategy that is increasingly being deployed by governments and investors around the world to inject private capital into the asset class.

Continuous investment in new and improved infrastructure is essential to ensure ongoing growth and prosperity around the world. In their 2013 report, Infrastructure productivity: How to save $1 trillion a year, the McKinsey Global Institute estimated that just to keep pace with projected global GD P growth, the world will require an additional $57 trillion in infrastructure investment by 2030, a 60% increase in the amount spent over the past two decades. Similarly, the World Economic Forum has reported that global spending on basic infrastructure (which includes transportation, water, power and communications infrastructure) currently amounts to $3 trillion instead of a recommended $4 trillion, creating a $1 trillion annual gap.

To address this burgeoning demand, governments struggling to balance their budgets must encourage private-capital investment in infrastructure. This shouldn’t be a tough sell for institutional investors like pension funds, sovereign-wealth funds, and insurance companies, whose investment needs align well with infrastructure assets, which offer long-term and stable cash flows to offset long-term liabilities. These assets also often have built-in inflation protection, and their relative illiquidity compared to other asset classes may not be as big of an issue for institutional investors as it would be for other categories of investors.

The OECD’s December 2014 Annual Survey of Large Pension Funds and Public Pension Reserve Funds reported that the most salient trend in the survey population (comprised of 104 large pension funds and public pension reserve funds managing a combined US$10.4 trillion in assets) was an increase in alternative investments, including infrastructure. While the survey results show a low level of actual investment in infrastructure on average, there is huge potential demand with many funds increasing their allocation to infrastructure or opening new allocations to the infrastructure asset class. According to the report, target allocations among the funds with dedicated infrastructure exposure ranged on the low end from 1% to over 20% of total assets.

The public-private partnership (PPP) procurement model is one way to use private capital to build public infrastructure. Although the PPP model means different things to different people, the Canadian Council for Public-Private Partnerships defines a PPP as “a cooperative venture between the public and private sectors, built on the expertise of each partner, that best meets clearly defined public needs through the appropriate allocation of resources, risks and rewards.” 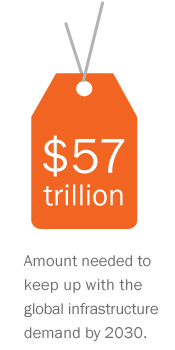 A typical PPP transaction involves the selection by a public-sector entity of a privatesector partner to design, build, finance, operate and maintain a piece of public infrastructure for a term that spans several decades (usually in the range of 25 to 50 years). The transaction may be structured on an availability basis, where the private partner is paid for ensuring that the infrastructure is available to the public in a specified condition, or may include some revenue risk to the private partner, as would be the case with a toll road or bridge. The vast majority of PPP transactions in Canada are availability payment deals, and the availability payment model is also gaining popularity in the U.S.

The financing of a PPP transaction is characterized by high leverage—90% debt and 10% equity would be typical for an availability payment deal without unusual risk allocation—and low debt service coverage ratios, robust security packages from subcontractors to cover performance risks and, ideally, a strong government counterparty with the power to appropriate the funds necessary to pay for the asset over time.

Many Canadian PPP transactions involve large milestone payments from the public-sector partner to the privatesector partner on completion of construction—allowing for innovative financing structures.

Although some PPP transactions involve the refurbishment or repurposing of established assets (e.g., the creation of high-occupancy toll lanes on existing roadways), most are best described as “greenfield” in that they involve the creation of new assets needed to replace aging infrastructure or accommodate increased demands resulting from population growth or demographic shifts. In this way, PPP transactions create new assets to be bought and sold by investors in the future.

In Canada, many PPP transactions involve relatively large milestone payments from the public-sector partner to the private-sector partner on the substantial completion of construction. This allows for the use of innovative financing structures involving a combination of short-term bank and/or bond financing to cover the construction period, and long-term bond or private placement financing to cover the remainder of the operational term. In contrast, in the U.S., government support often takes the form of tax-advantaged debt financing products rather than milestone and completion payments.

Institutional Investors are Embracing PPPs in the Canadian Market

Most of the large Canadian life insurance companies, including Manulife, Canada Life and Sun Life, are active as debt investors in the PPP space. The Canadian pension funds also participate, primarily as equity investors; for example, Borealis Infrastructure, the direct infrastructure investment arm of OMERS (one of Canada’s largest pension funds with approximately C$72 billion in net assets) has invested equity in several PPP transactions in Ontario.

It was also recently announced that La Caisse de dépôt et placement du Québec (La Caisse), which manages public pension plans in the province of Québec and has almost C$226 billion in net assets, will be given new powers to control and develop major infrastructure in the province. The Government of Québec will identify and approve potential projects and La Caisse will undertake the planning, financing and execution of the project on the government’s behalf. At present, it appears that their approach will share some features with the PPP model, including a focus on the overall costs of a project over its entire lifecycle. Assuming that planned legislative amendments are passed later this year, La Caisse plans to establish a new subsidiary, CDPQ Infra, to execute the projects. The first two projects that have been identified, a public transit system on Montréal’s new Champlain Bridge (which is currently being procured as a PPP project by the Canadian government) and a public transit system linking downtown Montréal to the Montréal-Trudeau International Airport, are expected to require a combined investment of approximately C$5 billion.

Whether through the PPP procurement model or other innovative strategies, governments at all levels and in jurisdictions around the world have come to recognize that they must encourage more private capital to participate in the development of our public infrastructure. At the same time, more and more institutional investors are looking for opportunities to put their capital to work in alternative assets classes. It seems inevitable that these complementary trends will converge sooner rather than later.