Tapping opportunity in the debt markets

With markets benefiting from incentives from government assistance programs and a low interest rate environment, businesses looking to shore up their liquidity, address near-term maturities or finance transactions may find post-crisis opportunity through the debt capital markets on both sides of the Canada-U.S. border.

After a brief shutdown of the debt capital markets earlier in 2020, toward the end of March and into the second quarter, we saw a wave of issuances of corporate debt in the United States and Canada.

According to Bloomberg, US$1.7T of corporate bonds were issued in the United States in the first half of the year, already close to surpassing the 2019 year total (US$1.9T). The volume of U.S. investment-grade corporate bond issuances steadily increased since March, reaching a peak of US$382 billion in May (Figure 1). U.S. bond activity included many issuances by non-investment-grade issuers of high-yield notes that commenced in April, which continued to rise until the end of June (Figure 2). 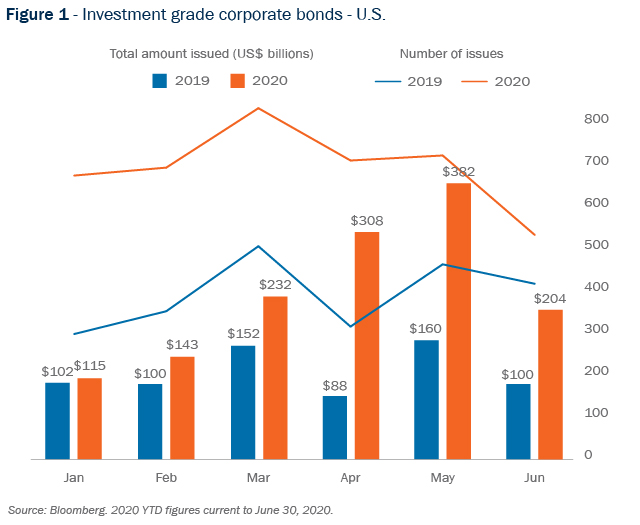 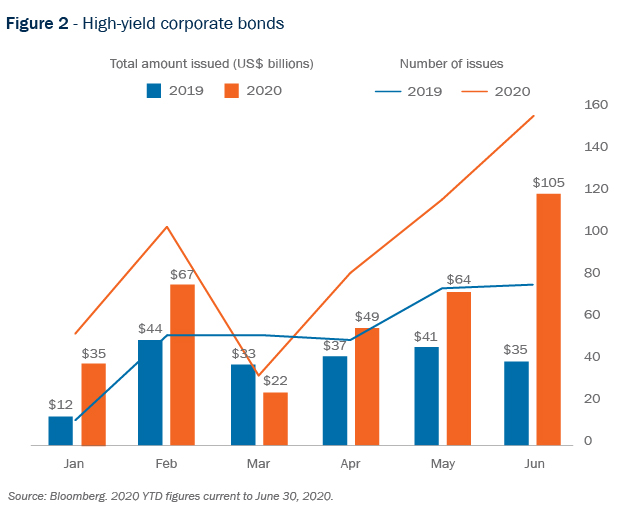 In Canada, the bond markets have equally been active, with the aggregate amount and volume of issuances year to date surpassing levels from the same period last year—including a notable spike in issuances last month (Figure 3). 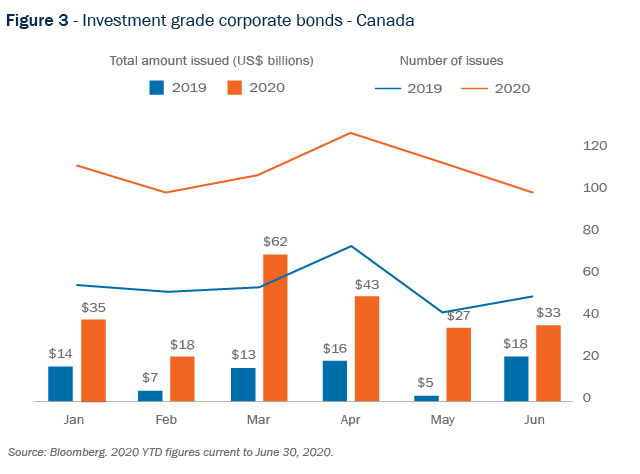 Investor demand for corporate debt also grew as investments in debt funds, and exchange-traded funds (ETFs) were on the rise through much of this past quarter. The increased demand has driven lower pricing and more favourable terms for issuers. In some cases, pricing and terms were even more favourable than could be obtained prior to the shutdown.

This demand is likely a sign of increased investor optimism about the economy and the impact of the pandemic, similar to what we have seen in the U.S. public equity markets. With interest rates expected to stay low for the foreseeable future, investors are drawn to higher-yield investments. Also buoying investor demand are government programs, which have brought more liquidity to the bond markets since they were introduced to address the pandemic’s economic fallout.

The United States Federal Reserve has the ability to purchase up to US$750 million of corporate credit under the Secondary Market Corporate Credit Facility. As part of its response to the crisis, the Fed has begun buying individual corporate bonds (including high-yield bonds) as well as ETFs which include high-yield and other corporate bonds.

Initially, many companies in the second quarter were issuing bonds to address liquidity needs, often in industries heavily impacted by the pandemic. As pricing improved, other issuers proactively accessed the market to refinance existing bonds, pushing out maturities and (in some cases) reducing interest coupons. Some issuers also paid down floating rate credit facilities with fixed rate bond proceeds, locking in low interest rates for an extended period of time.

Increased bond issuances may impact financial ratios that investors use to measure a company’s financial health. Bonds issued to refinance existing indebtedness do not increase an issuer’s leverage, and issuing notes with a lower interest rate than the debt being refinanced will improve interest and fixed charge coverage ratios. Similarly, pushing out maturities can provide issuers with the stability necessary to weather short-term reductions of revenue.

On the other hand, bonds issued to address liquidity needs (essentially replacing lost earnings to allow a company to satisfy its operating expenses) will increase leverage and worsen other financial metrics. It remains to be seen whether that will be a short-term or long-term issue, depending on the timing and magnitude of the resumption of business activities, which will vary widely between companies and industries.

While the bond markets were generally open to corporate issuers in the second quarter, the debt markets and the U.S. high-yield bond market, in particular saw brief periods of volatility, similar to the U.S. public equity markets, as investors reacted to economic and health news including news regarding vaccine status.

It seems reasonable to expect market volatility to persist in the coming months, particularly as the United States approaches the November election. As the longer-term effects of the crisis become clearer, companies will want to continue to explore the potential benefits of the debt markets to their business strategy.