As fallout from the crisis continues to unfold, markets around the world are adjusting and factors foundational to dealmaking—the role of government, the regulatory and legislative environment, public sentiment and political dynamics—are in flux.

Concerns the pandemic has raised about globalization are top of mind for many. In Canada, the federal government has announced its intention to increase scrutiny on certain cross-border transactions; and the Canadian public’s views on foreign investment may be shifting towards a “Canada First” sentiment.

With cross-border dealmaking expected to contribute to the recovery of the Canadian M&A market, what impact can foreign investors expect a more protectionist outlook in Canada to have on their M&A strategies?

In this analysis, we examine the current state of the Canadian M&A market and a recent public opinion survey on attitudes towards foreign investment, and discuss the new rules of engagement for businesses looking to initiate cross-border M&A transactions.

At the beginning of the year, the business outlook in Canada was optimistic—both in terms of domestic and global activity. 2019 had been a banner year for M&A in Canada, with megadeals driving up total deal value which reached a ten-year high of $102 billion (see Figure 1). Robust equity markets, low interest rates, healthy consumer spending and historically high levels of dry powder in the private equity sector were all expected to drive strong dealmaking in 2020.

When the pandemic hit, many companies shifted to survival mode with M&A taking a back seat; sales processes were paused or in some cases cancelled outright, resulting in a significant decrease in activity (see Figure 2).  There have also been a number of high-profile broken deals with transactions being litigated before the courts in Canada and the United States. 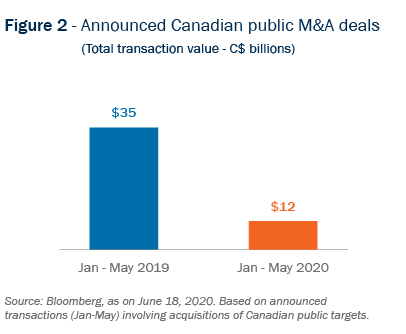 While Canadian domestic public M&A activity year to date suggests that overall deal volume for 2020 will remain on par with the levels recorded over the last few years, it remains too early to know how the recovery will unfold—and year to date aggregate deal values are low ($13 billion), indicating that deal sizes are small (Figure 3). 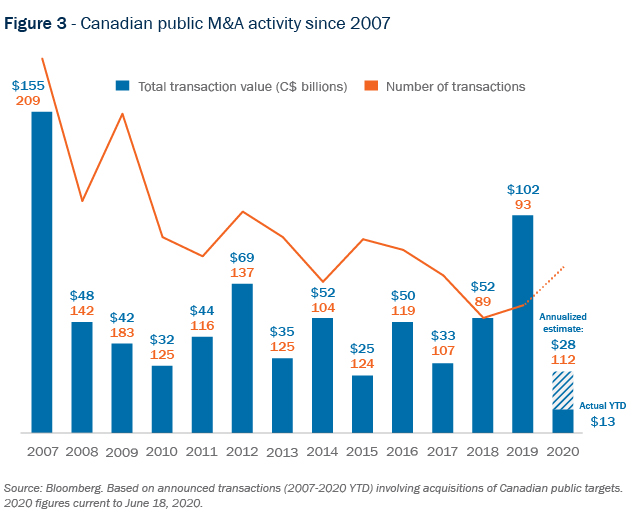 While M&A dealmaking has decreased across the board in 2020, cross-border M&A represents the majority of deal activity in Canada (Figure 4). In addition, inbound transactions experienced less of a decline than outbound or domestic transactions reinforcing Canada as a favourable destination for global investment, with its stable political, socio-economic and legislative framework an ongoing draw for investors. Europe continues to be the largest inbound source of foreign investment in Canada, both in 2019 and 2020 (Figure 4).

Meanwhile the United States remains the largest destination for Canadian outbound transactions, representing approximately one-third of total aggregate outbound deal values, although figures show that Canadian outbound investment activity into the U.S. has declined by over 30% year over year. 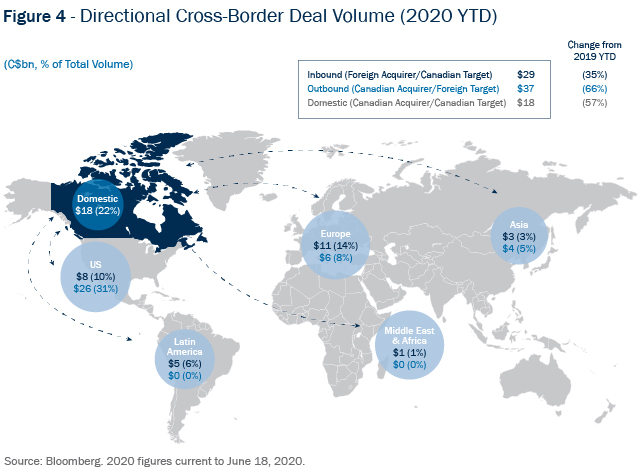 This section was prepared in collaboration with Elizabeth Roscoe, Senior Vice-President, Hill and Knowlton Strategies.

A recent public opinion survey conducted by Hill and Knowlton suggests that public sentiment is pivoting toward self-interest, protectionism, and a preference for domestic investment and deal activity1. There is strong support for the notion that Canada must become more self-sufficient and have a more resilient and domestic supply chain (Figure 5).

Over half (54%) of respondents were in support of federal government action to limit imports/trade and focus instead on Canadian business—and a full quarter of survey respondents reported that they did not want any foreign investment into Canada (Figure 6)—illustrating how pervasive the current protectionist outlook is in Canada. 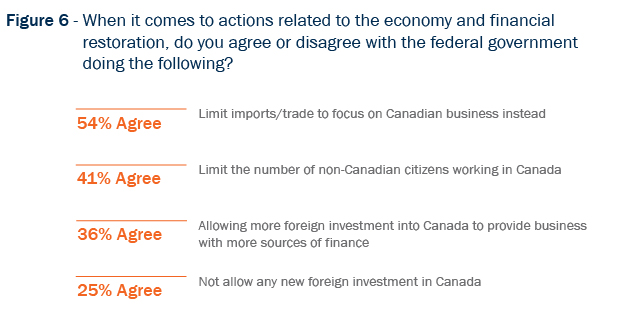 Respondents felt particularly strongly about protecting Canada’s manufacturing, retail and food processing industries—with a majority of respondents discouraging foreign-owned companies from buying up or merging with Canadian companies in these sectors (Figure 7). 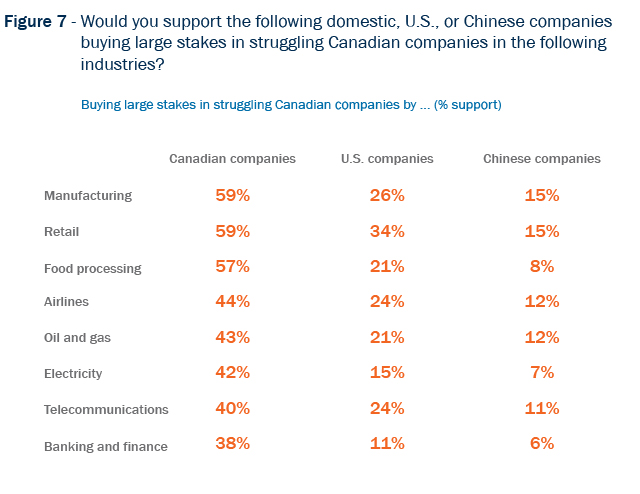 Regulated sectors like oil and gas, utilities and financial services appeared more vulnerable to Canadians showing a lack of support for a merger that would protect jobs (Figure 8), whereas food processing, retail and manufacturing sectors were met with more favourable responses. 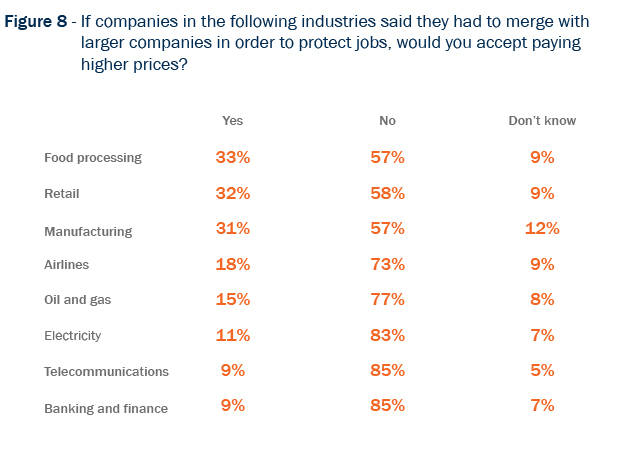 Regulatory risk is not a new phenomenon in international M&A, but the pandemic has prompted a strong response from governments across the world. According to The Economist, “countries representing 59% of world GDP have tightened their rules on foreign investment”. Canada is among them, announcing in April that it will use national security rules to screen all investments related to public health or involved in the supply of critical goods and services (e.g., in health care and PPE supply chains). Regardless of whether regulatory scrutiny will produce real barriers to foreign investment in unstable times, the government’s response is in political step with public sentiment.

The government’s policy statement and new enforcement approach also highlight how broad and nebulous the national security concept can be. For example, this new increased scrutiny would cover investments in manufacturers of PPE, pharmaceutical products or medical supplies—but also any “critical” goods or services, which could, for example, include grocery and pharmacy retailers and any other businesses in their supply chains.

All of this likely means that more investments will be subject to longer reviews, and that some will be rejected or only approved with conditions. The broad-based public skepticism of foreign investment referred to above is likely to give the government greater confidence to block or impose conditions in more cases.

Although the Industry Committee’s work is unlikely to result in any meaningful legislative or enforcement policy changes, it highlights the current political sensitivity surrounding foreign investment, particularly from “authoritarian countries.”

Carrying out cross-border deals in the next normal

The outlook for an M&A recovery in Canada is unclear because many questions around consumer confidence, government support and, not least, the duration of the pandemic remain unanswered.

However, despite increased public and political concern about inbound investment, we do not expect the government to apply a heavy hand to such transactions. The capital infusions that inbound investment can bring will be critical to the survival of the Canadian economy, and the government knows that. But as we have seen in past transactions, caution should be exercised around deals with the potential to be politically charged. This is particularly so in the current environment, with a minority federal government having heightened sensitivity about the political implications of an unpopular transaction. Complications arising from Lowe’s unsolicited bid for Rona in the middle of a provincial election in Québec serve as an apt example: in the end, the acquisition was successful, but it remains a cautionary tale of how timing and political climate cannot be ignored.

Deals will still get done in the current environment, but foreign investors will need to adjust their playbooks.

Transactions being negotiated at this point have more focus on certain deal provisions: MAE clauses, interim covenants and closing conditions (such as regulatory approvals) will be ongoing areas of heightened importance for transacting parties. Rejections are likely to remain rare, but parties should carefully consider how to best increase approval prospects and manage risk:

While many aspects of cross-border business are irrevocably altered, it is unlikely that foreign investment into Canada will be permanently or existentially threatened by the current move toward protectionism.

Leaders should anticipate and prepare their M&A strategy for an environment in which protectionist sentiments exist. Investors and businesses will want to build dealmaking strategies that can navigate this uncharted landscape.

1 This section of the article references survey materials from “COVID-19: State of Affairs”, a report prepared by Hill+Knowlton Strategies. May 14, 2020.

Read More From This Issue
Q3 | Summer 2020: Strategy for accelerated change
Companies have had to move fast to survive. They are now adjusting longer-term strategies to seize upon emerging trends and position themselves for success. Here are the latest insights from Torys.
Table of Contents
Related Experience