With Ontario’s cap-and-trade system joining the carbon market in California and Québec on January 11 the three jurisdictions will now hold joint auctions of emission allowances, which will be tradable across and capable of being used for compliance in all three jurisdictions. We look back at Ontario’s stand-alone cap-and-trade system for 2017, and look forward to the changes anticipated in 2018.

Together, the four auctions generated over $1.9 billion in total proceeds. Pursuant to Ontario’s Climate Change Mitigation and Low-carbon Economy Act, 2016, auction proceeds are held in the Greenhouse Gas Reduction Account to fund green initiatives that support the reduction of GHG emissions. The province’s funding priorities are outlined in its Climate Change Action Plan. A breakdown of the proceeds from each quarterly auction is set out below:2 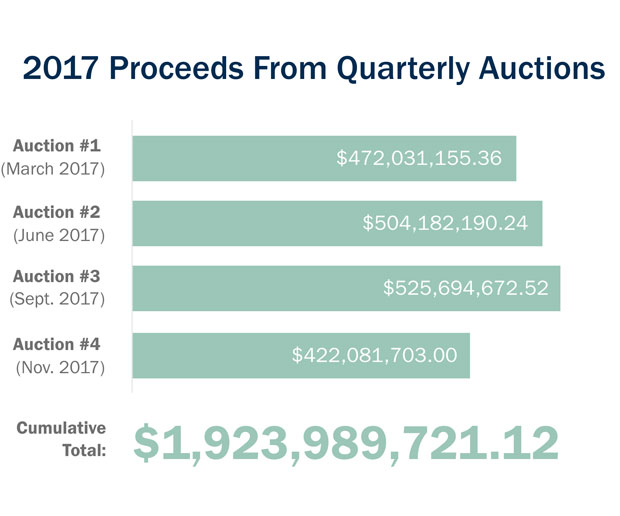 To help maintain a stable carbon price, Ontario imposed a reserve price for auctioned allowances, essentially a floor price below which allowances would not be sold. The first figure below highlights the reserve price and the actual settlement price at each auction. The subsequent figures show the proportion of available allowances sold, and ratio of qualified bids to available allowances.3 Notably, after three consecutive fully subscribed auctions for current vintage allowances, the fourth quarter auction saw a significant decline in the percentage of available 2017 vintage allowances sold (down to 83%) as well as a lower settlement price (crossed under $18 for the first time). This drop could potentially be attributable to uncertainties surrounding the upcoming 2018 provincial election, and expectations regarding market linkage (which is likely to increase liquidity and drive down prices for Ontario participants). 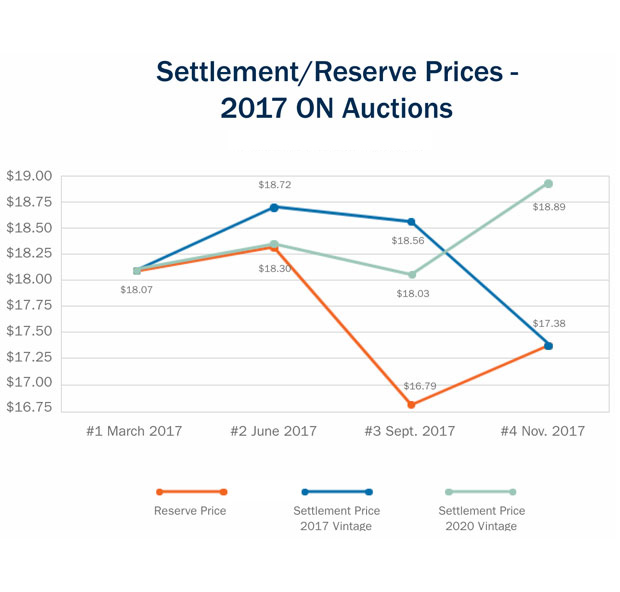 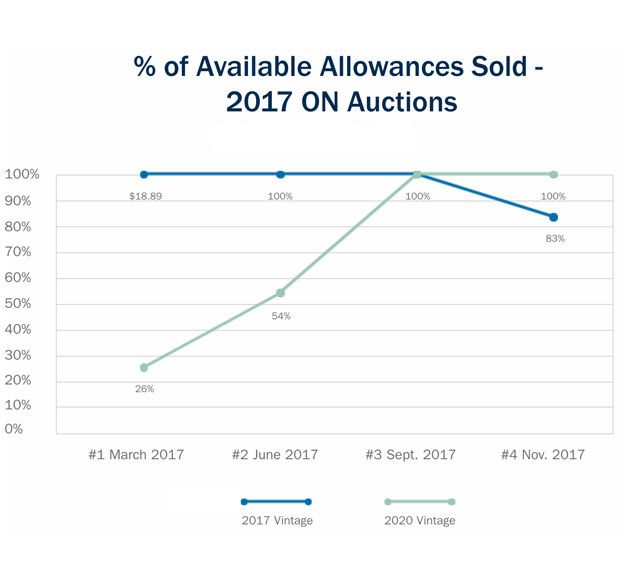 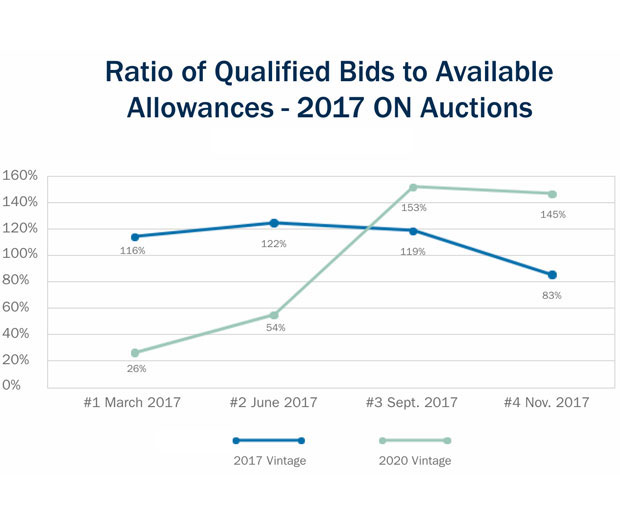 On January 30, 2017, Intercontinental Exchange Inc. (ICE)—a leading listing and trading venue for commodities markets—listed an Ontario Carbon Allowance Futures contract for trading, which effectively commenced the secondary market in Ontario. ICE also lists other vehicles, such as swaps and options contracts, that may become available to Ontario market participants as Ontario joins the California-Québec market. In addition to exchange-traded contracts, secondary market trading could also occur by way of over-the-counter bilateral transactions. Since January 2017, the secondary market in Ontario has experienced relatively low trading activity, not surprisingly given the recent inception of the market and the fact that linkage with Québec and California was only confirmed toward the end of the year.

As noted, Ontario joined the Québec-California carbon market on January 1. Each jurisdiction will coordinate its own auction reserve prices and price containment points. The anticipated benefits of linkage include increased liquidity of carbon allowances realized through access to a larger market, administrative efficiencies achieved through sharing in the administration of joint auctions, and lower overall costs of emissions reductions.

For context, the figure below shows the 2015 total annual emissions for each jurisdiction.4 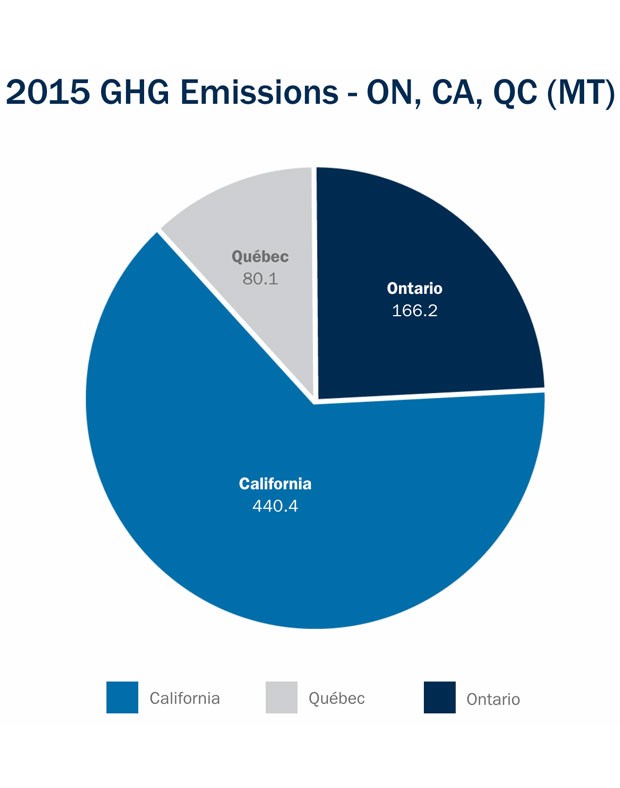 Because California’s annual emissions are nearly twice the combined total emissions of Ontario and Québec, California’s 2018 cap (i.e., the number of allowances it will issue this year) is also much higher. In 2018, the joint market will have a combined cap of 553.7 million allowances, consisting of 358.3 million for California, 136.4 million for Ontario, and 59 million for Québec. Therefore, in 2018, even though Ontario will only issue 96% of the total number allowances it issued in 2017 (as a result of the shrinking emissions cap), Ontario participants will now have access to a much larger pool of allowances.

Under a joint market, the increase in liquidity and California’s surplus of allowances are expected to create downward pressure on settlement prices for Ontario participants.

Under a joint market, the increase in liquidity and California’s surplus of allowances are expected to create downward pressure on settlement prices for Ontario participants. Given the size of California’s program, its market conditions are expected to be a key price driver post-linkage. California has experienced an oversupply of allowances as a result of covered emissions being consistently lower than the annual cap. Although the passage of AB 398 in July 2017 (extending California’s cap-and-trade program to 2030) has caused demand and prices to rebound, prices are still low relative to the floor.

For the combined market, a study estimated cumulative oversupply of 270 Mt (with an uncertainty interval of 200 to 340 Mt) through 2020.6 To this end, it would be reasonable to expect settlement prices in the combined market to hover just above the reserve price in 2018. Indeed, some forecasts indicate average 2020 prices of $17 or $18 per tonne, which would be relatively close to the likely reserve price of $16 or $17 by that time.

In its 2016 Annual Report, the Auditor General of Ontario, citing a May 2016 report by the MOECC, forecasts that linkage could initially result in Ontario participants purchasing in the range of 14.90 MT of allowances from California or Québec each year. Given the surplus of California allowances mentioned above, Ontario participants are likely to end up purchasing significant allowance volumes from California. At a price of $17-18 per tonne, the forecast above would result in a net outflow of approximately $250-to 270 million per year from Ontario to California to fund these acquisitions. This trend is likely to continue throughout the current compliance period which ends in 2020.

Ontario’s linkage with the Québec-California carbon market will open up a much larger pool of emissions allowances to Ontario participants. Because of the oversupply of California allowances relative to demand in the state, linkage is expected to maintain downward pressure on settlement prices at joint auctions, and on compliance costs for capped emitters relative to those costs in a standalone Ontario market. Of course, a consequence of this result is the expected outflow of funds to California for allowance purchases. In addition, entities participating in joint auctions will need to be mindful of the rules prohibiting the disclosure of certain auction-related information, and requiring the registration of certain corporate and business relationships with entities participating in the Québec and California systems.

More broadly, the next year will present growing opportunities in the secondary market for emissions allowances, particularly now that Ontario allowances can be used for compliance in Québec and California.

1 To facilitate linkage, in Fall 2017, the three jurisdictions had signed a harmonization and integration agreement. See https://news.ontario.ca/opo/en/2017/09/quebec-ontario-and-california-join-forces-to-fight-climate-change.html. The Ontario Ministry of the Environment and Climate Change (MOECC) had introduced the necessary amendments to its cap-and-trade regulations. See http://www.ebr.gov.on.ca/ERS-WEB-External/displaynoticecontent.do?noticeId=MTMzNTQx&statusId=MjAzMDcx&language=en and O. Reg. 450/17.