There is plenty of reason to expect increased momentum in Canadian private equity deal activity in the year ahead.

While the data shows that Canadian private equity deal volume and aggregate deal values are lower than in prior years, perceiving this decline as an indication of an overall weakening of the private equity industry is a mistake: institutional investor allocations to the industry continue to grow, and absolute dollars dedicated to the asset class are increasing. Financial investors are adjusting to the current deal and pricing environment and a new class of financial investor is emerging, all of which suggest that the private equity market is poised to strengthen in the months ahead.

Data sourced from S&P Capital IQ. Year allocations are determined by announced date. All data exclude investments in new issues and include both acquisitions of, and exits from, Canadian targets by financial investors. 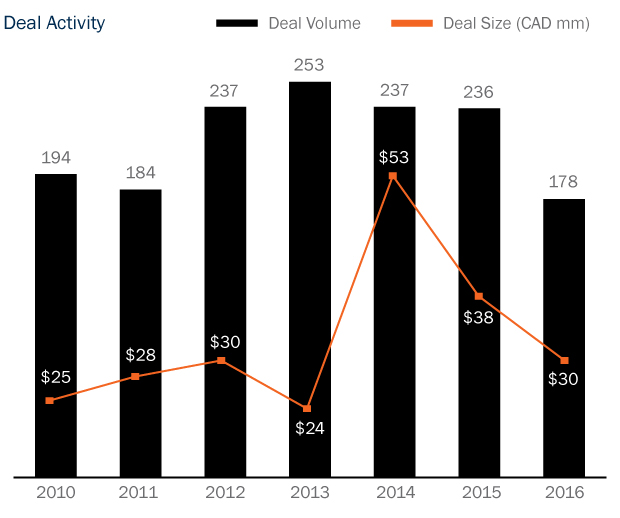 The volume of domestic M&A deal activity involving a financial buyer or financial seller declined in 2016, following a downward trend since a peak of deal activity in 2013. Similarly, aggregate deal values witnessed a two-year decline, falling to $30 billion in 2016. 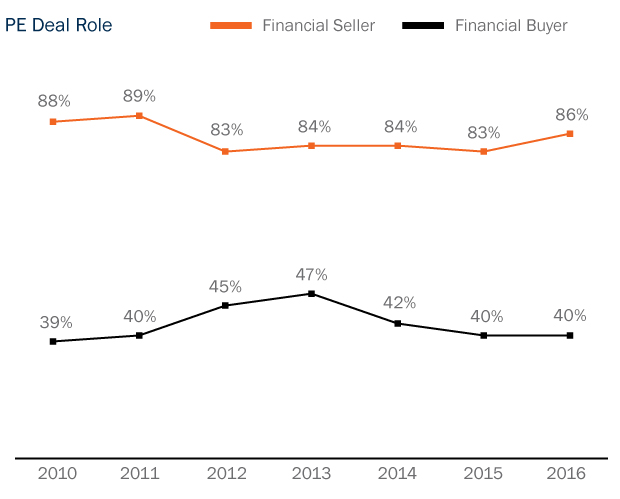 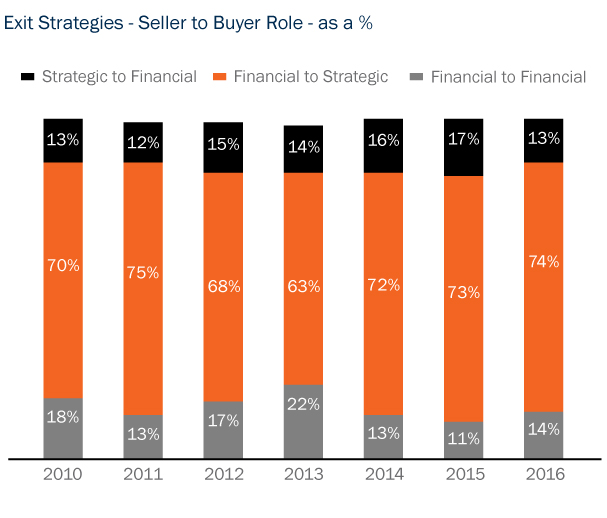 Sales by financial investors to strategic buyers were the most popular private equity exit strategy, reaching their highest level since 2010.

The volume of sponsor-to-sponsor transactions increased slightly in 2016 at 14% of deals, while fewer strategic sellers sold their businesses to financial buyers in 2016, at 13% of deals. 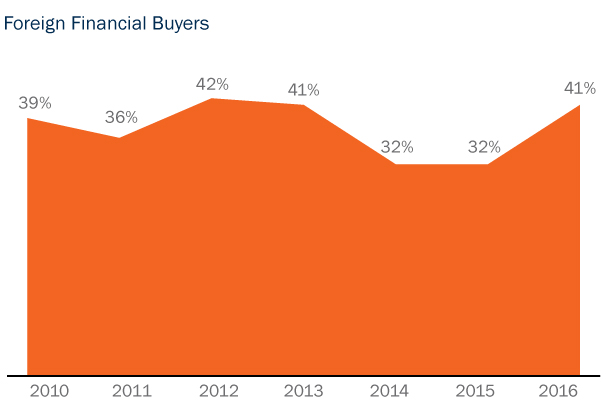 Investment by non-domestic financial buyers in the Canadian market rose sharply in 2016, accounting for 41% of overall domestic PE activity. 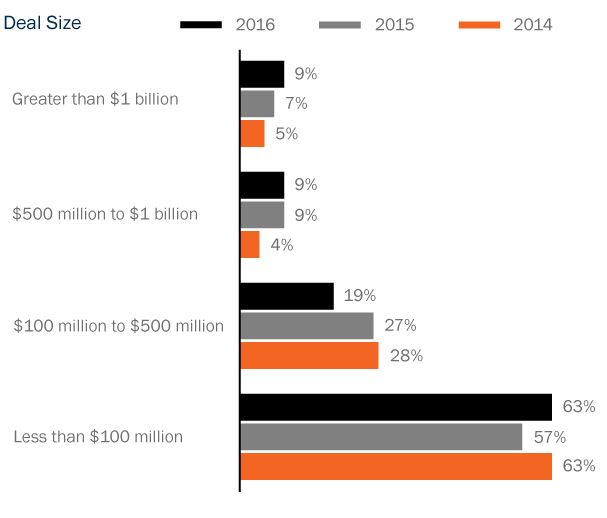 In 2016, more financial investor deal activity came within the range of "greater than $1 billion," though the vast majority of transactions continued to fall in the mid-market segment, the staple of Canadian dealmaking.

Family offices and sovereign wealth funds have emerged as serious contenders in the private equity landscape.

While investment opportunities exist, the price across asset classes continues to rise. In the U.S., private equity firms paid on average a 31% premium for acquisitions in 2016, an eight-year high according to Bloomberg data.1 In parallel with rising valuations, private equity firms’ uncalled capital is growing: private equity dry powder was estimated to reach U.S. $757 billion at the end of 2015.2 As pressure to invest continues to mount and more investors enter the market, we anticipate that private equity dealmaking will gain momentum in the year ahead.

Doing Deals in the Current Environment

In the current dealmaking environment, financial investors are adjusting their investment strategies to navigate pricing and competitive hurdles in the marketplace. Although deals continue to be sourced through proprietary and auction channels, market sentiment is that investors need to specialize in the sectors in which they operate in order to gain a competitive advantage: many consider that they simply cannot afford to do industry due diligence in "real time" as they compete for assets. For example, we are seeing private equity firms specialize in the healthcare and energy industries–the oil and gas sector alone captured almost one third of all Canadian private equity investments by the end of the third quarter last year, despite a general slowdown in the industry.3

Aside from developing deep industry knowledge, investors are expending capital to hire key industry executives with the right contacts to source transactions and proactively identify assets before they come to market. Efforts are being made to meet owners of private businesses that may sell in the future, and network with management teams of potential targets and their competitors in order to be ready when a potential investment opportunity comes to market. The general industry consensus is that if an investor first learns of a potential deal from the target’s advisors, it is essentially “too late,” losing out to those who have been laying the groundwork long before them.

At the bidding stage, many investors are exercising pricing discipline to ensure that they are not overspending in hyper-competitive auction processes.

In the broader marketplace, investors are also doing their diligence. They are identifying assets that other sponsors have held for an extended period of time as potential investment sources coming up for sale, and are watching for assets that might be spun-off in connection with corporate mergers.

Though private equity investors are spending more time and money in advance of any deal being done, at the bidding stage many investors are exercising pricing discipline to ensure that they are not overspending in hyper-competitive auction processes. Investors are strategically acquiring add-on businesses in advance of purchasing core targets in order to gain a competitive edge over other bidders and are increasingly relying on representation and warranty insurance to make their bids more attractive.

In an environment where bargains on initial capital investments are rare, private equity firms are also more focused on building value for their portfolio companies through the pursuit of aggressive M&A strategies, in addition to operational restructurings which may equally be critical to generating healthy returns. In the long term, we anticipate that these strategies will buoy dealmaking in the Canadian marketplace, as private equity continues to be nimble in adapting to current market challenges.

2016 was a year of new directions taken by companies, regulators and the marketplace—and the year ahead is primed to bear the impact of these changes.