The C-Suite has Skin in the Game: Governance Trends in Executive Compensation

Executive compensation continues to be a hot topic for investors, management teams and boards and is a subject of intensified public scrutiny. Accordingly, companies and their boards are spending more time ensuring their compensation policies and practices work to both align management and shareholder interests and link compensation to performance.

Clawback or recoupment policies are one of the many ways in which companies guard against inappropriate executive pay. Clawbacks typically enable companies to recoup incentive compensation that is based on financial results that were subsequently restated or where the executive has engaged in misconduct. There are currently no Canadian rules mandating clawbacks of executive compensation, however, governance organizations, institutional investors and proxy advisory firms continue to advocate for the voluntary adoption of clawback policies. 85% of issuers in the S&P/TSX 60 index disclose a clawback policy (see Figure 1) and we expect this number to increase. The growing popularity of clawbacks comes at a time when issuers, still intent on deterring the risk-taking behaviour held partly responsible for the ’08 crisis, are increasingly acknowledging the link between compensation and risk management. 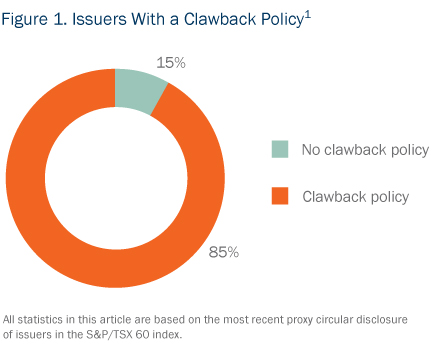 In 2015, the SEC proposed new executive compensation clawback rules under the Dodd-Frank Act that would apply to any issuer listed on a U.S. stock exchange, including Canadian MJDS issuers and other foreign private issuers. Issuers would need to adopt and enforce a clawback policy that complies with the rules or face potential delisting. Supplementing the existing U.S. clawback rules under the Sarbanes-Oxley Act, these proposed rules put at risk incentive compensation granted, vested or earned based on a financial reporting measure (examples include revenue, EBITDA, operating cash flow, financial ratios, total shareholder return) where the issuer restates its financial statements to correct a material error. Unlike most clawback policies voluntarily adopted by issuers, the proposed SEC rules would require clawbacks to be triggered regardless of whether the restatement involved any misconduct, would apply to both current and former executives and would cover incentive compensation granted, vested or earned over a three-year look-back period. Although the proposed SEC rules are quite broad, clawbacks would not apply to awards that are granted and vested solely based on time (e.g., time-vested restricted share units and stock options). 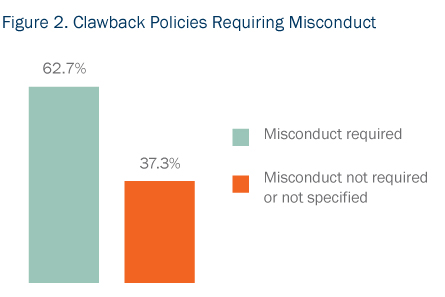 With the final rules not yet published, U.S.-listed issuers will likely have until 2017 to adopt a compliant clawback policy. Issuers should nonetheless begin preparing for the new clawback requirements by considering the need for a revised or new policy and potential amendments to their compensation arrangements. For example, issuers may want to consider providing a portion of long-term performance-based compensation that is not tied to financial reporting measures.

The growing popularity of clawbacks comes at a time when issuers are increasingly acknowledging the link between compensation and risk management.

As demonstrated in Figure 3, medium-term and long-term awards that pay out based on the achievement of performance objectives are used by nearly all S&P/TSX 60 index issuers and account for a significant percentage of all longer-term incentive compensation for executives. Heightened shareholder scrutiny on problematic pay practices has led issuers to focus more attention on long-term performance rather than short-term gains in designing compensation arrangements. 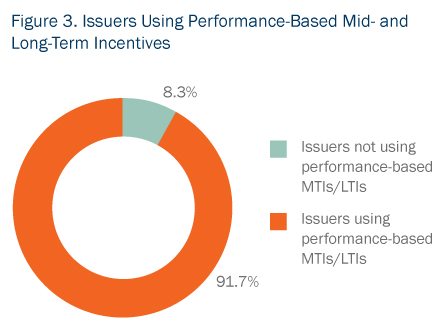 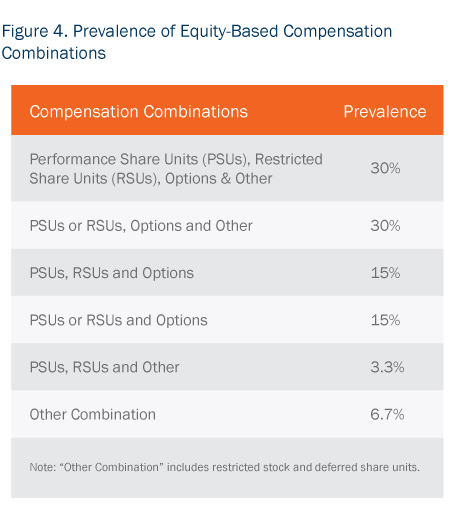 In the U.S., proposed pay-for-performance rules under the Dodd-Frank Act will require issuers, other than Canadian MJDS issuers and other foreign private issuers, to provide clear, concise and understandable disclosure of any compensation awarded to named executive officers, including describing how the executive’s actual pay compares to the issuer’s performance based on relative TSR. No similar rules have been proposed in Canada, however, a growing number of issuers voluntarily disclose information on CEO realized pay compared to company performance. 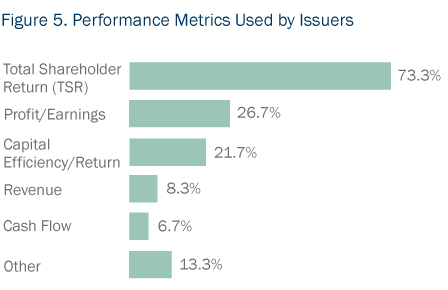 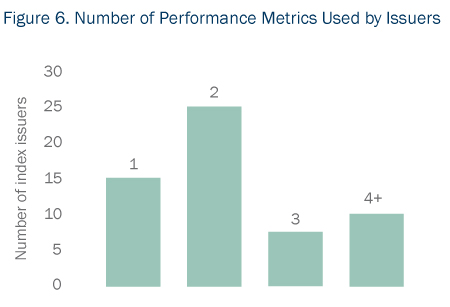 As a result of the significant focus on pay for performance, issuers must ensure appropriate performance metrics and targets are in place that reflect both their industry and organization. Setting long-term performance targets that are challenging but attainable is a constant struggle for companies, particularly when faced with volatile markets and other external forces. Boards must be mindful of how their compensation decisions will be explained to shareholders and should consider if and when it may be appropriate to exercise discretion to address unexpected changes impacting performance.

Executives are commonly required to acquire and hold a certain amount of equity in the company (see Figure 7), usually expressed as a multiple of base salary, within a specified period of time following appointment (see Figure 9). Share ownership requirements are designed to align executive and shareholder interests, focus on long-term value creation and minimize excessive risk-taking. Ownership requirements can typically be met through direct or beneficial ownership of shares as well as equity-based incentive awards. As demonstrated in Figure 8, restricted share units and deferred share units and deferred share units are often included in calculating an executive’s ownership holdings, whereas performance share units and stock options are less commonly included. The time period in which executives are expected to satisfy the requirements ranges from three to five years from an executive’s appointment, with five years being the most common. 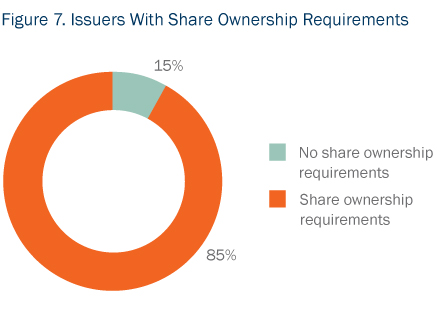 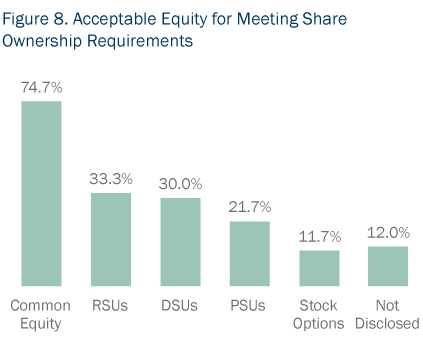 Share retention requirements or hold periods can impose share ownership requirements following retirement or resignation, or they can require that executives retain the after-tax value received on the exercise or settlement of equity-based compensation awards in shares for a specified period. These requirements are another way companies are ensuring the interests of their executive management teams are aligned with shareholders and that management is focused on long-term performance. 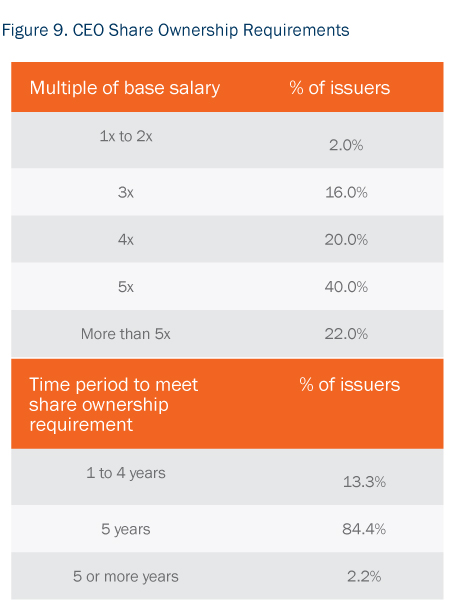