In the U.S., over 200 companies have recently adopted proxy access by-laws. What is proxy access? In short, it is the ability of a shareholder to include director nominees in the management proxy circular and to have those nominees listed directly on the company’s proxy card, alongside management’s proposed slate. Proxy access provides an alternative to a full-blown proxy contest for shareholders to nominate directors.

In Canada, the Canadian Coalition for Good Governance (CCGG) has publicly called for Canadian companies to implement proxy access. Alternatively, the Institute of Corporate Directors (ICD) has proposed guidance calling for greater engagement between shareholders and independent directors. The ICD approach would result in a substantial change from current practice, where shareholder engagement, at least prior to an activist intervention, is typically done by management.

The typical U.S. proxy access by-law permits shareholders who hold at least three percent of the outstanding shares and who have held those shares for at least three years to nominate board members, to a maximum of between 20% and 25% of the board seats (this maximum is an aggregate for all shareholder nominees). 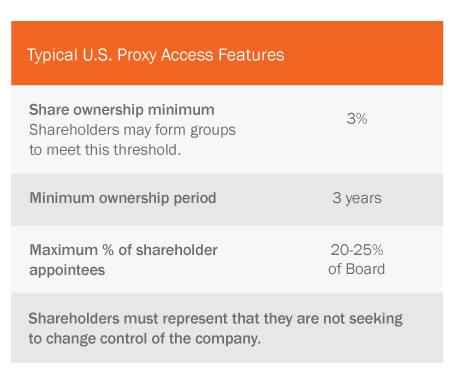 Since the trend toward proxy access by-laws in the U.S. seems well-entrenched at this point, we would expect to continue to see more U.S. companies adopting proxy access by-laws in the coming years. Despite the growing trend in the U.S., to date we are not aware of any shareholder actually having nominated (or announced an intention to nominate) directors pursuant to such by-laws. 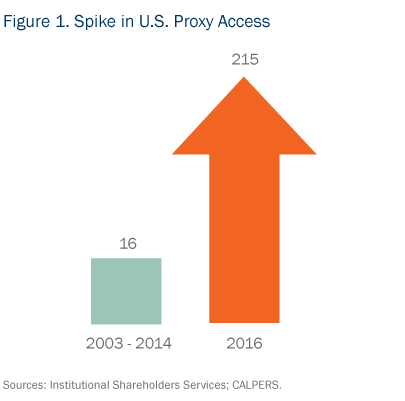 As Figure 1 shows, only 16 firms adopted proxy access from 2003-2014; in 2015, 117 firms adopted access. We expect that a comparable number of U.S. companies will adopt proxy access in 2016, either on their own initiative or in response to shareholder proposals.

We note that in Canada, unlike in the U.S., there are proxy access provisions in the corporate statutes. These provisions give shareholders holding at least included in the management proxy circular. However, the current statutory provisions have rarely been used, and the CCGG believes they are inadequate. Statutory amendments would nonetheless be necessary to accommodate certain elements of the CCGG proposal.

While we are not aware of any Canadian companies having adopted proxy access to date, it is likely only a matter of time.

To date, we are not aware of any Canadian company having adopted a proxy access by-law or policy. However, given the level of influence of U.S. governance developments in Canada and the desire of many cross-listed Canadian companies to follow U.S. practices—as well as the support of the CCGG—we expect that it is only a matter of time before a Canadian company does so. Whether proxy access in this form will see widespread adoption in Canada is a different story as there is resistance in some quarters to making any changes on the basis that current Canadian statutory provisions are more than sufficient. In other words, Canadian issuers should not rush to adopt a U.S. solution as a Canadian remedy may already be in place.

Areas that the ICD suggests for discussion at these meetings include board oversight of strategy, executive compensation, board composition and board oversight of risk. Other areas like corporate strategy and financial performance would continue to be matters of discussion between shareholders and management (and the ICD approach is not intended to replace engagement between shareholders and management). It is also important to ensure that directors participating in these meetings have the requisite skill set and background knowledge to engage meaningfully, and that they comply with securities law restrictions on selective disclosure of material non-public information.

We expect that many Canadian issuers, regardless of their views on proxy access, will embrace the ICD’s approach to shareholder engagement, as it will give them a better understanding of the views of shareholders on a regular basis and lessen the likelihood of serious issues arising in the future, including issues that might otherwise lead to an activist intervention. Regular engagement will work best in the case of long-term investors, where the benefits of an ongoing dialogue can be maximized.