Time For A Second Look At Income Trusts 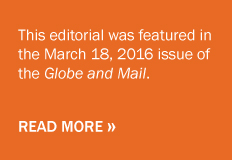 There’s a lot of talk these days about the need for Canadians to save more for retirement, but with a sputtering economy, weak job creation numbers and interest rates seemingly stuck at near-record lows, that’s easier said than done. Fortunately, Canada has a new federal government that has committed itself to applying open-minded and fresh thinking to tackling difficult issues. So, here’s a suggestion for Prime Minister Justin Trudeau and his government looking for ways to boost the economy and create a steady stream of investment income for Canadians who need it:

It’s time to give income trusts another look.

On October 31, 2006 the Conservative government killed income trusts and, in so doing, dealt a serious blow to capital formation and retail investor choice in Canada. It appeared at the time that the government was concerned about a loss of corporate tax revenue (despite the fact that numerous studies did not support that fear) and the unbridled growth of income funds generally. Unfortunately, the government’s actions that day ended any discussion about how income trusts could have been adapted to address those concerns without losing the benefits they brought to the Canadian economy and investors.

A lot has changed since late 2006. Back then, the economy was doing well. Capital markets were robust. Commodity prices were strong. There wasn’t the faintest inkling of the impending paralysis of credit markets in 2007 and crash of stock markets in 2008. Since that time Canada’s economy has not done well. Stagnant growth. Low or negative after tax returns on investment. Moribund capital formation. We are clearly in need of ideas to stimulate economic activity and returns for investors.

How would the return of income trusts help achieve these goals?

First and foremost, income trusts would give Canadian retail investors a wider choice of higher yield income-producing investment alternatives at a time when traditional retail debt investments are producing rates of return that are low, or even negative after tax and inflation. Income trust investments would give people more money to save for retirement or to spend and further stimulate the economy.

Income trusts would also provide small and medium-sized companies with access to the sub-debt market, giving them a source of funds at lower cost than other financing options currently available.

But can we bring back income trusts in a way that captures their benefits while avoiding the worst of their excesses (real or imagined)?

In their first incarnation, income trusts owned debt and shares of corporations in which the business was carried on. The corporation owned by the income trust relied on traditional sources of tax shelter, such as interest expense and capital cost allowance, to free up cash that could be paid to the income fund and on to holders of trust units. The amount of tax shelter was largely fixed at the inception of the trust, so any growth in the underlying business was subject to usual rates of corporate tax. But the moderating effect of this structure was lost when, with the concurrence of Canadian tax authorities in the form of favourable advance tax rulings, income trusts were organized without the use of corporations but rather through the use of partnerships, which are flow-through entities and do not pay corporate level tax. This change allowed—and even encouraged—virtually unlimited distribution of operating income without payment of any corporate tax.

So what if we went back to the early structure of income trusts, where the underlying business of the trust is held in a corporation that issues shares and debt to the trust, and where distributions on those securities would fund the income trust’s distributions to its investors? The moderating effect of this structure, with the underlying business held in a corporation and with the available tax attributes being essentially fixed at the outset, should avoid the excesses of the past, while allowing substantial benefits to flow to capital markets and investors. It might be necessary to put limits on the amount of debt that could be issued to prevent abuse, and that should be part of any discussion about the merits of reinstating income trusts for retail investors.

The issues presented by income trusts are challenging and complex, but if fairness and neutrality between retail and institutional investors are good policy objectives—and they are—it’s time to begin the discussion. By revisiting the issue in a spirit of flexibility and creativity, it should be possible to come up with a solution that is positive for investors and businesses, for capital markets, and for the economy as a whole.