Executive compensation arrangements in the context of M&A transactions are receiving more attention from investors, management teams and boards, and are increasingly subject to public scrutiny.

Consider the recent example involving Chubb Corp., where its shareholders voted overwhelmingly in favour of its proposed merger with Ace Ltd. but voted over 60% against the non-binding advisory vote on the company’s executive pay package. As a result, compensation arrangements are evolving from being primarily focused on severance to being focused on retention and the long-term best interests of the company.

To the delight of proxy advisory firms and institutional investors, a large proportion of public issuers have amended their long-term incentive plans and severance arrangements in recent years to provide for “double-trigger” change-of-control provisions (see Figure 1). Rather than severance payments and accelerated vesting of equity awards being automatically triggered on a change of control of the target company (a “single-trigger”), “double-trigger” arrangements are only triggered if there is both a change of control and an involuntary termination of employment.

"Double-trigger" arrangements would typically pay out if an executive is terminated without cause or is constructively dismissed within a specified period of time post-closing of the M&A transaction (typically 12-24 months). Stock options and other equity-based awards are exchanged for comparable awards of the acquiror or merged company and continue on the same terms and conditions post-closing.

"Modified single trigger” change-of-control arrangements are triggered if the executive resigns (without being constructively dismissed) within a specified period following the change of control.

“Double-trigger” arrangements are preferable from a corporate governance perspective as they ensure executives are neutral with respect to a change of control and are motivated to act in the best interests of the company. These arrangements also serve as a retention tool and provide greater flexibility for bidders to structure transactions without triggering massive cash outlays on closing. Strategic buyers and those with less cash on hand typically favour the rollover of equity-based awards. However, buyers may choose to cash out equity awards on closing despite the rollover ability. 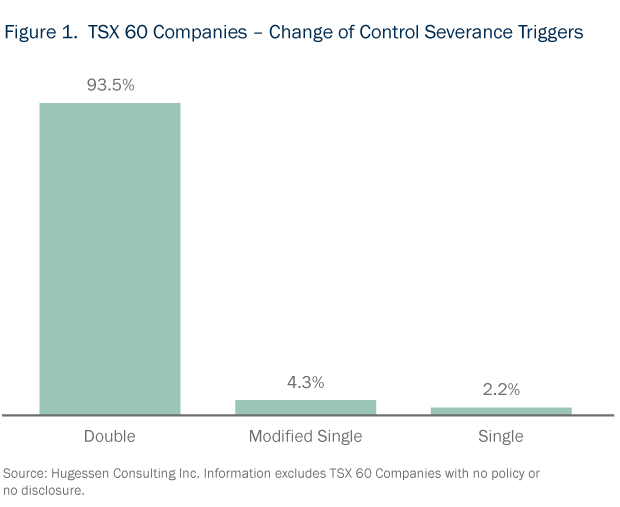 While the treatment of stock options and other time-based awards on a rollover is straight forward, performance-based awards present particular challenges. For example, if a performance share unit pays out based on the achievement of a financial metric or strategic goal of the target, how should that performance goal be assessed with respect to the merged entity post-closing? As compensation plans weigh more heavily toward performance-based awards, targets and bidders must pay careful attention to how these awards will be treated and valued on a change of control.

There is a growing trend for severance arrangements to be the subject of negotiation in the context of M&A deals. Where a bidder is looking to retain the target’s executives for the long-term or for a transition period, it may negotiate with the executives to forego their severance pay for an enhanced retention package provided the executive remains with the company for a specified period post-closing. Retention bonuses can be structured as cash payments or special equity awards.

Retention bonuses may be viewed as a problematic pay practice if they are implemented before or in anticipation of a change of control as they may be seen to be entrenching management and may deter potential bidders. As a result, retention bonuses are typically negotiated pre-closing in consultation with the purchaser. The agreements seek to align the interests of the target and the purchaser and encourage the retention of key members of senior management.

Special awards granted in the context of an acquisition may be desirable as a retention mechanism or as an incentive to achieve the strategic goals or expected synergies following the transaction. These awards can be structured as cash payments or special equity awards. Awards that are subject to performance conditions post-closing would typically only be granted to senior management in operational roles or to those whose performance could impact the particular performance goal. Transaction awards may also be used to ensure that compensation of the new executive team is similarly structured on a go forward basis.

Transaction awards may also be implemented by the target to retain key people until the transaction closes. Any such arrangements would generally be subject to the company’s conduct of business covenants in the purchase agreement or would require consent of the purchaser.

The corporate governance landscape in Canada is changing. This is not only influencing how corporations are engaging with their shareholders (see Trend 1, “Shareholder Activism: Who is Winning Now?”), but also how executive compensation arrangements are being structured. As the value of human capital in the pursuit of corporate strategy comes increasingly into focus for dealmakers, we expect that executive compensation practices will continue to evolve, with more attention on retaining key executives and rewarding achievement of long-term business goals.

Tags:
Board Advisory and Governance Executive Compensation Mergers and Acquisitions Pensions and Employment