Go With the (Capital) Flow in Cross-Border M&A

Global M&A has risen substantially in 2015, with the total value of deals internationally surpassing US$3 trillion.1 Amid this period of growth, Canadian M&A has experienced an overall decline in the aggregate deal value of domestic Canadian M&A activity alongside significant growth in outbound investments, with Canadian investors seeking high-quality investment opportunities on a global level.

In 2016, we expect Canadian buyers to follow the flow of capital both abroad and domestically: globally, domestic buyers will continue to be active with large-scale acquisitions in foreign markets; and in Canada, investors will look to capitalize on opportunities emerging from recent weakness in the Canadian economy.

Canadian institutional investors have been the principal drivers of the growth of outbound investment activity. Some of the largest deals in 2015 involved a financial sponsor or investor. For example, Canadian pension funds, Onex and Brookfield Asset Management all actively engaged in foreign M&A activity in 2015. In addition to the CPPIB and Borealis acquisitions, notable examples of this trend include CPPIB’s co-sponsorship of the C$6.7 billion U.S. acquisition of Informatica, the Caisse de dépôt’s et placement du Québec's US$1.1 billion acquisition with Hermes Infrastructure of a stake in Eurostar, and the joint AIMCo/OMERS acquisition of UK-based Environmental Resources Management for US$1.7 billion.

While RBC’s US$3.2 billion acquisition of City National in the U.S. demonstrates that this trend is not limited to private equity, we expect that Canadian pension funds and private equity groups will continue to dominate outbound M&A activity from Canada. 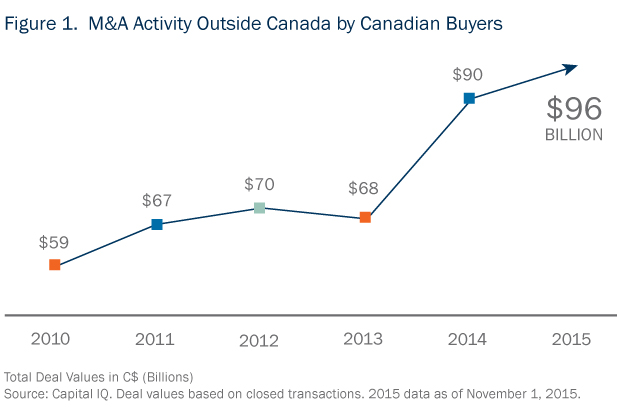 The total value of deals involving a Canadian target fell to C$46 billion in 2015, from C$160 billion in 2014 (see Figure 2). We expect that this recent decline in domestic M&A in Canada will not last and that macroeconomic factors will create favourable opportunities for both foreign and domestic strategic buyers in 2016. 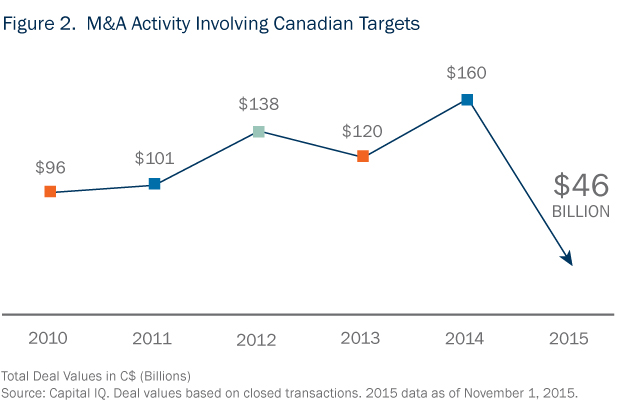 Current market conditions have forced some Canadian companies to consider divestitures of non-core assets to improve balance sheets. We also see distressed M&A opportunities developing, particularly in the oil and gas, mining and retail sectors (see Trend 7, “Distressed M&A Opportunities are Emerging”). Competitors with strong balance sheets and access to financing are well positioned to take advantage of these opportunities to make strategic acquisitions as is illustrated by Crescent Point’s C$1.5 billion acquisition of Legacy Oil and Gas.

A relatively weak Canadian dollar is likely to drive an increase in inbound acquisitions of Canadian targets by foreign buyers. U.S. companies in particular, given moderate returns at home and a strong U.S. dollar, will be encouraged to look to foreign markets, including Canada.

Rules Change on the Horizon

As foreign investors turn their focus to Canada, they should expect M&A targets to wield more leverage than in the past to negotiate deals. Canadian takeover bid rules are changing to empower boards and redefine bid dynamics between targets and hostile bidders. Under Canada’s proposed new takeover bid regime, all non-exempt takeover bids will have to stay open for acceptance for a minimum duration of 120 days (subject to a target board’s ability to shorten the timeframe to as little as 35 days in certain cases). The proposed bid rules will also allow a hostile bidder to shorten its bid period if the target enters into a white knight transaction.

Energy: A Sector to Watch

Despite a significant decline in the number of energy-sector M&A deals in 2015 due to weak industry fundamentals, the value of completed deals remained relatively high as both strategic and financial buyers looked to take advantage of discounted assets—a trend that appears to be set to increase in the year ahead.

Some of the largest domestic M&A deals in 2015 included energy-sector transactions such as Cenovus’ sale of its interest in Heritage Royalty to Ontario Teachers’ Pension Plan Board for C$3.3 billion, Apache’s sale of Quadrant Energy to Brookfield Asset Management and Macquarie Capital for C$2.6 billion and the previously mentioned C$1.5 billion acquisition by Crescent Point of Legacy Oil & Gas. With continuing depressed commodity prices in 2016, additional divestitures of attractively priced assets will drive greater M&A activity in this sector.

Domestic investors show no sign of slowing their activity in international investments for the year ahead, and we are starting to see opportunities for consolidation of Canadian energy targets increasingly attracting strategic investors and financial buyers looking to deploy capital in Canada. We anticipate that growth, both in outbound deals and renewed vigor in domestic activity, will help define Canadian M&A in 2016.