The U.S. markets remain a favored destination for foreign (non-U.S.) companies seeking capital. Complying with rigorous U.S. securities laws is a given. Less expected, however, is what may be an issuer’s first encounter with the unusual U.S. tax regime for “passive foreign investment companies”—the so-called PFIC rules.

Purpose of the Regime

The PFIC rules aim to prevent U.S. taxable investors from deferring tax by holding passive investment assets through a foreign corporation. If a U.S. investor owns shares of a PFIC, then gain upon the sale of the PFIC shares generally is taxed as ordinary income, increased by an interest charge. The low capital gains rates enjoyed by non-corporate U.S. investors generally do not apply to shareholders of a PFIC. Nor are dividends paid by the PFIC eligible for lower “qualified dividend” tax rates.

Because U.S. taxable investors generally balk at the prospect of investing in a PFIC, few foreign issuers can afford to ignore the possibility of becoming a PFIC.

Few foreign issuers engaged in an active business expect to be PFICs. The status arises only if a foreign corporation’s passive income or assets equal or exceed certain high thresholds—75 percent and 50 percent, respectively. Nonetheless, the presence of large amounts of cash on a balance sheet, even working capital, can cause an issuer to be a PFIC. In some cases, the corporate structure itself causes an issuer to be a PFIC, particularly when the issuer holds non-controlling interests in other corporations. The risk is especially high for startups with little or no active income.

Because U.S. investors generally balk at the prospect of investing in a PFIC, few foreign issuers can afford to ignore the possibility of becoming a PFIC, and nearly all foreign issuers must address the PFIC risk in U.S. public filings.

Fortunately, several strategies may reduce or eliminate this risk, depending on the circumstances. For example, some foreign issuers take advantage of the U.S. “check the box” system of tax classification to elect to be classified as partnerships. An entity classified as a partnership for U.S. tax purposes cannot be a PFIC. Thus the check-the-box election, if permitted, can eliminate the PFIC risk. Foreign issuers with meaningful U.S. assets may take another approach to risk reduction. By making small changes in the corporate structure, it may be possible to cause all U.S. assets and income to be “active” and thus favorably viewed for purposes of the relevant tests. These and other minor changes may dramatically affect the potential for a foreign company to be a PFIC. 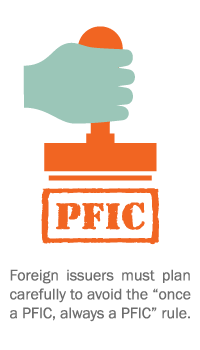 Traps for the Unwary

The PFIC regime is replete with traps for the unwary. For example, a new vehicle created and funded with a small amount of cash too soon before going public can create an “inadvertent” PFIC. Even if the company’s active assets and income later provide comfortable margins under the 50 percent and 75 percent tests, the company can remain a PFIC with respect to initial U.S. investors under the “once a PFIC, always a PFIC” rule. This rule also has the strange result of causing some companies to be PFICs with respect to some U.S. shareholders but not others.

A company’s PFIC status meaningfully affects its reception among U.S. investors. A foreign issuer that pays early attention to PFIC matters stands to substantially boost the chances of a successful offering.