The cross-border income fund structure involves a Canadian public mutual fund trust that acquires a U.S. entity. The acquisition is structured so that the Canadian income fund normally holds both subordinated debt of and an equity interest in the U.S. entity. For Canadian income tax purposes, the mutual fund trust is not subject to entity-level tax in Canada, whereas the U.S. entity will be subject to taxation in the United States. In addition to the normal expenses and deductions that the U.S. entity may have available to it, the subordinated debt in the structure provides for an interest deduction for U.S. tax purposes, subject to certain rules.

There are four main considerations that the cross-border income fund structure must deal with for U.S. tax purposes. The first is whether a particular debt instrument should be treated as debt or as equity. There are a number of factors that must be considered in making this determination, including that the debt must be on arm’s length or market terms. The second relates to the U.S. “earnings stripping” rules, which are the U.S. analogue of the “thin capital” rules in the Canadian tax system. These rules limit the overall annual interest deductions that the U.S. entity may claim in circumstances where debt is owed to a related non-U.S. person. The third consideration relates to U.S. withholding tax on the interest paid across the border to the Canadian income fund. In the past, avoiding withholding tax required reliance on the U.S. “portfolio interest exemption,” but amendments to the Canada/U.S. tax treaty caused interest to be generally exempt from withholding tax even if paid to a related person. 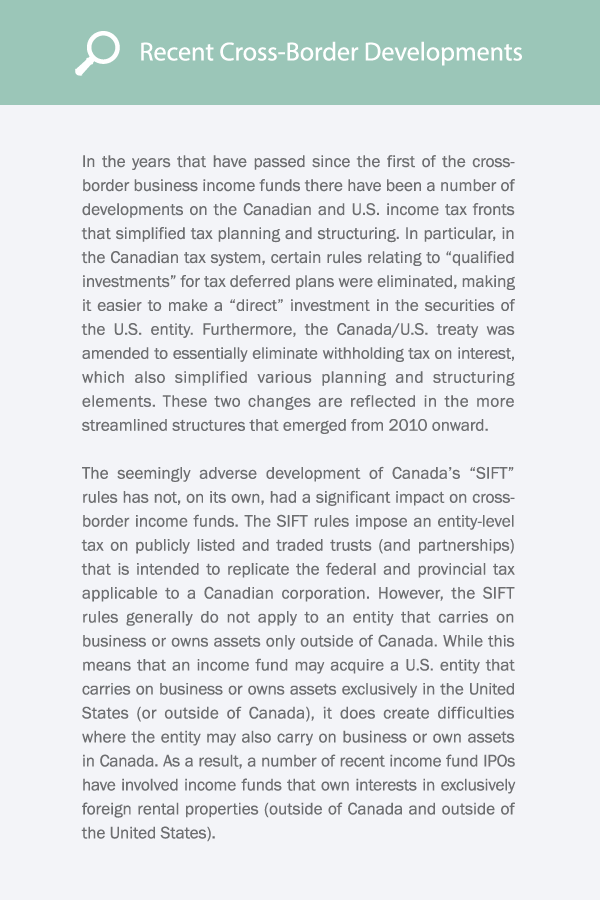 The consequence of the income fund being subject to the inversion rules is that the income fund is considered to be a U.S. corporation for U.S. tax purposes. This is problematic in the context of a yield vehicle in the Canadian market since it means that the U.S. entity will have to withhold in accordance with U.S. tax rules on distributions paid to Canadian unitholders. A Canadian unitholder should be entitled to a foreign tax credit in computing its Canadian tax liability for any such U.S. withholding tax. However, the income fund would be subject to U.S. tax on its worldwide income (in the same way as an actual U.S. corporation), which could include the interest income in respect of any subordinated debt it may hold of the U.S. entity.

There is an exception from the inversion rules where the income fund meets the test of having “substantial business activities” in Canada. This test requires more than 25% of the assets, employees and income of the overall enterprise to be located in or derived from Canada. This test is not easy to rely on for cross-border business income trusts since a trust that has “substantial business activities” in Canada would most likely be subject to the SIFT rules on the Canadian tax side.

There is, however, another exception to the SIFT rules where the income fund qualifies as a real estate investment trust (REIT) for Canadian tax purposes. Consequently, in the real estate space, it is possible to combine (a) the REIT exception from the SIFT rules for Canadian activities, and (b) the “substantial business activities” exemption from the U.S. inversion rules. This has been done for several recent IPOs involving Canadian REIT vehicles that have rental properties in both the United States and Canada in circumstances where the former U.S. shareholders of the U.S. enterprise continued to have an interest in the U.S. enterprise (i.e., in an “UPREIT” structure involving securities that are “exchangeable” for units of the REIT).

Another approach to the inversion rules in the REIT context is to “embrace inversion.” In this case, the Canadian income fund acquires an interest in U.S. rental properties and is “inverted” by design, which means that it is treated as a U.S. corporation for U.S. tax purposes. This allows the Canadian income fund to elect to be treated as a U.S. REIT for U.S. tax purposes. Because it is regarded as a U.S. REIT, the income fund is not subject to U.S. taxation if it distributes essentially all of its earnings to unitholders.

Some are choosing to take the approach of “embracing” inversion rules, treating the Canadian income fund as a U.S. corporation.

If “embracing” inversion, the income fund will be required to withhold U.S. tax on distributions paid to Canadian unitholders, but it will be able to designate its foreign source earnings (from the U.S. rental properties) to the unitholders so that the unitholders will be considered to have earned the foreign source income and this will entitle the unitholders to a foreign tax credit for such U.S. withholding tax in computing their Canadian tax liability. As mentioned, the income fund will not be subject to the SIFT rules, primarily because all of the rental properties are located outside of Canada. This kind of planning has been done for several recent IPOs involving Canadian REIT vehicles that have rental properties only in the United States.

Accordingly, notwithstanding the challenges posed by the U.S. inversion rules, there are various structures that may be used in the right circumstances involving cross-border income funds, particularly in the REIT context. It may also be possible to avoid the inversion rules by designing the securities held by the former shareholders of the U.S. entity such that they are not “economically equivalent” to the units of the income fund. It will be interesting to see how approaches to structuring cross-border income funds will evolve in concert with changing rules and dynamics.