Observers of our capital markets frequently comment on the problem of insider trading, especially in connection with takeover bids and other merger and acquisition transactions: “the most controversial feature of take-over bid transactions in recent years has been centered on the allegations made in the press and elsewhere that such transactions have led to ‘insider trading’ profits, benefitting directors and other insiders.”

That statement about insider trading could have been made about any number of recent high-profile cases in Canada, and while it was made by the authors of the Kimber Report, published 50 years ago, it expresses a perennial concern of securities regulators with detecting and prosecuting insider trading. In Ontario, recent high-profile decisions of the Ontario Securities Commission (OSC), legislative reforms and enforcement initiatives, some of which are discussed below, reflect a significant focus on illicit market activity.

Closing the Gap on Insider Trading

Ontario’s Securities Act (the Act) prohibits a person in a “special relationship with a reporting issuer” from trading the securities of that reporting issuer with knowledge of material information that has not been generally disclosed. Over the last several years, the legislature has proposed various amendments to the Act aimed at closing gaps identified in the insider trading rules, demonstrating a legislative intent to tighten the regulation of insider trading. Where the legislature has not yet cured perceived defects in the Act, the OSC has increasingly used its public interest jurisdiction to do so.

Expanded Definition of Insider Trading to Capture All "Issuers"

In 2013, the Act’s definition of “special relationship” was expanded to capture insiders, affiliates or associates of a company that is “considering, evaluating or proposing” to make a takeover bid for or engage in a business combination with a reporting issuer or to acquire a substantial portion of a reporting issuer’s property. Prior to this amendment, insiders, affiliates and associates of a company were only considered to be in a special relationship where the company was “proposing” to engage in these actions.

These changes were intended to close the gap in the insider trading rules identified in the OSC’s decision in Re Donald.3 In Re Donald, the OSC concluded that Paul Donald, an officer of a public company who traded in securities of a company he knew to be a potential target of his employer, had not violated the insider trading rules because he was not in a “special relationship” (as it was then defined) with a reporting issuer. Although Donald’s employer was actively considering the potential transaction, because his employer had not formally determined that it would “propose” to make a bid, Donald was held not to be in a special relationship with a reporting issuer. Again, notwithstanding the absence of a technical breach, the OSC engaged its public interest jurisdiction to make an order against the respondent.

A timely deal made just before a public announcement is one example of the “mosaic of circumstantial evidence” that the OSC has used to describe the broad range of evidence that can help prove insider trading.

Use of the Public Interest Jurisdiction

Under the Act, the OSC can make an order in the public interest even where there has been no technical breach of securities laws. Increasingly, the OSC has used its public interest jurisdiction to capture problematic trading activities that fall outside statutory prohibitions but which are nonetheless perceived to be contrary to the spirit of the insider trading rules in the Act.

Before the legislature amended the definition of “special relationship” and proposed an expanded application of the insider trading rules in the Act, the OSC had used its public interest jurisdiction to make orders against the respondents in Re Donald, Re Suman and Re Hariharan, despite the absence of a technical breach of the Act. 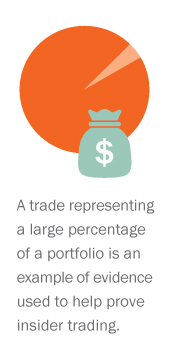 The settlement approved in Re Moore further demonstrates the OSC’s tendency to engage its public interest jurisdiction to capture problematic trading activities. In that case, the respondent, an experienced investment banker, was able to anticipate a merger transaction based on his special expertise (such that there was no “materially undisclosed fact”). The respondent settled on the basis that this was contrary to the public interest even if the insider trading rules themselves were not breached.

Proving insider trading is difficult. While it is not difficult to demonstrate that a person traded, it is challenging to demonstrate that she or he possessed undisclosed material information when the trades occurred. It is often necessary to rely on circumstantial evidence from which reasonable inferences of an individual’s knowledge of undisclosed material information can be made.

In Re Finkelstein the OSC explained that a variety of types of circumstantial evidence can be the indicia of insider trading, including: unusual trading patterns; a timely transaction in a stock shortly before a significant public announcement; a first-time purchase of the stock; an abnormal concentration of trading by one brokerage firm or with one or a few brokers; and a trade that represents a very significant percentage of the particular portfolio. These indicia are not exhaustive, and do not each need to be established in every case. In every case, “insider trading and tipping cases are established by a mosaic of circumstantial evidence which, when considered as a whole, leads to the inference that it is more likely than not that the trader, tipper or tipee possessed or communicated material non-public information.”5

OSC Whistleblower Program and Other Initiatives

The OSC has developed new initiatives aimed at increasing the number of prosecutions and improving the speed and efficiency with which enforcement matters are resolved. Although not specific to insider trading, these initiatives will be important tools for the OSC in the prosecution of insider trading matters.

In February 2015, the OSC released OSC Staff Consultation Paper 15-401, which proposes the development of a whistleblower program at the OSC. The program, which is the first of its kind among Canadian securities regulators, would encourage the reporting of serious misconduct of Ontario securities law by offering a financial incentive to whistleblowers. More specifically, a whistleblower would be eligible to receive up to 15% of the total monetary sanctions ultimately ordered against the respondent as long as the information provided by the whistleblower was provided voluntarily, of high quality and original in nature and the monetary sanction against or settlement payment by the respondent exceeds $1 million. A whistleblower program may well lead to information about when an issuer’s directors, officers and employees learned of material information, allowing the OSC to detect potential cases of insider trading.

A whistleblower would be eligible to receive up to 15% of the total monetary sanctions ultimately ordered against the respondent.

Other recent enforcement initiatives may also lead to the commencement and resolution of insider trading cases. In March 2015, the RCMP’s securities investigation office (the Integrated Market Enforcement Team) moved into the OSC’s offices, with a view to ensuring closer cooperation between the organizations, and in April 2015, the OSC announced the launch of a pilot mediation program, which will provide respondents involved in enforcement proceedings and OSC Staff the option of participating in a mediation to resolve the dispute.

2(2015), 38 O.S.C.B. 3356, 3373. As in Re Suman, the company in issue was not a “reporting issuer” as defined by the Act. The settlement included a finding that the respondent’s conduct was contrary to the public interest, despite the absence of a technical breach.