Japan Outside Japan: Investors Will Look to North America for M&A

There have been a number of significant outbound M&A deals from Japan in recent years. These include Suntory’s US$16 billion acquisition of Jim Beam, Softbank’s US$21 billion acquisition of Sprint and the US$29 billion merger of Tokyo Electron and Applied Materials. The size of these transactions is unprecedented, establishing Japanese companies as serious contenders in major global M&A transactions. A host of factors suggests that Japanese companies will continue to look outside Japan, and in particular to North America, for M&A opportunities in 2015.

In December 2012, Japan’s Prime Minister Abe began implementing the “three arrows” of his Abenomics policy to awaken the “animal spirit” of the Japanese economy: fiscal stimulus consisting primarily of government spending targeted at infrastructure and renewable energy projects to generate short-term growth; monetary easing aimed at bringing the economy out of a 20-year deflationary spiral; and structural reform aimed at fostering long-term growth and making Japan more accessible to foreign investors. The initial effects of Abenomics included a weakened Japanese yen, a rise of more than 50% in Japanese stock prices and an increase in domestic consumption. Increased consumption has since tapered following the rise in consumption tax from 5% to 8% on April 1, 2014. However, a recent Tankan corporate survey showed that business sentiment in Japan has improved notwithstanding the tax rise. Large corporations are reportedly planning an 8.6% increase in investment in the coming year (up from 7.4% as of the time of the previous survey). The long-term effect of Abenomics is still unclear, but the government’s objective of increased economic activity is likely to boost M&A activity, including with respect to inbound transactions.

Japan’s population is declining and aging, and its workforce is shrinking. In an attempt to address this, the government is taking steps to encourage more meaningful participation in the workforce by women and is starting to seriously consider changes to its immigration policy. Despite these initiatives, limited domestic growth is forcing Japanese companies to look outward for growth opportunities. Japanese companies have been involved in overseas investment for years with a focus on trade (primarily export), and the sourcing of raw materials to fuel their domestic industry. However, the limited prospects for domestic growth have resulted in Japanese companies looking to overseas markets for investments that can contribute to their long-term sustainability, as evidenced by the Jim Beam and Sprint transactions described earlier. The desire to be involved in overseas M&A activity is no longer limited to the more traditional multinational trading houses and automobile manufacturers. Now even purely domestic Japanese corporates are focused on expanding their businesses outside of Japan. 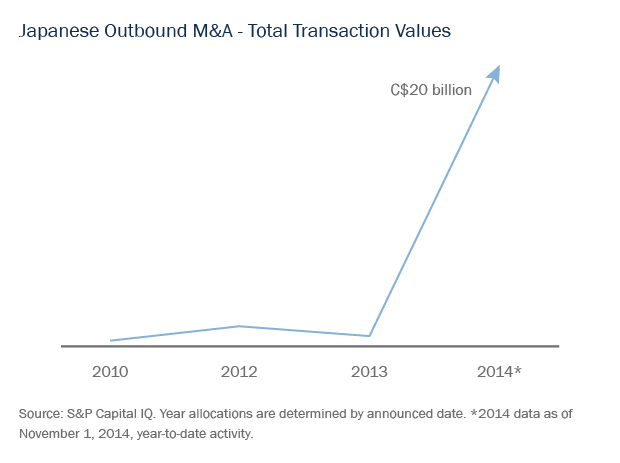 Geographic proximity to Japan, a large population and dramatic growth in recent years have led many Japanese companies to view China as a natural place to expand their businesses, both through a shift of manufacturing operations to the lower-cost jurisdiction, and by accessing the Chinese market. However, Chinese concerns over Japan’s historical militarism, a dispute between the two countries over the Senkaku islands and an increase in Chinese nationalism have all contributed to some Japanese companies feeling that they are no longer welcome in China. This has sparked renewed focus by Japanese companies on other Asian countries, and the Americas, as targets for their investments. 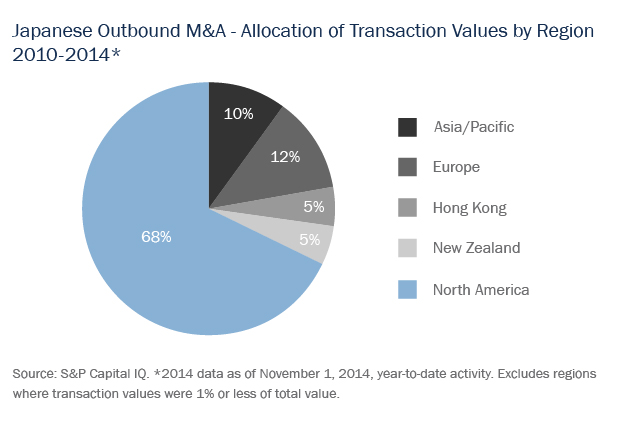 Japanese banks, trust banks, pension funds, construction and engineering companies, financial and technical advisers, and trading houses are all demonstrating a strong level of interest in infrastructure projects in Japan, North America and Australia. Although Japanese construction and engineering companies have a significant pipeline of new work in anticipation of the 2020 Tokyo Olympics, these companies see a need to begin cultivating a post-Olympics work pipeline now and are actively seeking projects in North America.

Japan’s nuclear power generation has been suspended since the earthquake and tsunami of 2011, resulting in a 26% reduction in power generation. Japan is already the world’s largest importer of liquefied natural gas and the second-largest importer of coal. Although the Japanese government is encouraging greater use of renewable energy such as solar, wind, geothermal and biomass, these sources still only make up a small percentage of Japan’s total energy consumption. To secure its energy supply, the Japanese government is encouraging participation by Japanese companies in energy exploration and development projects around the world. This is leading to an increase in Japanese investment and M&A activity in the energy sector outside Japan. 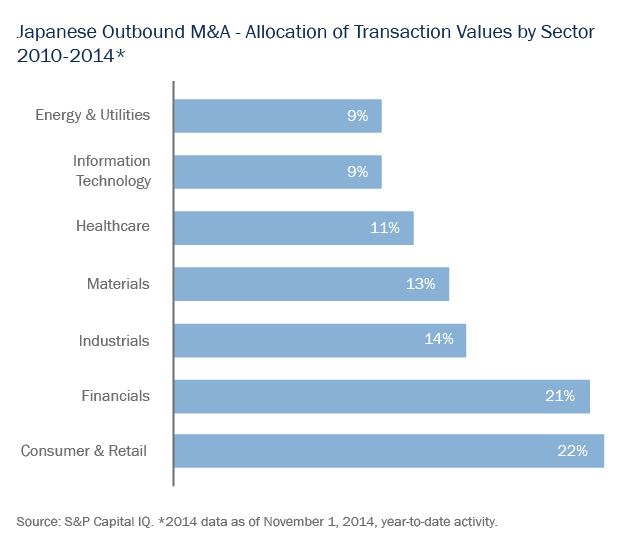 One challenge that Japanese companies face in M&A is their relatively slow decision-making processes. This can make it difficult for them to compete in fast-paced North American auctions. However, Japanese companies tend to pay a premium relative to their North American counterparts in exchange for their pace being accommodated. As Japanese outbound M&A continues to rise, we expect that Japanese buyers’ willingness to pay a premium will make them attractive alternatives to sellers looking to maximize value in M&A.