Canada experienced solid private equity deal activity throughout 2013. While there was marginal growth in deal volume from 2012 to 2013 (see Graph 1.1), the year ended with more announced deals than any other quarter since 2011 (see Graph 1.2). With deal volume in the Canadian private equity markets now practically at the volume level seen in 2007 before the onset of the financial crisis, we see a promising private equity environment in Canada for 2014.

This review of some of the latest developments in Canada’s private equity markets covers several noteworthy highlights, including the rise of financial buyers as M&A players, Canada as a continuing destination for international investment, and new indemnification trends in private purchase agreements—all of which have helped set the stage for Canadian deal-making dynamics in 2014.

The spike in deal volume at the end of 2013 can be attributed to a number of factors: the year’s high level of private equity fundraising, the availability of debt financing on favourable terms and fund life cycle considerations (such as expiring investment periods and fund terms), all of which should further encourage M&A activity this year as sponsors look to both invest new capital and exit investments to realize returns. 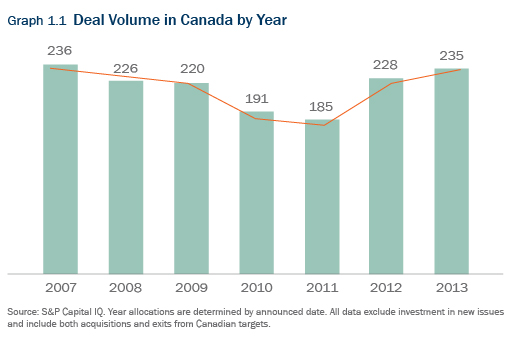 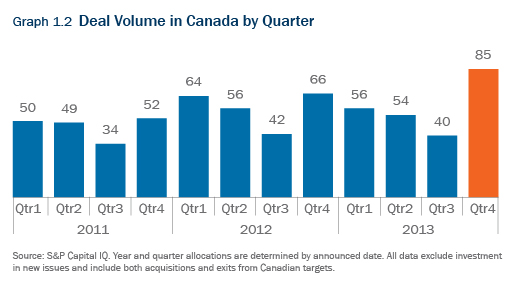 The Canadian private equity market continues to experience a decline in mega deals, with transactions valued under $250 million growing in market share (see Graph 2.1). The data suggest that most transactions involved a change-of-control as PE firms sought to acquire majority ownership of target businesses. This reflects the preferred investment approach for many Canadian PE firms (see Graph 2.2). 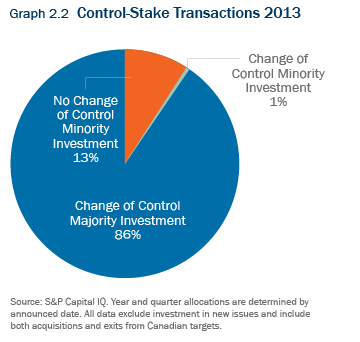 On the buy-side, availability of capital (both equity and debt) for private equity buyers in the Canadian market has spurred their successful participation in acquisition transactions. While strategic players continued to lead the Canadian M&A market in 2013, there has been a steady rise in the number of acquisitions by financial buyers of Canadian targets since 2010 (see Graph 3.1), a trend that should continue this year. As reported by peHUB Canada, fundraising activity by Canadian private equity firms reached a record high in 2013, and PE firms may feel pressure to deploy newly raised capital in the coming months.

In private M&A transactions that Torys has advised on over the last year, we have noted a marked decline in the use of earn-out provisions, which we attribute to strong valuations for attractive businesses, supported by the abundance of capital, including debt financing on favourable terms. This is in contrast to previous years where earn-outs may have been more favoured as a means to reconcile valuation differences between buyers and sellers.

On the sell-side, sponsor-to-sponsor transactions have increased significantly in the past year, with close to double the number of sales between financial players as an exit strategy as compared to 2012 (see Graph 3.2). With private equity firms owning more businesses than ever before, this strong pace should continue. We anticipate that sponsor-to-sponsor transactions will persist as some PE funds reach the end of their life cycles with assets to divest and other financial players have new capital available to deploy. 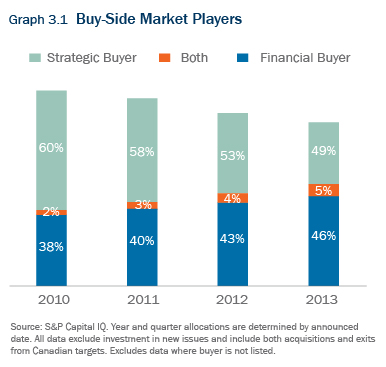 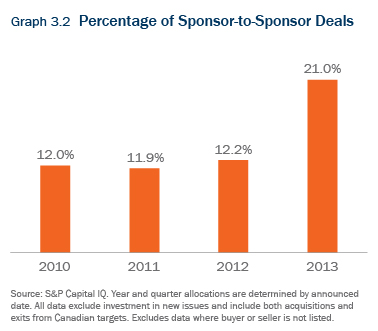 Foreign investors continue to have a substantial presence in the Canadian marketplace. Over the last four years, foreign investment represented nearly half of all Canadian M&A deal activity (see Graph 4.1). 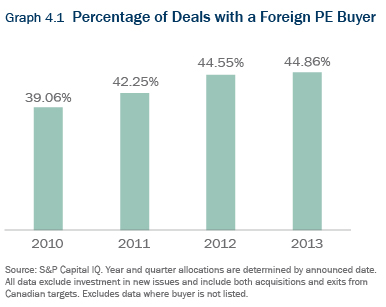 During this time, we have seen a growing interest by private equity players in Canada’s natural resources, with the opening of an office by KKR in Calgary being just one example of the ongoing draw of the sector for foreign investors. An analysis of private equity deal activity in 2013 by industry showed that the natural resources sector ranked first in terms of industry focus for investment activity (see Graph 4.2), although the technology and industrial sectors were equally popular—based on our experience, these are also areas of interest to foreign investors. 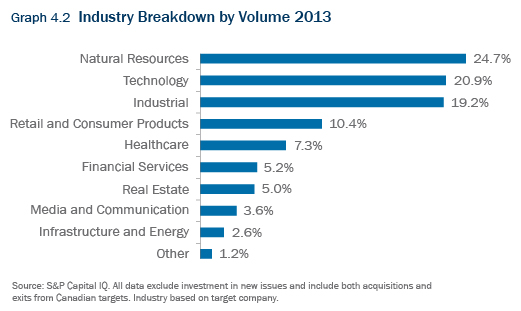 Post-sale indemnification trends in private M&A reflect the broader market developments noted above. In private transactions involving Torys last year, we have seen the percentage of deals with escrow provisions rise to nearly 60% (from just over 40% in 2012). The increasing use of purchase price escrow provisions to protect the buyer for post-closing claims against the seller in relation to contractual breaches is a development consistent with the prevalence of sell-side activity by PE funds. Buyers want financial security to support potential claims against private equity sellers who may either have fewer available assets to fund a claim post-sale following the distribution of realized returns to investors or are approaching the end of their life cycle.

Market practice is similarly evolving in relation to indemnity caps, baskets and general survival periods. An internal study of deals that Torys has advised on shows that since 2012, Canadian and U.S. practices continue to become further aligned. For instance, we noted that in the last year, indemnity survival periods on both sides of the Canada-U.S. border are converging toward 12 to 18 months, with deductibles becoming more common than “tipping baskets” in both jurisdictions. We also observed that the average indemnity cap continues to fall, further bringing Canadian practice in line with lower U.S. thresholds in the 10% -15% range of deal value. This continuing convergence of market practice in North American deal terms is the natural outcome of the growing presence of U.S. buyers in Canadian M&A activity.

In tandem with these indemnification developments, representation and warranty insurance is increasingly being used as a strategy to circumvent negotiation of these indemnity-related provisions in the purchase agreement and act as an alternative to escrow provisions. This approach is consistent with the rising incidence of sponsor-to-sponsor transactions. Representation and warranty insurance has the advantage of permitting private equity sellers to collect deal proceeds immediately and return capital to investors, with the added benefit of addressing any concerns that the buyer may have about the seller’s ability to honour its indemnification commitments post-sale following a capital distribution.

Despite private equity sell-side activity continuing to be prevalent in the Canadian market, we have also seen the resurgence of acquisitions in the private equity industry, a trend we expect to continue. A rise in the number of financial buyers, and the competition that should entail, is likely to spur the pursuit of different strategies by fund sponsors to get deals done. An example of this is a heightened focus on building sector-specific knowledge to compete effectively against strategic buyers in particular sectors, including oil and gas and mining. Sponsors are using their expertise in market sectors not only to improve their prospects during the acquisition process, but also to drive growth during the harvesting period of their investment.

More broadly, as private equity activity touches other sectors—particularly regulated industries—we anticipate that creative arrangements to address regulatory constraints will be pursued. For instance, in the health care professional field, certain regulatory restrictions prevent any person who is not a licensed health care professional from owning the shares of a professional corporation. On deals Torys has advised on, compliance with industry regulations is being addressed by creatively structuring acquisitions to allow PE buyers to share in the economic benefits associated with ownership of these regulated businesses. We expect that as PE buyers continue to pursue ongoing investments in a wide range of sectors, managing regulatory compliance will become an increasingly strategic priority.

These highlights of the latest developments in Canadian private M&A are indicators signalling that 2014 is positioned to be a strong year for private equity. From how foreign investment in Canada (including ever-growing investment from the United States) will affect deal-making, to where PE firms plan to dedicate their newly raised capital, it will be interesting to see how 2013’s stage-setting dynamics will play out in the market this year.