Some commentators have recently suggested that M&A transactions are taking longer to complete because antitrust and other regulators are more closely scrutinizing deals or are becoming more activist. We believe these concerns are overstated.

On the competition front, it is true that some recent merger transactions have faced relatively long reviews. However, we believe that the review timelines in many of these cases reflect the inherent complexity of the transactions, rather than a more interventionist approach by competition regulators.

Consider this: over the past five years, the average time for Canada’s Competition Bureau to complete reviews of mergers that triggered the issuance of a supplemental information request (SIR) – typically, the transactions that raise the most significant merger issues – has actually dropped by nearly one-third, from more than seven months in 2009 to just over five months in 2013. An important driver of this trend has been increasing reliance by both the Bureau and deal counsel on technology designed to speed up document production. We expect that as predictive coding – a technology that automates many of the time-consuming aspects of document review – gains acceptance in merger review, further timing efficiencies will be achieved. 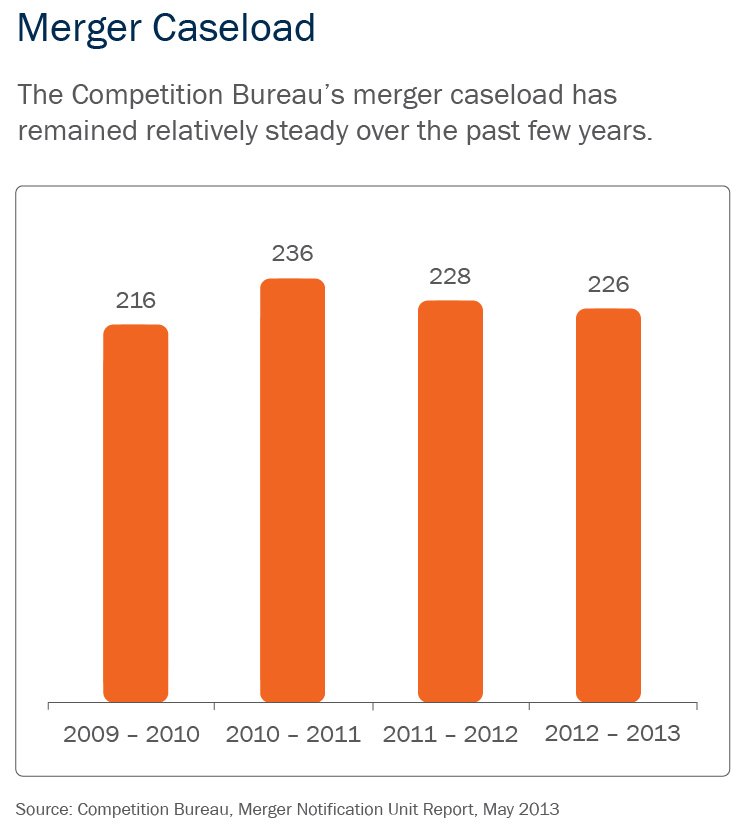 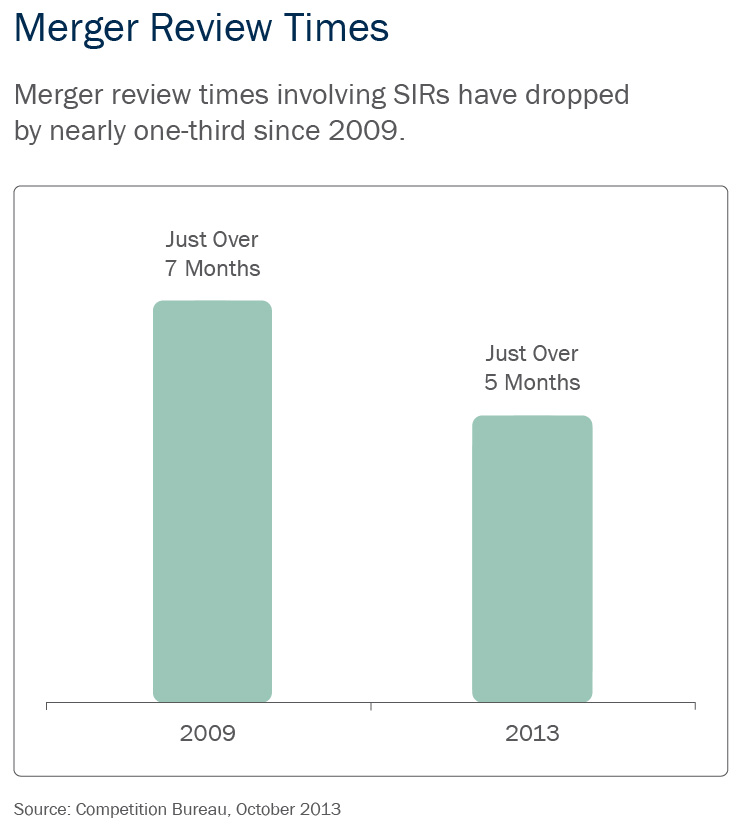 The Bureau is also taking a more pragmatic approach to merger review than it has in the past, particularly in those industries with which it has extensive experience. It recently scaled back the information that it requires from merging parties in connection with its review of upstream oil and gas transactions, and it is examining other areas in which review efficiencies can be achieved.

Controversial and complex foreign investment reviews made headlines in 2013, as they have for the past several years. However, for the most part, the limited information available suggests that median review times under the Investment Canada Act have not increased much, if at all, over the past five years.

In the United States, M&A transactions are, for the most part, also facing fewer timing hurdles. For example, between 2011 and 2012, the number of merger reviews in which a second request was issued by U.S. antitrust authorities decreased by more than 10%, and the incidence of early termination of the initial 30-day statutory waiting period increased by 5%. The limited information available on CFIUS filings is a bit harder to parse, but it does not suggest that regulatory concerns are causing more timing delays than in previous years.

While the large majority of North American M&A transactions now clear the competition and foreign investment review processes faster than similar transactions did just a few years ago – a trend that we expect will continue – there will be exceptions. Two main categories stand out.

The first category involves strategic transactions between major competitors – such as American Airlines’ acquisition of US Airways – which will continue to face rigorous competition reviews. Reviews of these transactions will take even longer when they involve markets that are inherently complicated to assess or with which competition regulators have little prior experience. In Canada, several of the Competition Bureau’s most complex recent transactions have been retail mergers, which typically involve numerous markets in which competitive effects must be assessed.

The second category involves controversial foreign investment transactions. In both Canada and the United States, we expect that transactions involving state-owned enterprises, “strategic” assets or those that otherwise give rise to national security concerns will remain outliers in terms of both review timing and outcome. Recent reviews suggest that, timing issues aside, the Canadian and U.S. governments are becoming more skeptical about certain types of foreign investments.

Tags:
Activism and Defence Board Advisory and Governance Competition and Foreign Investment Mergers and Acquisitions