Recent and proposed Canadian tax law changes will affect tax planning and structuring matters for cross-border and international transactions. The Canadian tax authorities have tightened tax rules on the use of partnerships as a favourable acquisition structure for foreign investors. New rules will also affect takeovers of Canadian targets and may make it more difficult to use bilateral tax treaties for foreign investment in Canada. The bottom line is that 2014 could potentially cost foreign investors more – in tax dollars.

The first set of changes affects M&A transactions that involve a transfer of an interest in a partnership. Tax rules have been significantly reinforced to expand the circumstances in which an interest in a partnership will be considered to be transferred to a tax-exempt entity, such as a Canadian pension plan. The rules have also been extended to apply, with a few exceptions, to non-resident foreign investors. Normally, on a transfer of a partnership interest, only half of the vendor’s capital gain realized on the transfer is treated as income. The rules relating to transfers to tax-exempt entities, which have now been extended to non-residents, are such that the vendor’s entire capital gain may be treated as income, triggering a greater tax charge for the vendor. This will apply only if the direct sale of the partnership’s underlying properties would have resulted in the partnership recognizing income that is not an ordinary capital gain.

These changes will need to be considered in structuring and determining the tax consequences of an M&A transaction implicating Canadian tax-exempt entities or non-residents. But the tax planning does not stop there – any joint venture set up as a partnership with these kinds of investors will also be affected. And while there may be, for example, economic benefits in forming an innovative joint venture to narrow pricing gaps between the buyer and seller (see article 7, Acquisition Financing in Canada Will Take Cues from the United States), the potential tax consequences of these venture structures should not be overlooked.

Related changes will also affect takeovers of Canadian targets by non-resident buyers using a Canadian acquisition vehicle. Foreign buyers have increasingly used partnership structures through which a Canadian target holds certain assets indirectly that the buyer wishes to reorganize within its corporate group. These assets, which may include inventory and resource property, are not directly eligible for a “bump.” (A bump allows the foreign buyer to adjust the tax basis of the assets and distribute them tax-efficiently outside Canada.) Previously the target’s interest in the partnership was eligible for the bump and could be transferred within the buyer’s group in order to shift the underlying assets. The new rules close this planning technique and greatly limit the buyer’s ability to obtain a bump in the tax cost of the partnership interest.

Finally, the government is consulting on initiatives aimed at restricting “treaty shopping.” Treaty shopping generally refers to circumstances in which non-residents strategically structure their investments in Canadian entities through foreign jurisdictions that have beneficial tax treaties with Canada. Although the consultation process is in its early stages, the government appears to favour unilateral action by Canada through a domestic anti-avoidance rule that would deny treaty benefits to transactions in which the “main purpose” is improper treaty shopping.

These potential initiatives, together with the new tax rules on partnership transfers and foreign affiliate dumping, represent a variety of significant implications for foreign buyers who are planning and structuring acquisitions of, or investments in, Canadian entities in 2014. 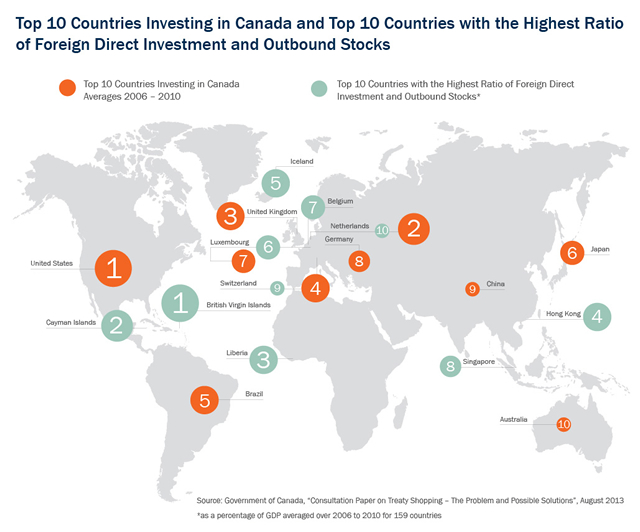