In Canada and the United States, it has long been typical for targets to be prevented from soliciting competing proposals through “no-shop” and “no-change-in-recommendation” covenants – but these covenants are often subject to a number of qualifications, the most significant of which are “fiduciary-out” provisions.

Fiduciary-out provisions give a target board the right to accept a superior proposal or otherwise change its recommendation to shareholders in order to get out of the deal with the acquiror. These provisions bring the parties’ competing interests into play. While an acquiror wants certainty that the deal will be done even if an alternative proposal for the target is made, the target board wants to ensure that it can appropriately execute its fiduciary duties regarding the change-of-control transaction, including getting the most favourable deal for the securityholders. In both Canada and the United States, the trend is for target boards to press for broader rights to change their recommendations.

In the United States, target boards increasingly demand broader rights that allow them to change their recommendation to shareholders in light of an “intervening event” – usually defined as a material change that was unforeseeable when the agreement was signed (other than a competing bid). The use of this right typically allows for the possibility that the acquiror and target will attempt to negotiate mutually acceptable changes to their agreement in light of the intervening event. The acquiror will typically also have the option to terminate the agreement if the target board changes its recommendation before any shareholder vote and thereby receive a break fee. Acquirors will often seek to restrict the scope of “intervening event” provisions so as to limit the target’s right to walk away from the deal. Exceptions to these provisions may include intervening events relating to the target’s industry or economy as a whole, changes in the target’s stock price, better-than-expected earnings or the timing of regulatory approvals.

“Intervening events” provisions may begin to appear in Canada, where we are seeing target boards increasingly seek greater flexibility within the terms of an acquisition agreement to change their recommendation to shareholders in the face of new information or changed circumstances. This is part of a broader trend toward more robust sales processes that we discuss in article 3, How Fair Is Fair? The Spotlight Will Be on the M&A Sales Process. There are also provisions that permit the target to disclose information to shareholders in circumstances in which the target board, acting in good faith and upon advice, believes the same to be necessary for it to comply with its fiduciary obligations or applicable laws. These provisions are sometimes described as “backdoor fiduciary outs” – although the target board is not expressly permitted to change its recommendation except in limited circumstances where it pays a break fee, the disclosure may arguably permit a “back door” change in recommendation, allowing a target board effectively to encourage shareholders not to support the transaction without triggering a break fee.

The broadest form of fiduciary out would be for the target board to insist on the ability to change its recommendation in order to comply with its fiduciary duties. The board may negotiate an unqualified right, before shareholder approval of the transaction, to withdraw, qualify or change its recommendation if it determines, in good faith and after consultation with external advisers, that the failure to do so would be inconsistent with its fiduciary duties. In that case, the acquiror will typically have the option to terminate and receive a break fee. If provided in the acquisition agreement, the acquiror could force the target to hold the shareholder meeting despite such change in recommendation. 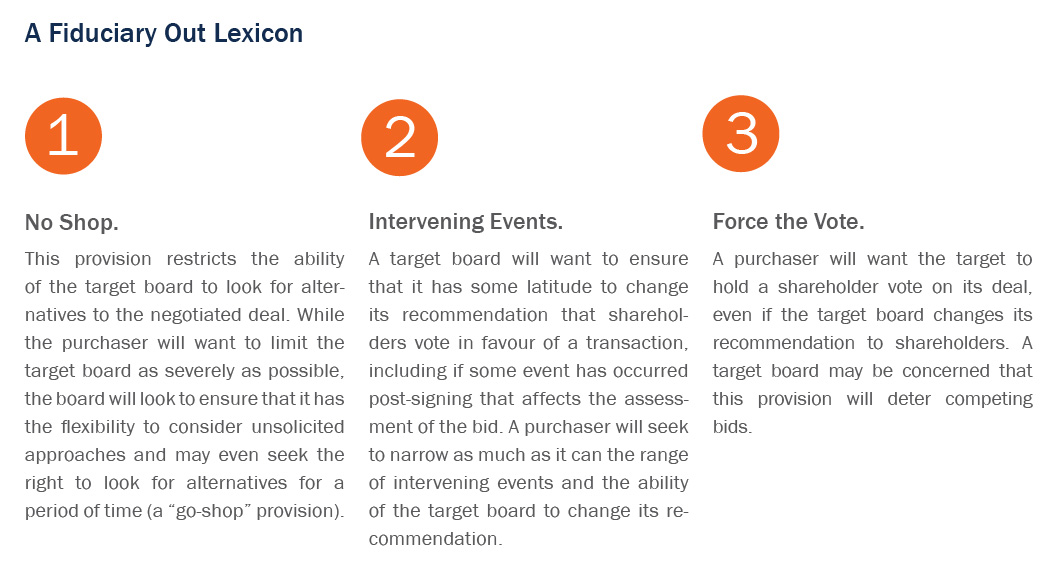 The scope of fiduciary-out provisions will continue to face scrutiny in court. The Delaware decision In Re Compellent Technologies, Inc. Shareholder Litigation is just one recent example of a long line of cases carefully examining the duties of target boards and the deal protection provisions utilized. In considering a settlement of that deal litigation, the Delaware Court scrutinized buyer-friendly no-shop and change-in-recommendation provisions in a merger agreement and found that, as originally negotiated, they had the effect of impairing the ability of the target board to obtain a higher price for shareholders.

As Canadian boards become more engaged on establishing a robust sales process, we expect that there will be greater focus in the upcoming year on the ability of target boards to exercise fiduciary outs. 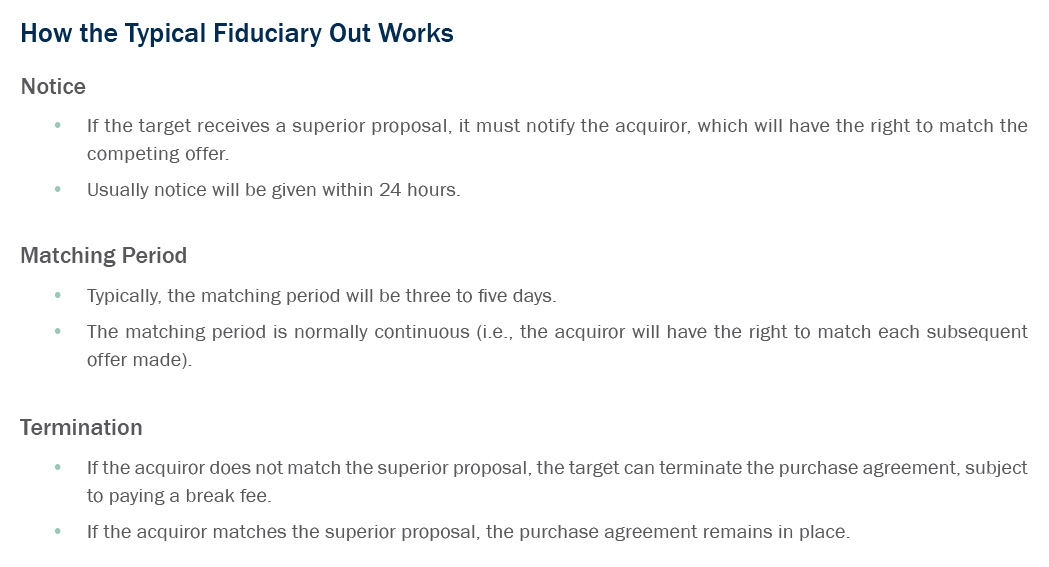