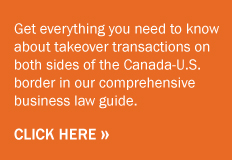 The Canadian Securities Administrators (CSA) released an update on their proposals to change the early warning and alternative monthly reporting regimes (for more detail on the proposals, read the bulletin below).

The CSA has decided not to proceed with:

However, the CSA intends to proceed with a number of other changes, including the requirement to disclose 2% decreases in ownership and provide enhanced disclosure in the early warning report. It also intends to make the Alternative Monthly Reporting System unavailable to "eligible institutional investors" as described in its initial proposal, but with additional clarifications.

The CSA notice can be accessed here. The CSA intends to publish final rule changes and guidance in the second quarter of 2015.

Canadian securities regulators are proposing to change the early warning and alternative monthly reporting regimes to require disclosure of acquisitions of public company securities at the 5% level rather than at the current 10% level. Another key proposal is to require certain derivatives to be included in the securityholding calculation. The objective is to increase transparency about significant holdings of public companies’ equity and voting securities, providing issuers as well as the marketplace generally with better information about major holders, their voting and equity interests and their investment intentions. Comments on the proposals are due by June 12, 2013.

The regulators’ view is that the current 10% disclosure threshold is at odds with the fact that 5% securityholders may have the power to influence control of the company; such influence includes their ability, under most corporate statutes, to requisition a shareholders’ meeting. A 5% reporting threshold would match the longstanding U.S. rule; however, a key remaining cross-border difference would be that SEC rules do not require public disclosure until 10 days post-acquisition, whereas Canadian rules require prompt disclosure post-acquisition. As a result, adopting a 5% reporting threshold in Canada would prompt much earlier public disclosure than would be required in the United States.

Once an early warning report is filed that signals a 5% or more ownership interest, disclosure would be required not just for increases, but also for decreases, of 2% (2.5% for alternative monthly reports) or more. In addition, disclosure would be required when the ownership percentage fell below 5%. The regulators are seeking comment on whether the moratorium on acquiring additional securities for one business day after filing an early warning report should apply at the 5% level or continue to apply at the 10% level.

To address the concern that early warning disclosure sometimes consists of boilerplate that provides little useful information to the market, the regulators are proposing to require more detailed information about the acquiror’s purpose and intentions with respect to the company – for example, to make further acquisitions of the company’s securities, to engage in any material transaction such as a merger or sale of assets, to solicit proxies from securityholders, to adopt takeover bid defensive measures, to change the board of directors or management, or to have the company’s securities delisted.

Derivatives Must Be Counted

In determining whether the 5% reporting threshold has been reached, the proposed rules would require certain derivatives to be included in the ownership calculation, such as total return swaps and contracts for differences, if they are substantially equivalent in economic terms to conventional equity holdings. These derivatives would be defined as "equity equivalent derivatives." A derivative would be considered an equity equivalent derivative if the dealer counterparty or other market participant counterparty taking a short position could substantially hedge its obligations by holding 90% or more of the specified number of underlying or reference securities. (This type of derivative can typically be "closed out" and "converted into" a direct holding of the underlying securities by the purchaser of the derivative by cash-settling it and using the proceeds to acquire the securities from the counterparty.) On the other hand, partial-exposure instruments, such as options and collars that result in limited exposure to the reference securities, would not be considered equity equivalent derivatives – although the regulators could exercise their public interest jurisdiction in cases where the use of partial-exposure instruments is abusive.

These proposals are meant to address securities regulators’ concern that derivatives transactions can undermine the early warning regime and reduce the transparency of the capital markets by permitting acquirors to accumulate substantial economic interests in public companies without disclosure. The proposed new rules would require acquirors to disclose in their early warning reports the material terms of derivative arrangements, including the actual or notional number or principal amount of underlying securities.

Disclosure by Securities Borrowers and Lenders

Borrowing and lending transactions involving public company securities need to be considered under existing early warning and alternative monthly reporting requirements. What is being proposed is that the terms of securities lending arrangements would no longer be exempt from disclosure in early warning reports, and dispositions of 2% (2.5% for alternative monthly reports) or more through lending arrangements would have to be disclosed under the reporting requirement for decreases; however, the regulators are proposing to exempt lenders from this latter requirement in cases where they have an unrestricted ability to recall the securities before a shareholders’ meeting. This new exemption may not apply to certain securities lending arrangement agreements with agents.

Changes to Use of Alternative Monthly Reporting Regime

Changes are also proposed to the ability to make use of the Alternative Monthly Reporting System (AMRS) by eligible institutional investors (EIIs). EIIs are currently prevented from using the AMRS if they intend to make a takeover bid for the subject company’s securities or acquire a controlling interest through a merger, plan of arrangement or similar transaction. The proposed rules would also prevent EIIs from using the AMRS if they solicit, or intend to solicit, proxies from securityholders on matters relating to the election of directors or a merger, arrangement or similar transaction involving the securities of the reporting issuer. This proposal would bring the Canadian regime closer to the U.S. regime, under which institutional and passive investors are subject to less onerous beneficial ownership reporting requirements, provided they are not acquiring securities with a view to influencing control of the company, including through a proxy contest.