Public infrastructure projects require a coordinated effort by government sponsors, engineers, contractors, service providers and advisers. They also require capital investment in staggering amounts: estimates for planned infrastructure investment are in the range of US$40 trillion globally by 2050, comprising €2 trillion in the European Union by 2020, £500 billion in the United Kingdom by 2020 and C$200 billion in Canada by 2020. The recent €100 billion rescue of Spanish banks pales in comparison.

There is a clear and growing role for capital markets in the infrastructure field, as governments continue to add capital and stir. That simplified recipe captures the broad theme of the infrastructure finance market. Yet the particular ingredients and proportions vary greatly across projects and throughout the life cycle of these long-term investments.

Capital investment in infrastructure is increasing rapidly, and the infrastructure assets are maturing. The projects themselves are now revolving through different stages and transactions, and the capital markets are increasingly active in that evolving market.

Not surprisingly, a capital need of this magnitude has generated significant attention, promoting the ascent of infrastructure as a newly recognized asset class for institutional investors and financiers. Public finance alone is unlikely to provide the complete solution. In Canada, for example, the planned rate of infrastructure investment is 6 to 10 times the historical rate. Governments simply cannot meet this need alone – particularly in an era of economic austerity – and are looking to the private sector to help mitigate and distribute the financial burden over the long-term life of the infrastructure assets being financed.

One such approach is to conclude a public-private partnership (PPP) or alternative finance and procurement (AFP) transaction in which a private sector partner will design, build, finance and maintain a public sector infrastructure asset over a period of 20 to 30 years, then hand the asset back to the public sector. A PPP transaction transfers considerable risk to the private partner and contains a performance-based payment mechanism that requires an infrastructure asset to be both built and operational to a specified standard over decades. This approach has repeatedly demonstrated good value for money for the public sector. The PPP approach is not a panacea but has swiftly become a commonly accepted option for public infrastructure transactions, with 170 Canadian projects valued at over C$55 billion completed or underway, most within the last decade.

The capital investment in a greenfield asset represents only the beginning of its decades-long life cycle and is followed by a construction stage, an operations and maintenance stage and a hand-back event. Through the life of the infrastructure asset, its financial attributes and risks will change, and the natural and optimal debt and equity financing approaches will evolve in tandem (as shown in this figure). 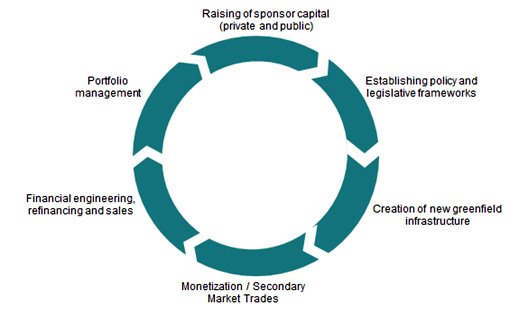 The recent surge in infrastructure projects preceded any planned raising of sponsor capital for that dedicated purpose. In the early stages, equity capital was found among construction proponents, redeployment of real estate and private equity allocations from other established funds, and foreign funds already established for more mature PPP markets in other jurisdictions. More recently, we have seen increasing allocations to infrastructure among pension funds, specialty private placement funds in Canada and the U.K., and the initial public offerings of specialty listed infrastructure funds. For example, Bilfinger Berger Global Investments was listed on the LSE in December 2011 and has a current market capitalization of approximately £225 million. It has a focus on operational or near-operational assets that are beyond the greenfield development phase. Part of its seed investment includes an equity interest in three operational Canadian PPP transport projects. 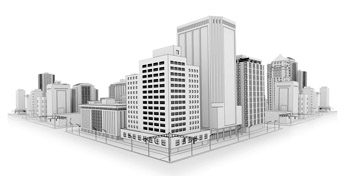 As noted above, there has been a surge in greenfield project development and financing. In the early stages, the Canadian PPP project finance market was dominated by long-term European bank lending and occasionally by monoline-insured debt, with limited Canadian capital market financing. As the volume and tenor of European bank financing diminished and monoline insurance became unavailable in Canada, the Canadian capital markets moved smartly to fill the gap, first in long-term debt and more recently also in short-term debt.

The short-bank/long-bond hybrid financing structure was one response to the global financial crisis and yielded some significant long-dated capital markets activity. For example:1

The capital markets have been increasingly active also in shorter-dated bonds, for example:

Following the relatively high-risk construction phase, during the operational phase many infrastructure projects are considered to be de-risked with post-construction revenues that, although performance-based, are relatively predictable – often supported directly or indirectly by government, and at times GDP- or inflation-linked. In short, perfect matches for pension funds and other investors seeking stable long-term cash flows that yield a premium to government direct securities, but with lower risk and volatility than some other private investments. It is often said that the natural “first trading date” for PPP projects is five to seven years after construction once the project has reached this transition stage.

There has been an active secondary market in the international markets, where many projects have already reached that stage of maturity. For example:

There have been fewer such transactions in the Canadian market, largely because our relatively young PPP market has not yet had many projects achieve that state of maturity. It’s reasonable to predict that that will change as the projects themselves mature. It is also likely that funds with a low cost of capital (whether tax-exempt funds, listed funds, unlisted funds, strategic investors or otherwise) will emerge as the natural long-term equity investors in those projects.

1 Financial information is as published in InfraNews and Infrastructure Journal.