Break fees, whether payable by the buyer or the seller, are all about the allocation of the risk of the deal not closing. They serve as compensation, in whole or in part, for the payee's out-of-pocket and other costs associated with the failure of the deal. If the amount of the fee exceeds the benefits to the payor of not closing, the fee is an incentive to consummate the deal. However, if a payor would be better off paying the fee and walking away from the deal with the payee's enforceable rights limited to the break fee, then the fee is effectively the strike price for an option and an incentive for non-consummation.

Break fees payable by the seller have long been a feature of the M&A landscape. Delaware law requires the seller’s obligation to close to be subject to a "fiduciary out" in the event of a superior proposal from a third party; this has become a standard term in all U.S. and Canadian M&A deals. Equally standard is provision for the seller to pay a break fee to the buyer in the event of the seller’s exercise of the fiduciary out. Delaware courts, relying on fiduciary principles, regulate the permissible amount of break fees payable by the buyer in order to protect against fees that, by their size, would effectively preclude a superior proposal, defeating the purpose of the fiduciary out. This Delaware fiduciary limitation has also become market practice in the United States and Canada. 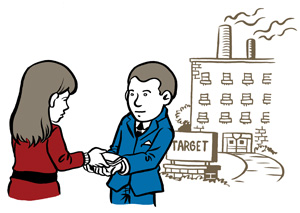 Reverse break fees first appeared in the private equity context. In the usual private equity deal, the buyer is a shell that, while sponsored by a private equity firm, is not backstopped by the firm; the buyer’s ability to close and its legal obligation to do so typically used to be conditional on financing being available. This left sellers exposed to all of the costs of a failed deal if the buyer could not close, or even if the buyer simply would not close in breach of its contractual obligations (since the usual contractual remedies for breach – specific performance and damages – are unlikely to be meaningful against a buyer that is a shell).

In the absence of meaningful legal recourse for the seller against the buyer, there was inherent optionality to the private equity deal structure. Reverse break fees effectively put a price on the buyer's option. However, perversely, the pricing of the option did not utilize any normal option pricing technique. Rather, the reverse break fee typically simply matched the break fee stipulated for the seller. This was so despite the fact that costs to the seller of a failed deal (which could include business disruption, potential loss of senior management and valuation backlash in the market) likely exceeded the costs of a failed deal faced by the buyer – and despite the fact that the fiduciary limitations on a seller's break fee are not applicable to a reverse break fee (since the size of a reverse break fee is generally irrelevant to the prospects of a superior proposal being made for the seller).

The lack of thought given to the pricing of reverse break fees resulted in the mispricing of what amounted to a buyer’s option and led to many "option exercises" on transactions struck before the credit crisis that ran into financing difficulties or became unattractive to buyers after the onset of the crisis. This experience has led, since the credit crisis, to more careful thought in the pricing and structuring of reverse break fees.

What Are the Trends in Reverse Break Fees?