Governments around the world are facing intense pressure to meet a daunting set of challenges: increase revenue, reduce debt-to-GDP ratios, upgrade aging infrastructure assets and operate more efficiently. How to "do more with less" is not a new conundrum, and a frequent government response has been to adopt a strategy of "more steering and less rowing" in the delivery of public infrastructure and services. Recent global financial and fiscal pressures suggest governments will be compelled to accelerate the transformation of their business models so that they become more of a regulator and less of a direct owner and operator of capital-intensive activities. 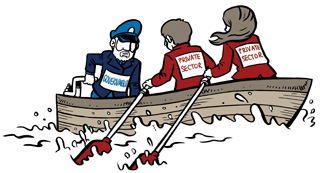 For the private sector, a newly restructured set of relationships with government (whether as regulator, counterparty, vendor or partner) could be equally profound. McKinsey identifies the "rise of the market state" as one of the five global forces that are rewriting the list of opportunities and challenges facing business. We agree with the McKinsey view that government is likely to play an even larger role in the next decade. And we think 2012 will be a year in which governments will be key players in driving M&A activity in Canada, the United States and around the world.

Governments will be forced to make increasingly difficult decisions on whether and how to ration and reallocate their precious resources. They will be drawn to exploring different types of business relationships and transactions with the private sector to accomplish their fiscal goals, including

Tough fiscal environments often generate the loudest calls, from both inside and outside government, urging privatization through asset sales. Today, investors – both strategic and financial – are carefully monitoring opportunities for government assets to be put on the block in the PIIGS countries – Portugal, Italy, Ireland, Greece and Spain. Other countries, including Canada, Australia, the United Kingdom and the United States, are openly discussing privatizations – and not just on a one-off basis, but through implementing programs that will enable them to systematically identify assets that may be appropriate for divestment. Privatization is not just a national phenomenon. States, provinces, municipalities and cities are also looking at monetizing mature infrastructure assets to get their fiscal feet back under them.

Privatization is a permanent disposition and can be accomplished through different processes, including private sales, auctions and initial public offerings. Privatization often involves a companion exercise to clearly define the privatized activity: bundling similar businesses, commercializing a distinct business or carving out minority stakes or individual assets (such as power plants or transmission lines from a large utility).

There will be no lack of capable and funded buyers for these government-held assets – particularly the dependable income-generating infrastructure assets and businesses that are thought of as being recession-proof.

As an alternative to outright privatization, governments could opt to enter into arrangements with the private sector that are of limited scope and duration. Joint ventures can involve shared public and private ownership, with an objective to improve operating performance. Concessions grant a private partner a limited duration right to carry on a government business for a fee, transferring the responsibility for capital investment. In either case, the transaction preserves public ownership and defers the decision on whether a full privatization would ultimately be desirable. Governments have also been turning to the private sector to provide some of the services that were historically directly provided through a government monopoly. For example, a number of U.S. states and Canadian provinces already permit private market competition for liquor sales and gaming facilities, within regulatory parameters set by government.

Despite fiscal pressures, governments recognize the need to continue to invest in infrastructure, both to remedy a significant infrastructure deficit and to create a context that will attract business investment, driving economic growth and ultimately stabilizing tax revenue. Governments frequently turn to PPP or alternative financing and procurement (AFP) transactions to design, build, finance, maintain and/or operate new infrastructure; distribute the cost of new infrastructure across decades; manage life cycle costs; transfer significant project and financial risks to the private partner; and preserve public ownership where appropriate.

Canada has developed a very active market in these PPP transactions in the past decade and is now one of the most active markets globally, with approximately 160 such transactions currently underway. The United States is less active currently, but is developing a legislative framework in multiple states and will likely become more active.

The United States has seen some monetization of mature toll roads and bridges. Canada has a young PPP market, and restrictions on equity transfers for one or two years following “substantial completion” have limited the secondary market in PPP equity to date. That may change in 2012 as more projects become more easily tradable under the underlying project agreements. Interest in this area is growing among pension funds and other deep capital pools, and a number of listed and unlisted European funds have been established to recapitalize captive and third-party equity interests in PPP contracts.

Given the particular asset classes and parties involved, government-driven M&A activity can involve some unusual bells and whistles. Being sensitive to the different contexts and imperatives will be key to concluding successful transactions with government. Here are a few: